In an Exclusive U.S. Interview, Democracy Now! Talks with the Widow of the Al Jazeera Journalist Who Died When U.S. Forces Shelled His Office in Baghdad

“Look at the American Dream and how it was Implemented Here: We Lost Our Happiness, We Lost Our Lives, We Lost Our Liberty,” says Dima Tahboub who is suing Iraq war commander General Tommy Franks for war crimes.

An anonymous adviser to the Prime Minister of Belgium told the Agence France Presse the Belgian government will block a lawsuit filed there against the US commander in the Iraq war for alleged war crimes.

Seventeen Iraqis and two Jordanians filed a suit against General Tommy Franks this month. The lawsuit accuses US troops of using cluster bombs in civilian areas and firing on ambulances in three separate incidents.

The lawsuit is brought under a law in Belgium called the “universal competence” law. That law allows charges to be brought regardless of where the alleged crimes took place.

But under US pressure, Belgian lawmakers in early April amended the law, enabling federal prosecutors to decide whether a suit can proceed.

The anonymous advisor told the AFP the prime minister will call a special cabinet session this week to apply the amended law, and stop the lawsuit.

The BBC reported last week that the Jordanian plaintiffs are the widow and the father of Tareq Ayoub.

On April 8, US forces bombed the Baghdad offices of Al Jazeera, killing correspondent Tareq Ayyoub. Moments later and less than a mile away, another explosion, reportedly from U.S. artillery, damaged the offices of Abu Dhabi TV, trapping as many as 30 journalists in the debris. And then, a US tank fired on the Palestine Hotel, where almost all the international journalists were staying. A Ukranian cameraman with the Reuters news agency Taras Protsyuk, and Jose Couso, who worked for Telecinco Spanish televison, were killed.

That evening, Al Jazeera broadcast an interview with the widow of Tareq Ayyoub, Dima Tahboub. Tears streamed down her face. She said:

?American forces, British forces are in a war that was claimed to be clean.? I cannot see the cleanness in this war. What I see is blood, destruction and shattered hearts.?

She said, ?The Americans said it was a war against terrorism. Who is doing the terrorism now??

She said, ?My message to you is that hatred grows more hatred. The Americans are asking why are there suicide bombers, which we do not consider as such, we consider them as martyrs. Let them ask Bush and Blair who targeted their families and friends.

We are joined right now on the telephone by Dima Tahboub from her home in Jordan. She cannot comment on the lawsuit at this time.

The original content of this program is licensed under a Creative Commons Attribution-Noncommercial-No Derivative Works 3.0 United States License. Please attribute legal copies of this work to democracynow.org. Some of the work(s) that this program incorporates, however, may be separately licensed. For further information or additional permissions, contact us.
NEXTU.S. Bombing of Basra Kills One Iraqi Boy and Wounds His Brother. Their Mother, Umm Haider, Speaks About Her Family?s Plight. 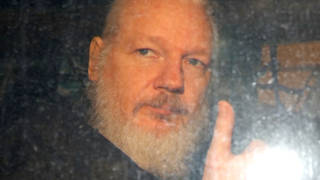