Isabel Allende’s latest book, My Invented Country: A Nostalgic Journey Through Chile is a memoir and a reflection on exile. She writes on 9-11 in 1973 she lost a country, and on 9-11 2001, she gained one.

Allende is author of eight books and two memoirs. Her books have been translated to more than 27 languages. They have been best sellers in Europe, USA, Latin America and Australia.

Born in Lima, Peru, in 1942, Allende traveled the world as the privileged daughter of a prominent family. Her uncle was the Chilean President, Salvator Allende. As a journalist in Chile, she worked for various television shows, movie documentaries and magazines.

In 1973 her uncle was overthrown and assassinated in a CIA backed coup. Afterwards, her family fled to Venezuela where Allende continued to work as a journalist for the newspaper El Nacional.

Her debut novel in 1982, The House of the Spirits, chronicled four generations of a Chilean family through the tumult of that country’s political history. It is a history that is intertwined with Allende’s own.

Allende’s latest book, My Invented Country: A Nostalgic Jouney Through Chile, is a reflection on exile. It traces the author’s personal history bookended by two defining moments in the author’s life- the Sept. 11th 1973 death of her Uncle and the Sept. 11th 2001 attack on the World Trade Center.

The original content of this program is licensed under a Creative Commons Attribution-Noncommercial-No Derivative Works 3.0 United States License. Please attribute legal copies of this work to democracynow.org. Some of the work(s) that this program incorporates, however, may be separately licensed. For further information or additional permissions, contact us.
NEXTThe Weather Underground: A Look Back at the Antiwar Activists Who Met Violence with Violence 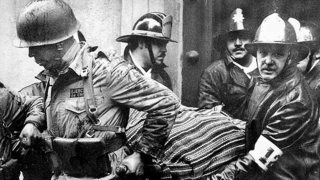