We hear the words of Malcolm X, 39 years after he was assassinated in New York City on Feb. 21, 1965. We’ll hear an excerpt of his speech “The Ballot or the Bullet.” [includes transcript]

Tomorrow is the 39th anniversary of the assassination of Malcolm X, one of the greatest leaders this country saw in the last century.

On February 21, 1965, he was shot to death as he spoke before a packed audience in Harlem’s Audubon Ballroom. He was just 39 years old.

We turn now to a speech Malcolm X gave in Detroit just a year before he was gunned down. It is known as 'The Ballot or the Bullet.'

MALCOLM X: Once you change your philosophy, you change your thought pattern. Once you change your thought pattern, you change your attitude. Once you change your attitude, it changes your behavior pattern. Then you go on into some action. As long as you have to sit-down philosophy, you will have a sit-down thought pattern. As long as you think that old sit-down thought, you will be in some kind of a sit-down action. They’ll have you sitting in everywhere. It’s not so good to refer to what you are going to do as a sit-in. That right there castrates you, right there it brings you down. What goes with it? Think of the image of someone sitting; an old woman can sit, an old man can sit. A chump can sit. A coward can sit. Anything can sit. Well, you and I have been sitting long enough, and it’s time today for us to start doing some standing and some fighting to back that up. When we look at other parts of this earth upon which we live. We find that black, brown, red, and yellow people in Africa and Asia are getting their independence. They are not getting it by singing, “we shall overcome.” No, they are getting it through nationalism. It is nationalism that brought about the independence of the people in Asia. Every nation in Asia gained its independence through the philosophy of nationalism. Every nation on the African continent that has gotten its independence brought it about through the philosophy of nationalism. It will take Black Nationalism to will bring about the freedom of 22 million Afro-Americans here in this country for we have suffered colonialism for the past 400 years. 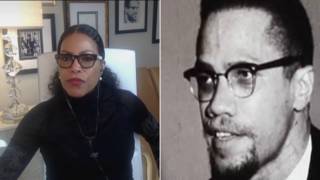