In a historic civil rights showdown, they demanded to be seated at the all-white delegation. The co-founder of the Freedom Party was Fannie Lou Hamer, the granddaughter of a slave who was raised on a plantation in Mississippi by her sharecropper parents. Hamer became involved in the civil rights movement when she volunteered to attempt to register to vote in 1962. By then 45 years old and a mother, Hamer lost her job and continually risked her life because of her civil rights activism.

In a striring address, she testified before the Credentials Committee at the 1964 Democratic National Convention. The Credentials Committee meeting was to be televised, until President Johnson held a “last minute” press conference at the exact same time. Many felt the move was to keep the public from hearing any negative comments about the Party. But the move backfired because the press still covered the event and was able to broadcast highlights on the evening news.

Ossie Davis and Ruby Dee at the Democratic National Convention last night. Poet Maya Angelou also stepped up to the podium to pay tribute to Fannie Lou Hamer. She was joined on the stage by elderly members of the Mississippi Freedom Democratic Party. This is Maya Angelou.

AMY GOODMAN: At the beginning of the evening, Fannie Lou Hamer was honored. 40 years ago a group called the Mississippi Freedom Democrats traveled by bus to the 1964 Democratic National Convention in Atlantic City to challenge white domination of the Mississippi Democratic Party. In an historic civil rights showdown, they demanded to be seated at the all-white delegation. The cofounder of the Mississippi Freedom Democratic Party was Fannie Lou Hamer, the granddaughter of a slave, who was raised on a plantation in Mississippi by her sharecropper parents. Hamer became involved in the Civil Rights Movement when she volunteered to attempt to register to vote in 1962. By then, 45 years old and a mother, Hamer lost her job and continually risked her life because of her civil rights activism. In a stirring address, she testified before the Credentials Committee of the 1964 Democratic National Convention.

FANNIE LOU HAMER: The land of the free and the home of the brave. We have to speak with our telephones off of the hook because our lives be threatened daily because we want to live as decent human beings in America. Thank you.

OSSIE DAVIS: For African Americans in the South at mid-century, the injustices had become routine.

RUBY DEE: If you were thirsty, you had to go to a water fountain for colored people. And you had to hope that that fountain was working. And it wasn’t broken.

OSSIE DAVIS: If you needed a ride, you had to move to the back of the bus. And even if you could afford to travel by car, you had to drive miles out of your way to find a hotel that would take you. Long terrifying miles down dark country roads, patrolled by the local chapter of the Ku Klux Klan.

RUBY DEE: And you had to hope that the single bare light bulb in your motel room hadn’t burned out. And if you went to school, you had to get used to learning the same thing every year because your district had only one teacher.

OSSIE DAVIS: These were some of the experiences of millions of black people, including one woman named Fannie Lou Hamer. [cheers]

OSSIE DAVIS: Born to a sharecropping family in rural Mississippi, she worked on a farm for the first 44 years of her life, toiling under the unjustices of Jim Crow.

OSSIE DAVIS: Her life was anything but ordinary.

RUBY DEE: Enduring…she endured harassment and physical threats. Despite all that, she registered to vote. And for that, she lost her job.

OSSIE DAVIS: Then, she helped others register to vote. And for that, she was arrested and nearly beaten to death on the jailhouse cell floor.

RUBY DEE: But, she pressed on. She became one of the founders, one of the leaders, of a Mississippi Freedom Democratic Party. [cheers]

OSSIE DAVIS: They came to the Democratic Convention in 1964 to protest the disenfranchisement of African Americans and the absence of any blacks in the Mississippi delegation.

RUBY DEE: And there, before millions watching on television, she spoke of her ordeal. What she did, she gave a voice to all of us who wanted more. Who dreamed of a possibility of better days. She reminded us of our basic values and our purpose. And she helped this nation find its way again.

OSSIE DAVIS: 40 years later, we stand before the most diverse convention in the history of the Democratic Party. [cheers] More African Americans, Asian Americans, Native Americans, and Latinos are here than ever before. [cheers]

OSSIE DAVIS: Fannie Lou Hamer’s single decision to stand up and be counted brought us here!

RUBY DEE: Yes. [cheers] She guided us…she guided us out of the wilderness of death threats and disenfranchisement, of lynching and literacy tests of segregation and second-class status. One woman from Mississippi did this. One voice lifted so many. All of us.

AMY GOODMAN: Actors and civil rights activists Ossie Davies and Ruby Dee at the Democratic National Convention last night. Poet Maya Angelou also stepped up to the podium to pay tribute to Fannie Lou Hamer. She was joined on the stage by the original, now elderly, members of the Mississippi Freedom Democratic Party. This is Maya Angelou.

MAYA ANGELOU: Good evening Americans. Quote, I question America. Is this America? The land of the free and the home of the brave where we have to sleep with our telephones off the hooks because our lives be threatened daily? Because we want to live as decent human beings in America? Thank you. Unquote. Fannie Lou Hamer. It is important that we know that those words came from the mouth of an African-American woman. It is imperative that we know that those words came from the heart of an American. Frederick Douglass…Frederick Douglass, Patrick Henry, all the black men and black women and white men and white women through the years have asked questions of ourselves. Because in the most private part of the heart of every American lives a burning desire to belong to a great country. To represent a noble-minded country where the mighty do not always crush the weak and the dream of democracy is not in the sole possession of the strong. It is fitting tonight that delegates—you and I—hear the questions raised by Fannie Lou Hamer 40 years ago. It is fitting that every American, everywhere, ask herself and himself these questions: What do I think of my country? What is it in my country which elevates my shoulders and stirs my blood when I hear the words “the United states of America”? Do I praise my country enough? Do I laud my fellow citizens enough? Then there’s what is there in my country which makes me hang my head and avert my eyes when I hear the words 'the yet-to-be-United States of America'? What am I doing about it? Am I like one who sits high and looks low and pretends I see nothing? Am I relating my disappointment to my leaders and my fellow Americans? As Americans, we should not be afraid to own both the questions and the answers. Down pyramids of years we have asked these questions of ourselves and we have had some answers. Patrick Henry said “I know not what course others may take, but as for me, give me liberty or give me death.” George Moses Horton, poet, black man, born a slave, said: “Alas. And was I born to wear this brutish chain? I must slash the handcuffs from my wrists and live a man again.” The human heart is so delicate. We are so powerful that we need to ask ourselves: what do we do in a democracy about making a democracy stout and strong and robust? Frederick Douglass said, “the thought of being a creature just of the present and the past was troubling. I long for a future, too.” The love of democracy motivated Harriet Tubman to seek and find freedom for herself, but not just for herself. She went back innumerable times to the slave South to gain liberties for slaves and also to instill in the minds of Americans that it is possible and plausible to own the dream which is freedom and liberty and democracy. Fannie Lou Hamer and the Mississippi Freedom Democratic Party were standing on the—on the shoulders of history— when they sought to unseat evil from its presumed safe perch on the back of all American people. It is fitting that we honor those dreams of the people who thought: we can get rid of evil, the evil of ignorance, by seating the Mississippi Freedom Democratic Party. We are honored that they are with us here tonight. Because of their gifts to us—[cheers]—their gifts to history, because of their gifts to our future, may I ask you, please, let us support and agree and salute the surviving members of the Mississippi Freedom Democratic Party. [cheers] 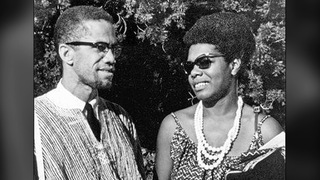 “Maya Angelou: And Still I Rise”: First Film on Writer and Activist Chronicles an Extraordinary Life