In this first week of Black History month, we pay tribute to the great actor, singer, athlete, scholar: Paul Robeson. We hear a recording of Robeson, courtesy of the Pacifica Radio Archives. [includes rush transcript]

We end today’s program at the start of Black History Month with a tribute to the great actor, singer, athlete, scholar: Paul Robeson.

The son of an escaped slave, Robeson was attacked, blacklisted and hounded by the government for his political beliefs. For years, Robeson was tracked by the FBI as well as the CIA, Department of State, and numerous other government agencies. Together they compiled tens of thousands of documents on him, which they used to bring him before McCarthy”s House Un-American Activities Committee. In 1949 Robeson was effectively blacklisted, and in 1950, the government revoked his passport. For eight years he was barred from travel, a prisoner in his own country.

During the years he was blacklisted, the songs and words of Paul Robeson were broadcast by Pacifica Radio. This is a tribute to him compiled by the Pacifica Radio Archives.

Web ExclusiveJul 26, 2021From the Archives: Civil Rights Leader Bob Moses in 2010 on Fighting for Equality in Law & Education

AMY GOODMAN: When whitelisted from almost every public in this country, Paul Robeson could be heard over the airwaves of Pacifica Radio.

NARRATOR: The Pacifica Radio Archives celebrates Black History Month by honoring the voices of a revolution. From the Montgomery bus boycott to the Black Power Movement to the fight for reparations, Pacifica was there.

HAROLD WINKLER: Do you think there’s been a change in the attitude of the Negro churches toward militant political and economic action, Mr. Robeson?

PAUL ROBESON: I think there has, because it’s history, you know. Take Frederick Douglass. I belong to the AME Zion Church. There’s one in this area, and Douglass was a part of that church. Harriet Tubman, who formed the Underground Railroad, who was called the Moses of our people—they sang “Go Down Moses” when she came into the South to free the slaves. And Harriet Tubman. And we have a tradition of tremendous, consistent speaking out, you know, for our rights, like in the whole civil rights struggle. I mean by “militant” making people know that you want to be free like anybody else. And I think the churches, however—a lot of the responsibility still rests upon our churches, because that’s where so many of our people, you know, go. They have tremendous influence, too.

NARRATOR: That was Paul Robeson from an interview with Elsa Knight Thompson and Harold Winkler recorded on February 8, 1958, at Pacifica Radio station KPFA in Berkeley. The airwaves of Pacifica Radio stations included some of the most important African American thinkers, artists, poets, writers, speakers and activists of the 20th century. Listen to these voices and you will hear their dreams and demands for the political, social and economic restructuring of America. To find out more, visit our website at pacificaradioarchives.org.

From the Archives: Civil Rights Leader Bob Moses in 2010 on Fighting for Equality in Law & Education 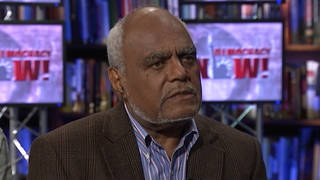 From the Archives: Civil Rights Leader Bob Moses in 2010 on Fighting for Equality in Law & Education