Ossie Davis 1917-2005: A Tribute to the Actor and Civil Rights Activist

Actor and civil rights activist Ossie Davis died Friday in Miami Beach. He was 87 years old. For half a century, Davis led a distinguished career as an actor, playwright and director. Along with his wife, Ruby Dee, he was a renowned civil rights activist and an unforgettable figure in the African American struggle for equality. We spend the hour remembering Ossie Davis: From his eulogies to Malcolm X and Martin Luther King to his opposition to the war in Iraq. We hear from actor Danny Glover and journalist Herb Boyd and we play a commentary by death row prisoner, Mumia Abu Jamal. [includes rush transcript]

Actor and civil rights activist, Ossie Davis has died. He was found in a hotel room in Miami Beach Friday, where he was making a movie. He was 87 years old.

For five decades, Ossie Davis had a distinguished career as an actor, playwright and director. Along with his wife, Ruby Dee, he was a renowned civil rights activist and an unforgettable figure in the African American struggle for equality.

He performed in some 80 movies, including six with director Spike Lee. Two months ago, he and Ruby Dee, were honored at the Kennedy Center for their lifelong contributions to theater, television and film, as well as for being models of courage and grace in the long struggle for equality in the United States.

Ossie Davis was born Dec. 18, 1917, in Cogdell, Georgia. His given name was meant to be Raiford Chatman Davis, but the registrar of births recorded what were supposed to be the initials, “R.C.,” as “Ossie” and it remained his name ever since.

He grew up in the segregated south amid racism and the Ku Klux Klan. As a young man, he hitchhiked to Washington, D.C., to attend Howard University. He dropped out at the end of his junior year and moved to Harlem in New York City. In 1942, he was drafted into the Army where he spent much of World War II as a surgical technician in an Army hospital in Liberia.

After his discharge in 1945, he began career on the stage in New York where he met fellow actor, Ruby Dee. They married in December 1948 and were inseparable for the next 56 years.

In addition to their acting careers, Ossie Davis and Ruby Dee had prominent roles on the nation’s political stages. They participated in marches for racial equality throughout the South and participated in the 1963 March on Washington.

After Malcolm X was assassinated at a Harlem rally in 1965, Ossie Davis wrote and delivered a eulogy at his funeral. In 1968, he eulogized the Rev. Dr. Martin Luther King.

Despite being blacklisted briefly in the 1950s McCarthyism era, Davis often traveled to Washington to speak before congressional committees about the arts or about opportunities for people of color in Hollywood.

In 1992, Davis wrote a novel and in 1998 published an autobiography with his wife titled, “With Ossie and Ruby: In This Life Together.” Davis continued his activism up until his death, most recently protesting the war in Iraq.

AMY GOODMAN: We’re going to begin with a speech he gave at Riverside Church days after the launch of the U.S. invasion of Iraq. This is Ossie Davis.

OSSIE DAVIS: I am indeed Ossie Davis. I say that so that those whose duty it is to report my behavior back to the proper authorities. I am not as smart as Miss Condoleezza Rice, though she is yet my sister, nor so faithful unto death as General Colin Powell, though he is yet my brother. They have their sense of duty; I have mine. They are loyal to their commander-in-chief, and I am loyal to mine. My commander-in-chief is Martin Luther King, Jr., and more than 30 years ago, he stood in these sacred halls and gave me my marching orders.

Though I was predisposed to peace-mongering long before I met Dr. King, it started for me with a jolt on that day, August 7, when the atomic bomb was dropped on Hiroshima, and I was with a soldier, 28 years old, faced with the brutal consequences of what my country had done. It was a period that left me in depression, trying to find an answer, because I knew the quandary, into which these acts had led us. I fully understood that our technology and our humanity were in full balance. Which one would lead us to the future was the question.

I watched in horror when I left the service as my country used the atomic bomb as the center of its foreign policy, how the march away from colonization in Africa and other places was affected by that concept of ourselves which under the aegis of Mr. Churchill and also Mr. Truman set out to establish their vision of a world where we had a second class place and were implored to remain in that position. I saw the struggle for people to be free. I saw the stand we took in 1954 when France was faltering as she tried to re-impose colonialism in Southeast Asia, and when France faltered Dien Bien Phu, I saw her step in and take over. I saw, even then, that we were on a course that could well lead to destruction. And much later, in the war that came subsequent to that, I saw the country engaged in what Dr. King told us on that night was adventures based on militarism, racism, and poverty, which it was more constrained to pursue than peace and justice and equanimity all over the world. I became that night as many of you did, citizens who were also drum majors for justice, drum majors for justice second class, glad to be recruited.

I thought with the pain and anguish of Vietnam that my country had learned a lesson, that we had decided that there was an end to our reliance on technological tricks and gimmickry. But I see today that I have been mistaken. As I read once again the magnificent words of Dr. King upon that occasion and saw how easily we might this very night transpose the word Vietnam for Iraq, and the document would still be an eloquent cry for sanity and for peace.

I have never looked upon myself as a magician. I was not sent by the almighty to solve all of the problems of the world at one fell swoop. I am not morally arrogant. I accept the fact that maybe this generation was not the one designed by fate to bring peace to the world. But I also believe that it is necessary to stay on the march, to be on the journey, to work for peace wherever we are at all times, because the liberty we cherish, which we would share with the world, demands eternal vigilance. And democracy is no easy path, but those of us who believe in it must be prepared to sacrifice in its cause more willingly than those who are prepared to die in the wars of aggression. We, too, must be dedicated to the cause of freedom. So, tonight, I’m happy to join once again with those of you who see the cause as I do. I say to my commanding officer, “Martin, here we are. Ossie, Ruby, our children and grandchildren, all our house, all of us joined with millions from one end of creation to the other. Martin, we report for duty, sir.” Thank you.

AMY GOODMAN: Ossie Davis, speaking a week after the invasion of Iraq began. He was speaking on March 27, 2003, at an event sponsored by WBAI Pacifica Radio at the historic Riverside Church.

Danny Glover on Ossie Davis: “He Saw No Separation Between His Social Commitment and His Artistic Commitment”

NEXTDanny Glover on Ossie Davis: “He Saw No Separation Between His Social Commitment and His Artistic Commitment” 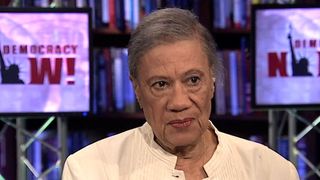