AMY GOODMAN: A new Frontline documentary series called “News War” will begin airing on PBS tomorrow night. Part one of the series examines the political and legal forces challenging the mainstream news media. The second part looks at the legal jeopardy faced by a number of reporters across the country, and interviews reporters facing jail time for refusing to reveal their sources. One of the journalists interviewed is Josh Wolf. Frontline talked to him before he went to jail. In a moment, we’ll be joined by Frontline producer Raney Aronson, but first let’s go to an excerpt from the Frontline series “News War.”

NARRATOR: Thirty years ago, they were thought of as heroes.

CARL BERNSTEIN: It would have been totally impossible to have done the Watergate reporting and identified our sources.

NARRATOR: Today, reporters are under attack.

MICHAEL BARONE: We have a press that is at war with an administration, while our country is at war against merciless enemies.

UNIDENTIFIED: They are seeking subpoenas and going after people in cases where they would never have done it even two years ago.

NARRATOR: Beginning in February, Frontline correspondent Lowell Bergman takes a hard look at the news industry with a series of films that examine the tremendous change taking place in journalism today.

LOWELL BERGMAN: Would you go to jail to protect your sources?

NARRATOR: From the legal challenges to the explosion of new and emerging media, and the economic realities of today’s news business.

TED KOPPEL: We’re judging journalism by the same standards that we apply to entertainment. That may be one of the greatest tragedies in the history of American journalism.

NARRATOR: This is also the story of the ongoing war between the press and the White House.

PRESIDENT GEORGE W. BUSH: It was a shameful act for someone to disclose this very important program in a time of war.

BILL KELLER: It’s the president of the United States saying that if you publish this story, you will have blood on your hands.

NARRATOR: And of political spin.

UNIDENTIFIED: The press was sold and spun and just fooled by the White House in the run-up to the war.

NARRATOR: How did we get here?

UNIDENTIFIED: How can one say that we have a watch-dog press after a performance like that?

NARRATOR: And what is at stake?

UNIDENTIFIED: There is a dire need for institutions that tell the truth, that pursue the truth, and that chase it at all cost.

UNIDENTIFIED: If people engage in activities that subvert their government and thereby help our enemies, what do you call it, treason or simply unpatriotic behavior? It’s a problem. The press in this country ought to be reporting as though our lives depend on it, because, indeed, they do.

AMY GOODMAN: An excerpt from the four-part Frontline series “News War” that will air tomorrow night on PBS around the country. Raney Aronson is the producer, director and writer of parts one and two of the series. Welcome to Democracy Now!

RANEY ARONSON: Thanks for having us.

AMY GOODMAN: In part two, you also interviewed Josh Wolf when — before he went back into prison. Talk about the thesis of “News War,” the subtitle “Secret Spin and the Future of the News.”

RANEY ARONSON: What we tried to do is actually look at the challenges facing the media right now, so we looked at it from the government angles, sort of contentious relationship with the Bush administration, and then we also looked at the legal jeopardy a number of reporters are facing right now.

AMY GOODMAN: Talk about some of those.

RANEY ARONSON: Well, it’s been really interesting. I mean, if you look at the Judy Miller case, bringing the Judy Miller case to the appellate level court in the Plame affair, it really opened the doors, at least on a legal front, for the government to go after other reporters, such as Josh Wolf. So, if you look at the recent rulings, it really points to that decision that sort of affirmed a case from the early '70s. And what we do is really look at this era as harkening back to the early ’70s. In other words, we haven't seen this sort of attack from the government really in about 35 years.

AMY GOODMAN: You also go back to the Pentagon Papers, in giving a kind of background to all of this. Explain the legal issue there.

RANEY ARONSON: Sure. It’s a great issue. The issue that we look at in the second hour is a very big question about who has the right to publish. In other words, is it the government or the press? What the Pentagon Papers said is, essentially, the press has a right to publish. The question that it left open, which is the one we’re looking at today, is what can the government do to the press after they publish? In other words, what is viable in terms of what they can do? And there is the option of the Espionage Act, which was left very much open in the Pentagon Papers. That’s something a lot of people don’t know about.

AMY GOODMAN: You also talk about the James Risen piece and the big article exposing the government spying on U.S. citizens.

AMY GOODMAN: How does that fit into this scheme?

RANEY ARONSON: Well, it’s a really good question. We have James Risen, Eric Lichtblau and Bill Keller all talking to us from The New York Times, who talked to us very openly about a meeting that Bill Keller had with the president of the United States, in which the president asked him, along with General Hayden and others, to hold off on publishing that story. They gave them a number of reasons, and Bill Keller said that the end sort of message he got from the president was that if he published, he would have blood on his hands. Now, we also talked to —

AMY GOODMAN: Blood on his hands?

RANEY ARONSON: Mm-hmm. He goes as far as to say that —

RANEY ARONSON: The country’s blood. In other words, if The New York Times publishes the NSA wiretapping story, which the administration believes has been great in tracking terrorists, then The New York Times will have blood on its hands.

AMY GOODMAN: Now, the Times did hold onto that story for more than a year.

AMY GOODMAN: The president had warned him, Keller, not to publish the story —

AMY GOODMAN: — on the eve of the election in which President Bush was running for re-election.

AMY GOODMAN: So they did hold the story.

RANEY ARONSON: Well, actually, the way that it works in terms of a timeline is, when Bill Keller actually sat down with the president, they were just about to publish. So the holding onto the story happened in the year preceding the meeting with the president. Why they held onto the story, no one will actually talk to us frankly about, so we don’t really know if it was James Risen’s book, or if it was simply because what Bill Keller tells us, is the sources weren’t, you know —

AMY GOODMAN: Well, let’s just clarify. So you’re saying that before the presidential election, the administration told The New York Times not to publish, and they didn’t. Then, a year later, right before Risen is going to publish a book and expose this, even though it hasn’t come out — James Risen — even though it hasn’t come out in The New York Times, that’s when Keller sat down with the president, and then ultimately they decided to publish.

RANEY ARONSON: Exactly. We don’t actually know if Keller had had meetings himself with people in the administration beforehand. He wouldn’t confirm that. So a lot of this is rumor. James Risen wouldn’t talk to us about it, so we actually went to the people who are involved in it. Nobody would tell us real details about it.

AMY GOODMAN: Do you see a distinction between stories that are printed that expose the state versus stories, like Judith Miller, where she is using unconfirmed sources like with weapons of mass destruction, to protect the state?

RANEY ARONSON: Well, we actually spent quite a bit of time in our first film, talking about this cozy relationship the Washington reporters now have with administration officials and how that’s really changed from the '70s, where the idea of a whistleblower is someone that you would give that sort of confidential source relationship with, how it's changed and how that’s a really big problem. We talked to Judy Miller about it on camera. We talked to all sorts of people about this, including Bob Woodward. We really asked them hard questions about what really is going on here? How did you guys get it wrong? What kind of relationship did you have, where you didn’t challenge your own sources enough?

AMY GOODMAN: On the eve of the invasion? 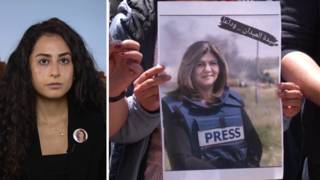