Dick Cheney is heading to Utah today to give a commencement address at one of the most conservative schools in the country — Brigham Young University. More than 3,000 students, professors and alumni at the Mormon school have signed a petition to oppose the selection. We speak with a BYU graduate student. [includes rush transcript]

AMY GOODMAN: We’re going to continue on the issue of student activism now. Vice President Dick Cheney is heading to Utah today to give a commencement address at one of the most conservative schools in the country: Brigham Young University. Up until recently, no political protests had been at the Mormon school in years.

JUAN GONZALEZ: Well, that all changed when the school announced this year’s commencement speaker. 3,000 students, professors, alumni and church members have signed a petition opposing the selection of Cheney and the decision to award him an honorary doctorate. Anti-Cheney protests have also been held. And tonight, student activists are planning to hold an alternative commencement featuring Ralph Nader.

AMY GOODMAN: Joe Vogel joins us on the phone right now. He is a graduate student at BYU. He’s also the author of the book Free Speech 101: The Utah Valley Uproar over Michael Moore.

But let’s talk about Dick Cheney right now. Joe Vogel, what’s happening? How did Dick Cheney end up being the commencement speaker?

JOE VOGEL: Well, we found out about a month ago. And apparently the school had tried to invite President Bush last year, and that invitation didn’t work out. And I guess the White House contacted the school and said that Dick Cheney was available, and the board of trustees at BYU, which is the first presidency of the LDS Church, extended the invitation.

JUAN GONZALEZ: And the degree of student and faculty support at such a conservative university, how did that develop?

JOE VOGEL: Well, it’s certainly been an issue. BYU has been noted as a very conservative institution for a long time, but there has been a significant backlash to this decision from both students and faculty, who really don’t feel that, you know, the religious values that BYU espouses, they don’t feel that Dick Cheney in any way represents those values.

AMY GOODMAN: Can you talk about what happened April 4, the protests there, and then what is planned for tonight?

JOE VOGEL: Well, on April 4, we had the first political protest on BYU campus in 15 years. And it was really, for me, as a student, it was a really inspiring thing to see. There were 300 or 400 students and faculty out there and basically showing that even here in the reddest campus, in the reddest county, in the reddest state, there are still people who are deeply disappointed in the leadership of the vice president and his policies and actions over the last several years. And so, I think it was a pretty powerful demonstration, that even here in Utah Valley that’s the case.

Today, there’s going to be a lot of things going on. There’s a peace sit-in. There are several groups coming down from Salt Lake City. There’s going to be quite a few protests. There’s going to be people calling for his impeachment. And then, I’m part of a group that has organized an alternative commencement ceremony for those students who don’t feel represented by Dick Cheney, who feel disappointed that they have worked hard their whole tenure here at BYU and then the culminating experience is Dick Cheney. So we’ve provided an alternative commencement that will feature three excellent speakers, including Jack Healey, a human rights activist, Ralph Nader, and Pete Ashdown, who ran for Senate here in Utah last year.

JUAN GONZALEZ: Following the April 4 demonstrations on campus, Adam Barlow, a senior at BYU, had a chance to question BYU’s president Cecil Samuelson about how the protesters were treated. Let’s hear what he asked.

ADAM BARLOW: This is a wonderful demonstration of the opportunity the students have to enter in dialogue with the administration. I was going to say, yesterday, the Dick Cheney protest was limited to a small orange square, and then as soon as the clock struck one, very large men in suits started intimidated students and functionally confiscating their signs. I made my own signs, and I was physically intimidated into turning them in, and I wasn’t allowed to carry my sign home through campus. My question is, why, as an institution of higher learning, does the university so severely limit free speech, and what is the school so afraid of?

CECIL SAMUELSON: The school is not afraid of anything, Adam. Thank you for your input. Next question.

Students at Univ. of Maryland Lead “Hungry for Peace” Fast to Protest War

NEXTStudents at Univ. of Maryland Lead “Hungry for Peace” Fast to Protest War 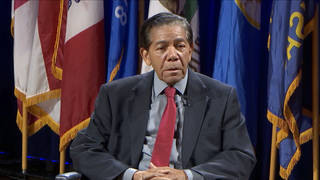