In France, conservative candidate Nicolas Sarkozy has been elected to be the country’s new president. Sarkozy won a clear victory over Socialist rival Segolene Royal with 53 percent of the vote to her 47 percent. The estimated turnout of 84 percent was the highest in France in three decades. [includes rush transcript]

AMY GOODMAN: As we wrap up with the latest news out of France, conservative candidate Nicolas Sarkozy has been elected the country’s new president. He won a clear victory over Socialist rival Segolene Royal with 53 percent of the vote to her 47 percent. The estimated turnout of 84 percent was the highest in France in 30 years.

Sarkozy will officially replace President Jacques Chirac on May 17th to begin his five-year term. In his victory speech, Sarkozy assured Americans of France’s “friendship.” Within hours of the election results being announced, thousands of demonstrators took to the streets in protest. In Paris, police fired tear gas at 300 demonstrators who burned an effigy of Sarkozy while shouting “Sarko-fascist!” Hundreds more took to the streets in other cities across France. Dozens were arrested.

We’re joined now by Doug Ireland in this last few minutes, who lived in France for a decade writing on European politics and culture, a columnist for The Nation magazine, the New York Observer and the Paris daily, Liberation. He joins us on the phone. Welcome to Democracy Now!, Doug. Your assessment of what has taken place in France right now?

DOUG IRELAND: Well, obviously, it’s a very sharp, hard-right turn that has taken place. This is the third consecutive defeat for the left in a presidential election. And Nicolas Sarkozy represents an extremely hard-line authoritarian conception of government on a whole host of social issues, represents Chicago School/Milton Friedman-style ultra-laissez-faire economics on economic issues, and represents the interests of the tycoons and business leaders in France. He’s pledged to significantly downsize the civil service of the French state. He’s going to put through a series of tax breaks for business, abolish the tax on large fortunes, and he’s going to dismantle huge sections of the French national health system, which the U.N. has rated as the best in the world.

At the same time, his victory, which came in large measure because he appealed so successfully to the electorate of Jean-Marie Le Pen, the neofascist leader of the National Front, will continue the hard-line policy on immigrants that Sarkozy implemented during his two terms as interior minister. In fact, he stole the Le Pen slogan, “France: Love It or Leave It,” and has been deporting immigrant families by the tens of thousands.

AMY GOODMAN: Doug Ireland, we’ll have to leave it there, but we’ll certainly continue to follow developments in France with the victory of Sarkozy as president. 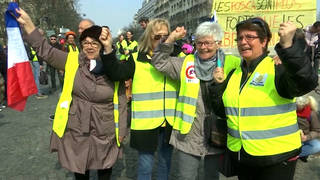