The 11th Hour: Hollywood Documentary Takes on Environmental Crisis of a World on the Brink

“The 11th Hour” is a new feature-length documentary on the extent and gravity of the global environmental crisis and its impact on human life as we know it. The film is produced and narrated by actor Leonardo DiCaprio and includes interviews with Nobel Peace laureate Wangari Maathai, physicist Stephen Hawking, former Soviet President Mikhail Gorbachev and environmentalist Bill McKibben. We play clips from the film and speak to its two co-directors and writers, Nadia Conners and Leila Conners Petersen. [includes rush transcript]

“The 11th hour” is a new feature-length documentary on the extent and gravity of the global environmental crisis and its impact on human life as we know it. It describes this present moment as the very last when change is possible and features suggestions for restorative action from prominent figures around the world.

Nadia Conners and Leila Conners Petersen co-directed and co-wrote this film. They join us now from Los Angeles.

JUAN GONZALEZ: The 11th Hour is a new feature-length documentary on the extent and gravity of the global environmental crisis and its impact on human life as we know it. It describes this present moment as the very last when change is possible and features suggestions for restorative action from prominent figures around the world.

AMY GOODMAN: The 11th Hour opens Friday in New York and Los Angeles. Nadia Conners and Leila Conners Petersen co-directed and co-wrote the film. They join us from Los Angeles. We welcome you both to Democracy Now! Let’s begin —

AMY GOODMAN: It’s great to have you with us. Why did you do this film, Nadia Conners?

NADIA CONNERS: Well, we were looking at the debate out in mainstream media, and we were seeing a lack of response to what was actually happening in reality. And with the troubles increasing in the environment, we felt that what we wanted to do was make a film that encapsulated everything that was going on, plus the solutions at the same time. And we were hoping that we could sort of bring to the forefront that which mainstream media was sort of failing to deal with.

AMY GOODMAN: I wanted to go to the first clip, and it’s the narrator of your film, Leonardo DiCaprio. This is what he has to say in The 11th Hour.

LEONARDO DiCAPRIO: During this critical period of human history, healing the damage of industrial civilization is the task of our generation. Our response depends on the conscious evolution of our species, and this response could very well save this unique blue planet for future generations.

AMY GOODMAN: Leonardo DiCaprio. Can you talk about why, Leila Conners Petersen — and, by the way, Nadia and Leila are sisters — why you chose Leonardo DiCaprio to narrate this film and his involvement in it?

LEILA CONNERS PETERSEN: Sure. We actually co-created this project with Leonardo. So Leonardo — we didn’t choose him so much as we created it with him from the beginning. And we basically, all three, felt, as Nadia said previous, that the debate in this country wasn’t where it should be when all ecosystems are in decline and those ecosystems support our form of life.

And working with someone like Leonardo, we were hoping — and Leo himself said, you know, he hoped that his work, his, you know, work in film and his name recognition would help cut through some of the white noise in the media debate around these issues, because for whatever reason, you know, the earth is our only home, and we’re gambling with the earth’s life support systems in the behaviors that we have in our industrial civilized world. So if that’s the case, why aren’t the stories being told and why aren’t they front-page news every day? And so, that is why, working with him, we hope that the message would come through.

JUAN GONZALEZ: And I’d like to ask Nadia, the Al Gore film, obviously, Inconvenient Truth, has begun to shift dramatically at least some public consciousness about our environment. Do you see your film, obviously, as continuing to move in that path, or do you take a different tack from his film?

NADIA CONNERS: Well, certainly An Inconvenient Truth put global warming on the map in a major way, but I think that, again, the response, whether it’s from people on a societal level or whether it’s from governments and corporations, the knowledge is out there, but the response hasn’t met the scale of the problem.

And I think what we’re thinking about and what we’re looking towards is, we need to get to what is like the next Civil Rights Movement in the United States. It has to be a broad movement, literally. People have to hit the streets on all levels to turn this around. And so, you know, in our loftiest goals, this film could help potentially tip that balance in that direction to get people together to start talking to each other in community, because right now there’s this very isolated sense of people understanding bits and pieces of the problem and then saying, well, what are the ten things that I can do? And while those things are important, that doesn’t — that’s not — what we need to really be doing is getting together in communities and reclaiming our citizenship and really finding a way back to — so, in essence, I think that our hope is that our film can build on what the knowledge of An Inconvenient Truth did, but really inspire you at a core level to have a consciousness shift that will make you really want to get out there and change things.

WANGARI MAATHAI: — part of the world, I keep telling people, “Let us not cut trees irresponsibly. Let us not destroy especially the forested mountains, because if you destroy the forests on these mountains, the rivers will stop flowing, and the rains will become irregular, and the crops will fail, and you will die of hunger and starvation.” Now, the problem is people don’t make those linkages.

AMY GOODMAN: That was Wangari Maathai. Oren Lyons is also featured in the film, the Faith Keeper of the Turtle Clan of Onondaga Nation. This is a clip of Mr. Lyons from The 11th Hour.

OREN LYONS: So that if we choose to eradicate ourselves from this earth, by whatever means, the earth goes nowhere. And in time, it will regenerate, and all the lakes will be pristine. The rivers, the waters, the mountains, everything will be green again. It will be peaceful. There may not be people, but the earth will regenerate. And you know why? Because the earth has all the time in the world. And we don’t. So I think that’s where we’re at right now.

AMY GOODMAN: Also in the film, interestingly, is former CIA director James Woolsey, a man not exactly known in the past for environmental concern, but as one of the chief advocates in the lead-up to the invasion of Iraq. This is a clip of James Woolsey from 11th Hour.

JAMES WOOLSEY: Winston Churchill had it right about us. He said the Americans always do the right thing, but unfortunately it’s only after they’ve exhausted all other possibilities. And we’ve been exhausting some fairly bad possibilities for a long time. I think maybe we’re finally ready to get it right.

AMY GOODMAN: Leila Conners Petersen and Nadia Conners are our guests, co-directors and co-writers of The 11th Hour. Juan?

JUAN GONZALEZ: Leila Conners Petersen, I’d like to ask you about the Woolsey participation, an unusual role for him. How did you learn of his concern about this issue and get him involved in the film?

LEILA CONNERS PETERSEN: Well, basically we were aware of his position on energy, and what we were trying to do with his inclusion is to bridge the environmental idea into places, conservative circles perhaps, people who will only listen to Republicans or people who will not listen or call the environment a liberal issue. You know, really, the environmental issue is a human issue. It’s a uniting issue. It shouldn’t be divisive. Again, you know, the earth is our only home. We all need to protect it now.

Woolsey comes at this issue from a security standpoint, meaning, you know, why is this country depending on foreign oil? We should not depend on it. We should de-link and have — you know, have other sources of fuel: renewable energy. He’s looking into switchgrass, biofuel from switchgrass. So that’s the angle that he is coming into our film with.

You know, and it just so happens that it’s in concert and it works well with the same prescription for climate change, which is get off oil. I think we can all agree at this point, no matter where you fall in the spectrum, that fossil fuels and a civilization based on fossil fuels is not a healthy civilization. We need to move away from those fossil fuels and into renewables and find other sources of energy. And that’s our biggest challenge. We need to find the energy source that will fuel the next thousand years, you know, several thousand years of human civilization, and it can’t be fossil fuels. It causes climate change. It causes a lot of inequity in the world. What’s so interesting about renewable energy, it’s decentralized. You know, solar panels on the roof of a house is very empowering, whether you’re in, you know, Westside Los Angeles, New York City or in Costa Rica, you know, off the grid. So we need to really look at how we fuel energy — fuel our civilization. Woolsey was coming in, you know, from a security standpoint.

AMY GOODMAN: I wanted to turn to another clip from The 11th Hour, Wes Jackson, the sustainable agriculture leader, the founder — and I remember going out to visiting him — in the Land Institute in Kansas.

WES JACKSON: First of all, acknowledge that the planet is seamless. For instance, the fertilizer and the pesticides that are applied in the fields of the upper Midwest go down the Mississippi, and 1,100 miles away there’s a dead zone.

AMY GOODMAN: Nadia Conners, as we wrap up, what are you hoping will happen? The film opens tomorrow, The 11th Hour, around the country. What are your plans in getting it out?

NADIA CONNERS: Well, actually, the film opens tomorrow in New York and Los Angeles, and we are running a simultaneous campaign, an action campaign called 11thhouraction.com. And what we are trying to do is engage people before they see the movie and after they see the movie, because there is a lot of inspiration in this film. I mean, it is a dark time. It is a challenging time. And once you understand the scope of the problem, we’ve also provided enormous amount of solutions. But —

AMY GOODMAN: Nadia Conners, we’re going to have to leave it there. Nadia Conners and Leila Conners Petersen, thanks so much for being with us, co-director and writers of The 11th Hour 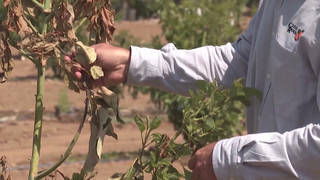