Sunday’s Lincoln Memorial concert ended with legendary folk singer Pete Seeger singing Woody Guthrie’s song “This Land Is Your Land.” He was joined by Bruce Springsteen and Pete’s grandson Tao Rodriguez-Seeger. They sang the song complete with the rarely performed verse “I came to a sign that said 'Private Property,' but on the other side it didn’t say nothing. That side was made for you and me!” [includes rush transcript]

AMY GOODMAN: Bettye LaVette and Jon Bon Jovi singing Sam Cooke’s “Change Is Gonna Come.” This is Democracy Now!, democracynow.org. They were singing in front of the Lincoln Memorial to hundreds of thousands of people for the free pre-inaugural concert that the Obama and Biden families attended, along with celebrities from around the country and the world.


I’m Amy Goodman, and we’re broadcasting from Washington, D.C., just a few blocks from the Capitol, where Barack Obama will take his oath of office today to become the forty-fourth president of United States and the first African American president in US history.


In just a moment, our special guest, Alice Walker, will be joining us for the rest of our live inaugural coverage.


Monday marked Martin Luther King Day. Dr. King would have been eighty years old. On January 15th, 1929, he was born. He was assassinated April 4th, 1968, at the Lorraine Motel in Memphis, Tennessee. Four years before his death, King was interviewed on BBC, and he was asked if he thought it was at all realistic that an African American could become US president within forty years.


[inaudible] just a moment what Dr. Martin Luther King had to say, but first we’re going to the man who will be named — who will be sworn in as president today, Barack Obama. This was some of what he had to say on Saturday.


PRESIDENT-ELECT BARACK OBAMA: Hello, America. I want to thank all the speakers and performers today for reminding us through song and through words just what it is that we love about America. I want to thank all of you for braving the cold and the crowds and traveling, in some cases, thousands of miles to join us here today. Welcome to Washington, and welcome to this celebration of American renewal.

In the course of our history, only a handful of generations have been asked to confront challenges as serious as the ones we face right now. Our nation is at war. Our economy is in crisis. Millions of Americans are losing their jobs and their homes. They’re worried about how they’ll afford college for their kids or pay the stack of bills on their kitchen table. And most of all, they’re anxious and uncertain about the future, about whether this generation of Americans will be able to pass on what’s best about this country to our children and their children.


I won’t pretend that meeting any one of these challenges will be easy. It’ll take more than a month or a year. It will likely take many. Along the way, there will be setbacks and false starts and days that test our resolve as a nation. But despite all this, despite the enormity of the task that lies ahead, I stand here today as hopeful as ever that the United States of America will endure, that it will prevail, that the dream of our founders will live on in our time.

AMY GOODMAN: That was Barack Obama on the steps of the Lincoln Memorial on Sunday before hundreds of thousands of people. The event ended with a rousing round of this “This Land Is Your Land.” Pete Seeger was the special guest. He sang with Bruce Springsteen and Pete Seeger’s grandson, Tao Rodriguez-Seeger.


Now, many people — I’m sure you know “This Land Is Your Land.” But what he managed to do is sing the original song, the rarely performed Woody Guthrie verse : “I came to a sign that said private property, but on the other side it didn’t say nothing. That side was made for you and me.”


PETE SEEGER: [singing with Bruce Springsteen and Tao Rodriguez-Seeger] As I was walking that ribbon of highway
I saw above me that endless skyway
I saw below me that golden valley
This land was made for you and me.

I’ve roamed and rambled and I followed my footsteps
To the sparkling sands of her diamond deserts
And all around me a voice was sounding
This land was made for you and me.

In the squares of the city, under shadow of the steeple
At the relief office, I saw my people
As they stood there hungry, I stood there whistling
This land was made for you and me.

A great high wall there tried to stop me
A great big sign there said private property
But on the other side it didn’t say nothing
That side was made for you and me. 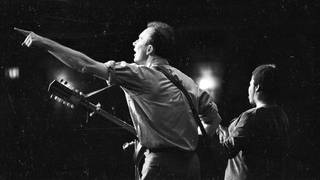