Colombia and Venezuela are expected to reestablish trade and diplomatic ties after their leaders meet today to defuse a simmering crisis. Colombia’s new president Juan Manuel Santos, who was inaugurated Saturday, will meet Venezuelan President Hugo Chávez in Santa Marta, Colombia, the site where South American liberation hero Simón Bolivar died in 1830. In his inaugural address, Santos, who was defense minister under former President Álvaro Uribe, called for “frank and direct” dialogue with Chávez. Venezuelan President Hugo Chávez responded by calling for Colombian guerrillas to free all their hostages and give up their armed conflict. [includes rush transcript]

AMY GOODMAN: Colombia and Venezuela are expected to reestablish trade and diplomatic ties after their leaders meet today to defuse a simmering crisis. Colombia’s new president, Juan Manuel Santos, who was inaugurated Saturday, will meet with the Venezuelan president, Hugo Chávez, in Santa Marta, Colombia, the site where South American liberation hero Simón Bolivar died in 1830.


In his inaugural address, Santos, who was defense minister under former president Álvaro Uribe, called for “frank and direct” dialogue with Chávez .


PRESIDENT JUAN MANUEL SANTOS: [translated] The word “war” is not in my vocabulary, when I think of Colombia’s relations with its neighbors or any other country on the planet. It’s easy to say that he who says he wants war has not had the responsibility of sending soldiers to a real war. I’ve had that responsibility. I have sent soldiers, seamen and police officers to fight terrorism. I have consoled their widows and orphans, and I know how painful it is.

AMY GOODMAN: Venezuelan President Hugo Chávez responded by calling for Colombian guerrillas to free all their hostages and give up their armed conflict. Last month, Chávez cut all ties with Colombia over accusations from the former Colombian government of Álvaro Uribe that some 1,500 guerrillas were operating in Venezuela.


To talk more about this, I’m joined here in New York by Latin American historian Greg Grandin, professor of history at New York University, author of Empire’s Workshop: Latin America, the United States, and the Rise of the New Imperialism. His most recent book, Fordlandia, was a finalist for the Pulitzer Prize in history.


Welcome to Demcracy Now!, and congratulations on being a finalist.


GREG GRANDIN: Yeah, well, I think that he’s caught between a rock and a hard place between pressures from within Colombia that have mitigated against establishing good relations with Venezuela. I mean, if we step back and we look at the beginning of this conflict back in 2007, 2008, Chávez actually had good relationships with Uribe. He had offered to mediate, and he was mediating the release of hostages held by the FARC. There was incredible pressure placed on Uribe within Colombia by the military, by the oligarchy, and by the United States, not to allow that to go forward, not to kind of showcase Venezuela’s role as a mediator. And he broke relationships with Venezuela, and Venezuela was kind of left hanging out there. And that’s where all the accusations came from, over exaggerated intelligence reports or falsified intelligence reports about Venezuela’s relationship with the FARC, and relations deteriorated. And these are both pragmatic men, Santos and Chávez, in their own way, and I think that they have a lot invested in trying to reestablish good relations. We’ll see how long it lasts.


AMY GOODMAN: What would you say is the legacy of Uribe, and if you do hold out hope for Santos?


GREG GRANDIN: Well, that’s the question. Uribe’s legacy is basically four things. One is massive civilian deaths — 14,000, 15,000 civilians killed during the war, thousands killed under this false positive in which — practice, in which the military would dress up civilians as guerrillas in order to raise the body count in terms of how many guerrillas were killed. They just found a mass grave of 2,000. There’s massive internal displacement. Colombia has the highest internally displaced population in the world, over two million. It’s an enormous tragedy. But more important, more structurally, is, Uribe presided over what could be understood as the kind of normalization of paramilitary politics, in which paramilitaries weren’t so much vanquished as they went legit. They took over local municipal governments. They moved into particularly biofuel production. There’s been a massive land grab under Uribe. Ten million acres of land, half of the arable land in Colombia, is now seized paramilitary land. That’s not going to change.


This is the kind of legacy that Uribe has left to Santos. And Santos, the question is if he’s going to continue it or if he’s going to try to change it. The big challenge for Santos is that the Uribe model is unraveling. People hold up Uribe as a model, or the Plan Colombia as a model, of success, for having brought down the FARC, having brought down violence in key urban cities, like Bogatá and Medellín. Over the last year, year and a half, that’s been unraveling. There’s more FARC activity. Crime in Medellín has gotten — homicide rate in Medellín has skyrocketed. And the hope that — or the attempt to normalize paramilitary politics by bringing them into government on the local level, that’s also unraveling. There’s factions within paramilitaries. They work with what’s called “mini-paramilitaries” that are spinning off, that are now fighting with each other over spoils. And Santos, this is the kind of mess that Santos has inherited, when, outside, politically, it has a reputation as being a success, but internally, there’s a lot of strains.


AMY GOODMAN: Can you talk about the Colombian-Israeli relationship? This is very interesting, because now, well, the former president, Uribe, is one of those heading up the UN investigation of the Israeli commando attack on the Gaza aid flotilla.


GREG GRANDIN: Yeah, there’s a kind of beautiful symmetry to this. I mean, one wouldn’t imagine somebody from the Likud being put on some truth commission in Colombia. There is this kind of structural similarity between Colombia and Israel in terms of US foreign policy, where the US is — the relationship with both countries. And in regions that are increasingly antagonistic or antagonistic, the US is recently banking its authority on a highly militarized power that basically makes endless war — Israel in the Middle East, Colombia in the Andes. The US encourages a kind of reckless preemptive doctrine that excuses all sorts of military action in Colombia. There was the raid into Ecuador. Recently it’s been its accusations against Venezuela, the US alone in the Americas has supported and encouraged. I think, if you step back and you look at Israel’s role in Colombia over the last couple of years, it’s been a large supplier of aid, large supplier of military technology. This is nothing new. Israel in Central America in the 1980s, particularly in Guatemala, was a large — was an important supplier, stepping in when Carter, when Jimmy Carter cut off aid to Guatemala, for instance. Israel stepped in and set up an assault weapons factory in Guatemala, supplied intelligence technology and training to Guatemala. It’s a long history of Israel supporting some of the worst elements in Latin America.


AMY GOODMAN: Greg Grandin, thanks so much for being with us, author of Empire’s Workshop and Fordlandia. 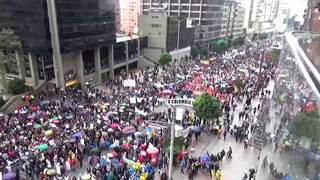