“Pulling Accounts From the Unaccountable.” By Amy Goodman Less than a month after Occupy Wall Street began, a group was gathered in New York’s historical Washington Square Park, in the heart of Greenwich Village. This was a moment of critical growth for the movement, with increasing participation from the thousands of students attending the cluster of colleges and universities there. A decision was made to march on local branches of the too-big-to-fail banks, so participants could close their accounts, and others could hold “teach-ins” to discuss the problems created by these unaccountable institutions.

Heather Carpenter, according to the federal lawsuit filed this week in New York, is studying to be a certified nursing assistant, working to pay for school as a counselor for mentally disabled people at a group home on Long Island. Her fiance, Julio Jose Jimenez-Artunduaga, is a Colombian immigrant, pursuing the American Dream, working part time as a bartender. They marched from Washington Square Park to a nearby Citibank branch, where she went to the teller to close her account, explaining her frustration with the bank’s new monthly $17 fee for accounts with balances below $6,000.

As described in the lawsuit, the teach-in began with participants “announcing the amount of their debt, discussing their student loan experience, and reciting sobering statistics related to the debt of college graduates.” The bank staff called the police, and Julio went outside to avoid any conflict. Heather closed her account and left as well. By that time, a large group of NYPD officers, including Chief of Department Joseph J. Esposito, as well as several plainclothes officers showed up. The police stormed into the bank, locked the doors and began arresting those involved with the teach-in.

Even though Heather was outside, a plainclothes officer identified her as a protester and told her to get back in the bank. She said she was a customer and showed her receipt. To her shock, as documented by video, Heather was grabbed from behind by a plainclothes officer who began forcing her into the bank. She screamed, but within seconds disappeared into the vestibule, surrounded by a dozen cops, where she was roughly handcuffed and arrested. Julio was roughed up and arrested as well—all for closing an account at Citibank.

They spent over 30 hours in police custody and were charged with resisting arrest and criminal trespass. A month later, the New York District Attorney’s office indicated it would drop the charges at their court appearances. Heather and Julio still want to see Chief Esposito and the other arresting officers in court, though, for an explanation of the officers’ excessive force and unlawful arrest of the two.

Just weeks after their arrest, on Nov. 5, thousands around the U.S. participated in Bank Transfer Day. Kristen Christian was upset with the announcement that Bank of America was going to charge a monthly $5 debit card fee. She created a Facebook event and shared it with her friends. Before long, Bank Transfer Day had 85,000 online supporters.

She reported that 40,000 new accounts were created at nonprofit credit unions across the country that day. She said that the $5 fee, which Bank of America has since scrapped, “illustrates how out of touch the executives of the large banks can be … with Bank of America, the fee only applied to account holders with less than $20,000 in combined accounts. I couldn’t support a business that would directly target the impoverished and working class.”

Just after the financial crash in late 2008, activists in Oregon started looking into the creation of a state bank, modeled after the only state-owned bank in the United States, in North Dakota. The cities of Portland and Seattle are now looking into shifting their massive municipal accounts away from the Wall Street banks. According to one report, Bank of America may lose upward of $185 billion from customers closing accounts.

In January 2010, the Move Your Money Project formed, encouraging individuals to shift their funds to local and non-profit credit unions, to defund the Wall Street megabanks. Its organizers released a video based on the classic 1946 film of bank malfeasance, “It’s a Wonderful Life,” in which protagonist George Bailey fights to protect consumers from the greedy bank president, Mr. Potter. As Bailey exhorted in the film, “This town needs this measly one-horse institution, if only to have some place for people to come without crawling to Potter.” The Move Your Money video ends with this message: “If you leave your money with the big banks, they will use it to pay lobbyists to keep Congress from fixing the system … don’t just watch ‘It’s a Wonderful Life’ … move your money.” 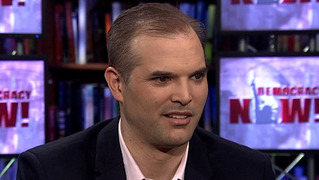 Who Goes to Jail? Matt Taibbi on American Injustice Gap from Wall Street to Main Street