NATO has admitted for the first time Libyan civilians were killed and injured during its seven-month bombing campaign that led to the ouster and death of Libyan leader Muammar Gaddafi. The acknowledgment came after a New York Times investigation revealed at least 40 civilians, and perhaps more than 70, were killed by NATO air strikes, including at least 29 women or children. Others were killed when NATO warplanes bombed ambulance crews and civilians who were attempting to aid the wounded injured in earlier strikes. We speak to New York Times senior reporter Eric Schmitt, who co-wrote the investigation with C.J. Chivers. “We only saw a small sampling of the strike sites that may have been affected, so the death toll is probably much larger,” Chivers says. [includes rush transcript]

JUAN GONZALEZ: NATO is admitting for the first time Libyan civilians were killed and injured during its seven-month bombing campaign that led to the ouster and death of Libyan leader Muammar Gaddafi. NATO made the acknowledgment after a New York Times investigation revealed at least 40 civilians, and perhaps more than 70, were killed by the bombing raids. The New York Times reports the victims include at least 29 women or children, who often had been asleep in homes when the ordnance hit. Others were killed when NATO warplanes bombed ambulance crews and civilians who were attempting to aid the wounded from earlier strikes.

ALI HAMID GAFEZ: [translated] In the darkness of night, they bombed me and my family.

C.J. CHIVERS: Late on August 8th, a bomb struck the house of Ali Hamid Gafez, collapsing the second floor and killing five women and seven children. A few minutes later, a nearby compound belonging to Altiya al-Jarud was hit. Two buildings inside were destroyed, killing four men. The survivors said that his neighbors rushed to help dig through the ruins of the second compound. NATO attacked once more. Eighteen more people died.

AMY GOODMAN: Despite NATO’s acknowledgment of civilian deaths, the alliance is saying it does not have the capacity or intention of investigating the deadly strikes on civilians. Unlike in Afghanistan, NATO has not expressed condolences or given small payments to victims or their families.

Eric, welcome to Democracy Now! Why don’t we start off—before we talk about the latest news that’s now coming out around NATO in Pakistan that you’re going to a news conference over, let’s talk about what you found in Libya.

ERIC SCHMITT: Well, the principal findings, as your introduction has suggested, was that initially NATO had said, and the Secretary General of NATO had said, that throughout the seven-month air campaign, they knew of no confirmed civilian casualties on the ground as a result of NATO air strikes. What our investigation has shown, and my colleague’s reporting has shown, that there were at least a dozen or so instances where there were air strikes that caused civilian casualties. Now, granted, this is a very—a relatively small number in the overall number, as you said, 9,700 strike sorties that were carried out, but still significant enough that there were somewhere between 40 and 70 civilian deaths. And that’s just what we know of. Of course, we only saw a small sampling of the strike sites that may have been affected, so the death toll is probably much larger.

JUAN GONZALEZ: And in terms of what you did find, you found several instances where families were hit in their homes, as well. Could you talk about one or two of those?

ERIC SCHMITT: Yeah, what we saw, a couple of instances. One was, for instance, there was a strike against a warehouse that we later learned from the guards who had been tending it through the many months was really only a warehouse for food. This was quite close to a civilian home where a number of people were killed. There were, in other instances where mistaken intelligence—where there was a civilian home hit that was very near another home that had been the meeting place for some of the pro-Gaddafi forces. So, again, a piece of bad intelligence, just a few doors away, essentially, ended up meaning a death warrant for many—for several family members.

AMY GOODMAN: Can you introduce us to some of the family members that C.J. Chivers, your co-author in this piece, visited? The story of the little boy who was killed, for example?

ERIC SCHMITT: Yeah, we talk about this little boy who was killed in a strike early on, and it was very sad in terms of how—again, the targeting process here, which would be carried out initially in Italy and then relayed to these pilots, who would be flying these wartime missions, usually at night, using laser-guided or satellite-guided bombs for the precision. And yet, what happens is, in this particular case, bombs are falling, and buildings are collapsing around families, killing small women and—small children and women, in many cases.

JUAN GONZALEZ: Yeah, I want to go back to a New York Times video report narrated by C.J. Chivers. This clip begins with Anders Fogh Rasmussen, Secretary General of NATO, speaking in June.

C.J. CHIVERS: NATO has withheld details on most of the errors and labored to portray its role in the war as all but flawless. Until this month, it insisted it had not confirmed the killing or wounding of a single civilian.

JUAN GONZALEZ: Your response to the initial NATO declarations?

ERIC SCHMITT: Well, here’s the problem with the Secretary General’s statement, and it was a statement that was repeated over and over again by NATO officials throughout the campaign: “We have no information of confirmed casualties.” Well, the problem is that NATO and the U.S. did not have any boots on the ground, at least none that they’ve acknowledged, and so until they had such boots on the ground that they could conduct their own investigation, they were not going to acknowledge any kind of error, even though, of course, there were times, air strikes, where the pro-Gaddafi regime came out and claimed casualties for strikes. These were dismissed as propaganda. And in one case, we went back and looked at these, where, in one instance, there was—I think the regime at the time of the strike had claimed maybe 80 or 90 civilian casualties. That clearly proved to be exaggerated, but our examination—again, on Chris’s reporting on the ground, in talking to family members, neighbors, medical people in the area—confirmed that there were probably about 30 or 35 casualties or so that were—that died on the scene. So, clearly, and this is—NATO officials pretty much acknowledged to us that, again, without having gone on the ground and confirming it themselves, there may well have been civilian casualties.

The question now is, what will be done about it? NATO has not committed to going in on the ground to investigate these strikes, as they’ve done in places, as you noted, in Afghanistan. They’re essentially waiting for the Libyan government to invite them in to do this. So far, the Libyans are preoccupied with setting up their new government and dealing with other challenges, apparently, to do this.

AMY GOODMAN: And ties to the current Libyan leadership of NATO?

ERIC SCHMITT: Well, again, NATO and the Libyan government are in contact. And as a result of our story, I was told just yesterday by the NATO spokesman, for instance, that they are now working to gather information on unexploded ordnance. These are essentially duds, bombs that were dropped but didn’t go off, that pose a real threat to civilians, including children. NATO is now trying to track those—because the pilots knew when their bombs didn’t explode—track them, figure out where they are, and get that information to the Libyan government so they can get it out to their people. I’m told that NATO will try and get that information to the Libyan government by the end of January. 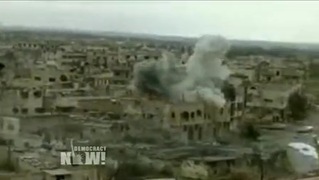