Environmental groups in Durban have staged a series of actions in recent days calling on world leaders to agree to a just climate change deal. Democracy Now! got an inside look at one action staged by Greenpeace to hang a banner off of a Durban hotel where a meeting of the World Business Council for Sustainable Development was taking place, bringing together representatives from a number of large corporations and delegates to the U.N. Climate Change Conference. The banner read: “Listen to the people, not the polluters.” “Our goal here today was to highlight how governments are being unduly influenced by a handful of evil corporations who are trying to adversely influence the climate negotiations that are happening here in Durban,” says Michael Baillie with Greenpeace Africa. “They are holding the climate hostage.” [includes rush transcript]

AMY GOODMAN: Here in Durban, South Africa, a number of environmental groups have staged a series of actions in recent days calling on world leaders to agree to a just climate deal. Early this morning, Democracy Now! got word of an action by Greenpeace International, and we got an inside look behind the protest.

AMY GOODMAN: We’re walking along the beach in Durban, South Africa. Kumi Naidoo, the head of—the executive director of Greenpeace International, and Bobby Peek of groundWork are walking toward a protest. It’s not clear what will happen. It’s about 7:30 in the morning. We already see the signs outside the hotel.

Kumi, can we ask you why you are out here right now?

KUMI NAIDOO: We’re here to say to the negotiators that they should listen to the people, not the polluters. We believe that big polluting corporations have polluted these climate negotiations for several years now. And this is Bobby Peek from groundWork, with Friends of the Earth.

AMY GOODMAN: The World Business Council for Sustainable Development is meeting inside, representing major corporations that are being protested outside. It’s extremely windy day. We are seeing two climbers attempt to bring this banner over the roof of the hotel.

KUMI NAIDOO: We are also up there, have some of our activists who managed to get in in the early hours of the morning, and we hope that they will be able to execute a drop of a massive banner with a message that hopefully will stay there for the entire day of the conference, so that the message will be clear, not just now, but for the entire day.

AMY GOODMAN: We’re here inside the hotel, where people are protesting outside. Inside, the World Business Council for Sustainable Development is taking place. It looks like the banner hang, at least at this moment, has not taken place. Inside the hotel, we saw police go in with climbing equipment. We’ve managed to get inside the hotel, and now we’re going upstairs to try to get to the roof to see what’s happening with the banner hang. We’ve made it to the roof. We’ve climbed onto the roof. Right now the people who are trying to hang the banner, “Listen to the people,” are being arrested. They attempted to hang the banner. They have T-shirts that say “Greenpeace.” You can see all their banner hang equipment.

MICHAEL BAILLIE: My name is Mike, from Greenpeace Africa. Our goal here today was to highlight how governments are being unduly influenced by a handful of evil corporations who are trying to adversely influence the climate negotiations that are happening here in Durban. They are holding the climate hostage.

AMY GOODMAN: Excuse me, ma’am. Can you tell me your name and why you’re up here?

STINA: My name is Stina. I’m from Denmark. And I was here to throw a banner trying to get the politicians’ attention.

AMY GOODMAN: What did the banner say?

STINA: It said, “Listen to the people, not polluters.”

AMY GOODMAN: So, you were risking your life on this very windy day on top of a hotel in Durban, South Africa. Why?

STINA: Because the politicians are not listening to the people.

AMY GOODMAN: Why is that so important?

POLICE OFFICER: Will you please come with us? Thank you.

AMY GOODMAN: The police are now taking them down, as well as all of their climbing equipment. We can actually see the U.N. Conference on Climate Change from here. We’re at the Protea Hotel on the rooftop, because Greenpeace activists attempted a banner hang that said, “Listen to the people, not the polluters.” We’re on—I think we have to go down, the police are telling us.

Hi. I was wondering if you would mind if I ask you a question about what the World Business Council does and where you’re from.

SÖREN BUTTKEREIT: And what are you—

SÖREN BUTTKEREIT: —going to use this for?

AMY GOODMAN: Your thoughts about the protest downstairs and the banner hang that they attempted to do upstairs that said, “Listen to the people, not the polluters”? And how do you feel civil society has a voice? Their complaint is that corporations like Siemens have more of a voice than they do.

SÖREN BUTTKEREIT: I think they underestimate their own influence there, because things going on, like here, they get noticed, and there’s media like you who notice it. And for many companies, that is highly relevant. So I would assume that there is nobody in the business community that doesn’t take this seriously and thinks, you know, what does it mean? We believe that, actually, the discussion would be very different if more people would think about the climate change dilemma as an opportunity. So what are the kinds of solutions and businesses—business opportunities that you can have that arise from changing the—from not having changed the climate, but changed climate change?

KUMI NAIDOO: Friends, colleagues, brothers and sisters, I think by now you know that the activists that were trying to hang the banner have been arrested. They were peaceful in their actions. And we will do everything in our power to try to get them released as soon as possible. Now I have the pleasure of introducing Desmond D’sa. 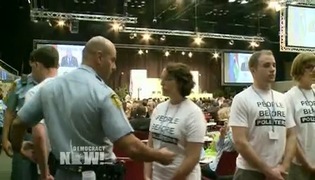