Martin Khor is the executive director of the South Centre, a research center of 51 developing countries. At the United Nations Climate Change Conference in Durban, we caught up with Khor to discuss the negotiations over a new Green Climate Fund to help the developing world tackle climate change, the U.S. role in the summit, and why the U.S.-led focus on China’s emissions obscures the reality that the U.S. emits far more greenhouse gas per capita. [includes rush transcript]

AMY GOODMAN: I wanted to go to Martin Khor of Malaysia. Just before the broadcast, I spoke to him in the halls of the climate change summit that is taking place here. Martin Khor is the executive director of the South Centre, a research center of 51 developing countries. I asked him for his analysis of where the climate talks stand.

MARTIN KHOR: We’re on the last day, and there are still so many issues that are unresolved. The first is whether we will really get the KP second commitment period in its full form, and not a diluted form.

AMY GOODMAN: What does that mean, full form?

MARTIN KHOR: They want a new fund that is independent, especially of the World Bank or the Global Environment Facility.

MARTIN KHOR: I think many countries have had rather critical experiences, negative experiences, in dealing with the bank or with the GEF. It’s cumbersome, it is not equitable, and so on. And that is why they have called for a new fund. The whole rationale of a new fund is that it is independent. And you cannot be independent if the secretariat belongs to someone else which is in a way a competitor. And that’s the World Bank and the GEF.

AMY GOODMAN: What is your assessment of the U.S. role here at the climate change conference?

MARTIN KHOR: Well, I think this is the big elephant in the room, because the U.S., which is, you know, the—historically, the biggest emitter, does not seem to be able to take on commitments that it should. There was so much hope when Obama came in. I remember the first plenary in which the U.S. delegation stood up and said, “This is the new United States. We have arrived again, and we’re going to take the lead.” And there was so much hope. But the targets they have put in, the role which they have played, the pledge system that they have given for all countries, including developed countries, compared to the legally—you know, the legally binding system that was mandated, has actually set back the agenda that was put forward in Bali. And I think it’s happening again here.

So, we understand maybe the administration has its own problems. You know, we know the situation in the U.S. is very complex, with the Congress, the administration, and so many climate denialists, deniers, that are in important positions. But it should not hold back the other countries from doing what they should be doing, you know?

AMY GOODMAN: Looks like the conference is going to be extended until tomorrow. What about the role of China? And what do you want to see come out of this? Or do you think this is what many are calling yet another failed COP?

MARTIN KHOR: Well, we don’t know. I didn’t know it was being extended. I think China, at least on the ground, on the ground, where it really counts, you know, in terms of actions, China is setting a very good example for other developing countries, and perhaps even for the developed countries. They have their institutions in place. They have put climate action into the premier economic institution, the NDRC. They have tried to get the provinces and the municipalities involved. They have set themselves modest, but, for a developing country, high, targets. They are trying to implement it in terms of laws and measures and so on. Is it enough? Probably not. Nobody is doing enough. But they have—

AMY GOODMAN: They have become the largest emitter, though.

MARTIN KHOR: Yeah, but that’s because they have a very high population. You know, the emissions per capita at five to six tons per capita is something like number 80 in the world. They are by no means—

MARTIN KHOR: Eighty, eight-zero. They are 80th biggest polluter in the world in terms of per capita, which is what really counts. The United States is above 20 tons per capita. And there are many other developing countries—and of course all developed countries—that are above China. So it is not fair to look at absolute emissions, because in absolute emission terms, of course China and India are high, but, for example, in the case of India, their per capita emissions is between one and two tons, which is like 120—rank 120 in the world. So, the sin of India and China, if you want to call it a sin, is that they have high populations, which we can hardly blame them for, because there is an accident of history that they have high populations and they were not divided up by colonial masters, as in the case of other countries that were divided up.

MARTIN KHOR: Well, I think, in my region, in Asia, in East Asia, the last two years has seen devastating floods, in Thailand this year and in Pakistan for the last two years. And there are, of course, also floods in Malaysia. And these extreme weather events have been exacerbated by climate change. You know, we don’t have clear scientific evidence that it’s caused by climate change, but we think certainly that it has been made worse by climate change. And extensive floods have become the most damaging aspect of climate change in this short term. We know that we will have sea-level rise, we will have drought and other things. In Africa, drought, I think, is very serious. So, climate change is really happening now, and it is affecting not only the lives of people, it is affecting jobs. In Thailand, most of the industrial factories had to close down. Many of them are still closed.

AMY GOODMAN: Because of flooding.

MARTIN KHOR: Because of flooding. And I think one-quarter of the rice crop has been affected. Of course, this has repercussions for the global economy, as well, because this has disrupted the supply chain for computers, for motor cars, outside of Thailand, and it has affected the supply of rice for the rest of the world. So it is a very serious phenomenon already taking place with dramatic effects on jobs and the economy.

AMY GOODMAN: Malaysian analyst Martin Khor, executive director of the South Centre, a research center of 51 developing countries, speaking to us in the halls of the COP 17, the U.N. Conference on Climate Change here in Durban, South Africa. When we come back, we’ll hear a major protest that’s taking place right now in the plenary and around the conference center. We’ll also hear an exclusive interview with George Papandreou, the former prime minister of Greece. He’s here in Durban, South Africa. Stay with us. 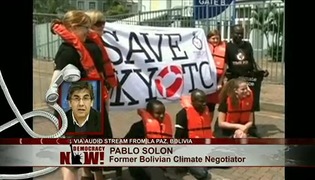