Zelaya’s Son Héctor: The Honduran Resistance Helped Pave the Way for Our Return

We speak with Héctor Zelaya, son of former Honduran President Manuel Zelaya, as he accompanies his father home after the military coup d’état that led to his ouster on June 28, 2009. “I [cannot] think of any president that went into exile and defeated the exile in the first two years. I’m grateful for our people and all the resistance in my country,” Héctor Zelaya says. “Because of their fight against the coup and getting their rights and fighting for their rights, we have our president back in his country and back in his house.” [includes rush transcript]

AMY GOODMAN: President Zelaya has landed in Honduras with his family. He is just about to step out of the plane. We saw thousands of people on the outskirts of the airport waving flags. We also saw riot police. Now, a small gaggle of press is going to document his arrival.

When President Zelaya walks off the plane, he kneels down and kisses the ground. After greeting family and friends, many of whom he hadn’t seen for years, his motorcade slowly made its way through massive crowds to the rally to thank his supporters. It was held at the memorial to the young man killed by Honduran security when Zelaya had attempted to land in Honduras a week after the coup. President Zelaya addressed the crowd. Zelaya then went to the presidential palace and had a ceremonial banquet with the delegation that accompanied him on the flight, as well as the current Honduran president, Porfirio Lobo, and OAS Secretary General Insulza. President Zelaya then went home for the first time in 23 months. Friends and family gathered throughout the house, including his bedroom, singing songs and greeting each other. I spoke with his son Héctor Zelaya Castro.

AMY GOODMAN: What does this day mean to you?

HÉCTOR ZELAYA CASTRO: I don’t think of any president that went to exile and defeated the exile in the first two years, and that I’m grateful for our people and all the resistance in my country. Because of their fight against the coup and getting their rights and fighting for their rights, we have our president back in his country and back in his house. And today he’s going to sleep for the first time in his bed since two years ago.

AMY GOODMAN: You were coming here almost two years ago on the night of June 28th, 2009. Talk about what happened.

HÉCTOR ZELAYA CASTRO: You know, that day, since 5:45 a.m. until 3:00 in the afternoon, I was maybe in automatic mode. You know, I was just doing what the logical thing gave me to do. And until — around 10:00 in the morning, I remember, I just received another call saying that my dad was flying to Costa Rica and to tell all my family that everything was OK and that they didn’t harm him at all, and he was flown down to Costa Rica. So then, there was a coup d’état. It was the first time I heard that word in my whole life. I’m just 29 years old. And, well, the first thing with my brothers and my sister, we thought, let’s go to one of the embassies and take refuge, because this is persecution. They’re going to try — and so, I started receiving all those calls and messages threatening my life, and not to go to the streets, and “We’re looking for you,” and these kind of things. So, everybody, strategically, we went to different embassies. 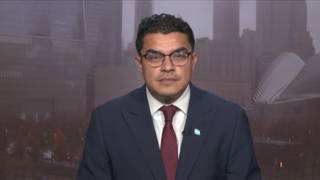