In Libya, rebel forces say Col. Muammar Gaddafi’s stronghold of Bani Walid is ready to come under the National Transitional Council’s authority, despite pockets of resistance. Meanwhile, rebel troops say they have advanced about five miles towards Gaddafi’s hometown of Sirte in heavy fighting today. Reuters reports the U.S. government has urged Niger to detain senior officials from the Gaddafi government who it believes crossed into the country in a convoy from Libya. Niger officials say the convoy carried several senior members of Gaddafi’s government, but gave no indication that Gaddafi himself was among them. We go to Tripoli for an update from Peter Bouckaert, the emergencies director at Human Rights Watch, who has recently discovered that Gaddafi’s warehouses, which were formerly full of assault rifles and anti-aircraft missiles, have been looted. “We have been warning the U.S. and other Western countries that these weapons are floating around all over the country,” Bouckaert says. “Every time a city falls, they end up being looted… Every facility we go to where there were surface-to-air missiles, they’re gone.” [includes rush transcript]

Reuters reports the U.S. government has urged Niger to detain senior officials from the Gaddafi government who it believes crossed into the country in a convoy from Libya. Niger officials say the convoy carried several senior members of Gaddafi’s government, but gave no indication that Gaddafi himself was among them.

Meanwhile, Human Rights Watch has uncovered hundreds of letters in the Libyan foreign ministry proving that Gaddafi’s government directly aided the extraordinary rendition program carried out by the CIA and MI6 in Britain after the 9/11 attacks.

Peter Bouckaert is the emergencies director at Human Rights Watch.

PETER BOUCKAERT: Among the files we discovered yesterday at Musa Kusa’s office is a fax from the CIA dated May 2004 in which the CIA informs the Libyan government that they are in a position to capture and render Belhaj, who’s now the head of the Tripoli Military Council to Libya. And that operation actually took place. He was captured by the CIA in Asia and put on a secret flight back to Libya, where he was interrogated and tortured by the Libyan security services.

NERMEEN SHAIKH: The documents expose how the CIA rendered suspects to Libyan authorities, knowing they would be tortured. One of the most prominent suspects rendered to Libya was an Islamic militant named Abdelhakim Belhaj, who is now the military commander for the Libyan rebels. At the time of his capture in 2004, Belhaj was a member of the Libyan Islamic Fighting Group, a group that had ties to al-Qaeda.

PETER BOUCKAERT: Our concern is that when these people were handed over to the Libyan security, they were tortured, and the CIA knew what would happen when they sent people like Abdulhakim into the hands of the Libyan security services. We must remember that these are Islamic militants who were first in the hands of the CIA. So if they wanted to interrogate them themselves, they could have done so. But instead, they sent them to a security service which, even in the U.S. State Department’s own public reporting, is known for its torture and abuse.

AMY GOODMAN: Peter Bouckaert of Human Rights Watch says the letters from the CIA and MI6 were found in the offices of the former head of Libyan intelligence, Musa Kusa.

PETER BOUCKAERT: What’s remarkable is, first of all, the frankness of these files, they sent questions to the Libyan security services to ask to the suspects they have rendered, but also the very friendly tone. They thank Musa Kusa for the crate of oranges and dates that he sent back with the intelligence agent who came to visit. And all of the—these are letters, “Dear Musa” letters, to a man who is infamous in Libya for his involvement in repression. Musa Kusa was Gaddafi’s enforcer, together with Senussi, the intelligence chief.

AMY GOODMAN: To find out more about these letters, we’re going directly to Peter Bouckaert in Tripoli on the telephone, Human Rights Watch’s emergencies director. But first, before we go to these remarkable letters that were found, Peter Bouckaert, just if you could talk about the latest in Tripoli right now.

PETER BOUCKAERT: Well, the situation in Tripoli is still in the process of stabilizing. When Tripoli fell to the rebels, there was no water and electricity, and the fuel situation was very difficult. But we see daily improvement, and it’s quite clear that the rebels have been preparing carefully for the restoration of the services in Tripoli and also for improvements in the security. There still are significant problems with the treatment of African migrant workers, many of whom are being detained on the street, but we do see some [inaudible], that they are trying to address this situation and end these widespread attacks against African migrants.

AMY GOODMAN: If you could also talk about the latest you hear, though it’s not in Tripoli, the news of leaders within Libya’s rebel movement believing that Muammar Gaddafi has fled the encircled town of Bani Walid in a southbound military convoy to Niger and Chad. What do you understand is happening right now?

PETER BOUCKAERT: Well, there are intense negotiations taking place, led by Moussa Ibrahim, the former spokesperson of government, who is in Bani Walid. We have no indication that those directly involve Muammar Gaddafi, but they certainly involve a lot of his inner circle. According to the information we have, some senior officials fled to Niger in the last few days, but we have no indication that Muammar Gaddafi himself was in that convoy. And we hope that if he does flee the country, he will be promptly arrested and handed over to the International Criminal Court.

NERMEEN SHAIKH: Peter Bouckaert, you’ve mentioned that some air-to-surface missiles have gone missing in Tripoli in recent days. Can you say a little bit about that?

PETER BOUCKAERT: Yes, Human Rights Watch has been going around in the last week, trying to locate those various weapon storage facilities in Tripoli, because during the war, the Gaddafi forces knew that their main compounds will be bombed by NATO and destroyed, so they moved a lot of their weaponry into private companies and compounds, which makes it difficult to locate them. And we were very concerned that a lot of these weapons will fall in the wrong hands.

But secondly, we’re also very concerned that a lot of warehouses with explosive weapons, such as mines and tank shells and artillery shells, are completely insecure. I just came from a warehouse where I literally opened the gate to drive in and found a building packed to the ceiling with anti-tank and anti-vehicle mines, completely insecure and unguarded.

NERMEEN SHAIKH: Peter, the chairman of the House Intelligence Committee yesterday, Michigan Republican Mike Rogers, expressed concerns to the White House that al-Qaeda might actually capture some of these weapons. And he said, “We need to be doing more to secure these weapons systems now,” and, “There is nobody better who can get their hands on this stuff, account for it and render it safe” than the U.S. Can you comment on that?

PETER BOUCKAERT: Yes, I was quite surprised to see that there are no international forces—not forces, but organizations or individuals on the ground in Tripoli trying to secure these very dangerous weapons. We have been warning the U.S. and other Western countries that these weapons are floating around all over the country, and every time a city falls, they end up being looted. So we have expected a more forceful response to try to secure these weapons. But unfortunately, it’s now very late in the day. Every facility we go to where there were surface-to-air missiles, they’re gone. And what is left behind is World War II-era weaponry. And according to some of the rebels I’ve spoken to who have been to these warehouses after they first fell to the rebels, those surface-to-air missiles were still there when the government of Gaddafi fled. So they have been looted; they have not been removed by the Gaddafi forces.

AMY GOODMAN: Peter Bouckaert, we’d like to ask you to stay on the line. We’re going to go to break, and then, when we come back, we want to pursue the second part of this interview and also bring in a British attorney, and it’s the issue of British and U.S. intelligence working with the Gaddafi regime around extraordinary rendition and what documents Human Rights Watch has found in Tripoli. We’re talking to Peter Bouckaert of Human Rights Watch. We’ll be back with him and with British attorney Gareth Peirce in a minute. 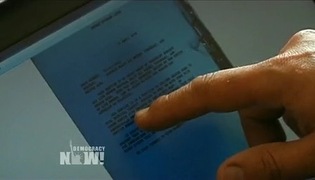