2 Years After Devastating Earthquake, Haiti’s Rebuilding Weighed Down by Legacy of Foreign Meddling

On the second anniversary of the devastating earthquake in Haiti that killed roughly 300,000 people and left more than 1.5 million homeless, we speak with Randall Robinson, author of “An Unbroken Agony: Haiti, from Revolution to the Kidnapping of a President.” The United Nations estimates international donors gave Haiti over $1.6 billion in relief aid since the earthquake and more than $2 billion in recovery aid over the last two years. But critics say little of the funding made it directly to the Haitian people, instead going to international non-governmental organizations and private companies involved in the relief effort. “I’m not surprised that the reconstruction efforts are not going well,” Robinson says, “because I don’t think the United States, officially, ever wanted anything to go well in Haiti.” [includes rush transcript]

JUAN GONZALEZ: Memorials are being held in Haiti to mark the second anniversary of the devastating earthquake that killed roughly 300,000 people and left more than 1.5 million homeless. Two years later, the recovery process is just beginning in parts of Haiti. Half-a-million people are still living in crowded camps. According to the United Nations, of the $4.5 billion pledged after the earthquake, only about $2.4 billion has been delivered. Only half of the debris littering the capital of Port-au-Prince and its surrounding areas has been cleared.

Yesterday, President Michel Martelly led a solemn ceremony that paid homage to the dead at Titanyen, a mass burial grave north of Port-au-Prince.

PRESIDENT MICHEL MARTELLY: [translated] Ladies and gentlemen, today, on January 12, 2012, we are inspired by the passage to the other side of those who died in the tragedy. They inspire us, not to lament them and to cry, but as an example, as we manage and build a Haitian habitat and construct in accordance with our nature’s security, rules and regulations. It is in this spirit that my presidency will lead the reconstruction of our country. Ladies and gentlemen, in this space of memory, I extend, on my behalf, on that of my spouse and my family and of the entire government, public institutions, my deepest sympathy to the families of all the victims of the earthquake of January 12, 2010, sympathy to those who are still alive to this tragedy, one in which we recall the responsibility of Haiti to invent another destiny.

JUAN GONZALEZ: That was President Michel Martelly of Haiti.

The United Nations estimates international donors gave Haiti over $1.6 billion in relief since the earthquake and more than $2 billion in recovery aid over the last two years. But critics say little of the funding made it directly to the Haitian people, instead going to international non-governmental organizations and private companies involved in the relief effort. Meanwhile, Haitian residents say entire neighborhoods in Port-au-Prince have been ignored during the recovery process.

OTELIER HERMAN: [translated] Two years after, nothing has been done in the poorest neighborhoods. As a citizen within the poor neighborhoods, we have found that there was not a policy for housing, and that’s why so many people have died.

AMY GOODMAN: For more on the second anniversary of the earthquake in Haiti, we’re joined by Randall Robinson, law professor at Pennsylvania State University, author of a number of books, including An Unbroken Agony: Haiti, from Revolution to the Kidnapping of a President. Randall Robinson is the founder and past president of TransAfrica. He joins us discuss his most recent book, as well, his second novel. It’s called Makeda. Set at the dawn of the civil rights era, it follows a young man coming of age in segregated Richmond, Virginia. Through his blind grandmother and her visions, he discovers his roots in Africa.

RANDALL ROBINSON: Thank you. Very nice to be here.

AMY GOODMAN: It’s great to have you back with us. Let’s talk first, briefly, about Haiti and what it faces on this second anniversary. I was with you on the journey back from the Central African Republic, when you and Congress Member Maxine Waters and others took a small plane to the Central African Republic to try to retrieve President Aristide after the coup of 2004. It is, what, seven years later. A horrific earthquake kills more than 300,000 Haitians, and we hear about the billions that perhaps never made it to the people of Haiti to relieve their suffering.

RANDALL ROBINSON: Well, we can’t trust what we’re being told by official Washington. We have every reason not to. We were on that plane to the Central African Republic to rescue the Aristides, because the president and his wife had been abducted by American Army people, personnel, and taken there against their will. That was never reported. The New York Times reported that he fled to South Africa, as if that never happened. And so, you were on the plane, and you knew what happened, but it was not reported in the United States. When we look at the WikiLeaks cables, it’s stunning evidence of the collaboration between the United States and the U.N. to first slander President Aristide, to collaborate with the Haitian police in contaminating the new police force by infusing it with hundreds of paramilitaries who had preyed upon the Haitian people belief—just terrible things that the U.S. was doing behind the scenes, and presumably continues to do. And so, I’m not surprised that the reconstruction efforts are not going well, because I don’t think the United States, officially, ever wanted anything to go well in Haiti, and more recently, of course, tried vigorously to obstruct President Aristide’s return to his country, which is a violation of international human rights law.

AMY GOODMAN: By the way, speaking of his return, in March of last year, we covered ousted Haitian President Jean-Bertrand Aristide when he ultimately did return to Haiti from South Africa, seven-and-a-half years after he had been ousted in 2004. When he landed in Port-au-Prince, he was greeted by thousands of supporters. He addressed the crowd in a number of languages. When he spoke English, he said, “Exclusion is the problem, inclusion is the solution,” indirectly referencing his party, Fanmi Lavalas, which was excluded from the latest presidential election. But when he addressed the Haitians in Creole, in their language, he was much more explicit.

AMY GOODMAN: That was President Aristide upon landing on Haitian soil with his wife and two girls, his children, after seven-and-a-half years in exile, talking about how the majority party of Haiti had been excluded from the presidential election.

RANDALL ROBINSON: Well, one has to wonder how the United States, including of course President Obama, can embrace an election that excludes the largest party in the country and then to call it democracy. It is not democracy. And no democracy should be supporting that kind of exclusion. It’s unthinkable that the U.S. would embrace and endorse and validate something as terrible an outcome and as unfair an outcome as that one has been.

JUAN GONZALEZ: What do you make of this long history now of the United States, on the one hand, seeking to want to meddle and control the political life of Haiti at the same time that you hear our leaders here complaining about how Haiti is always having instability and poverty and that all the United States can do is provide assistance or humanitarian assistance, but yet this long history of insistence on meddling in the affairs of the Haitian people?

RANDALL ROBINSON: It’s gone on for 200 years, virtually since the Haitian revolution, when freed slaves, under the leadership of Jean-Jacques Dessalines and Toussaint Louverture, with 40,000 revolting ex-slaves, turned back a French army twice, a British army and a Spanish army, and committed and produced the first successful revolution in this hemisphere, making possible the American purchase of the Louisiana Territory, because Napoleon said he was done with empire with that defeat. But it was humiliating to the West. It was humiliating to Europe. It was humiliating to Thomas Jefferson and George Washington. And it is something that has stayed in the American craw. These people fought and died for their freedom. And we did everything possible to suppress it. And that has been an unrelieved, implacable American opposition for 200 years since. What we have done to Haiti is unforgivable.

AMY GOODMAN: We’re going to break and then come back to talk about, on this eve of Dr. Martin Luther King’s birthday, the federal holiday, that in itself was so difficult to get passed in the United States, your new book, your second novel called Makeda, which is set on the eve of the civil rights era in your home town of Richmond, Virginia. We’re talking to Randall Robinson, law professor at Pennsylvania State University, author of a number of books, including An Unbroken Agony: Haiti, from Revolution to the Kidnapping of a President, past president and founder of TransAfrica. This is Democracy Now! Back in a minute.

“Memory is the Active Agent of Collective Social Progress”: Randall Robinson on His New Novel Makeda

NEXT“Memory is the Active Agent of Collective Social Progress”: Randall Robinson on His New Novel Makeda 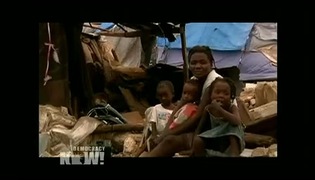