We turn now to Freeport, Illinois, where more people have been arrested protesting plans by Mitt Romney’s former company, Bain Capital, to shut the Sensata Technologies plant and move operations to China — a loss of 170 American jobs. On Wednesday, six people were arrested in the lobby of the plant during a sit-in demanding full severance pay for those who will lose their jobs. Last month, Sensata workers set up an encampment called “Bainport” across the street from the facility to protest the company’s plan to close the plant. Last week, three protesters were arrested for blocking the path of trucks leaving the plant in an effort to stop the removal of equipment from their workplace. To find out more about the “Bainport” protest, we speak with Tom Gaulrapp, who has worked at the Sensata Technologies plant for 33 years. His last day of work at Sensata is November 5, one day before the election. The protesters have invited Romney to visit “Bainport” to address their situation. [includes rush transcript]

AMY GOODMAN: We turn now to Freeport, Illinois, where six more people have been arrested protesting plans by Mitt Romney’s former company, Bain Capital, to shut the Sensata Technologies plant and move operations to China. A hundred seventy jobs will be lost. On Wednesday, six community supporters were arrested in the lobby of the plant during a sit-in demanding full severance pay for those who will lose their jobs.

We turn right now to Tom Gaulrapp, who has worked at the plant for 33 years. He is one of those who will lose his job. This follows arrests last week of people who laid down on the road to stop machinery at the plant from being moved out of the Sensata Technologies plant owned by Bain Capital.

Tom, can you give us the latest?

Yes, yesterday, six community members who support us completely, and they went, walked over to the plant. They had with them the petition that the employees had signed requesting that we receive full severance. They asked for a meeting with the plant manager; they were told the plant manager was not available. They then asked for a meeting with the human resource person; they were told that she was not available. And so, they sat down in the foyer of the plant, and the police were called. And they were asked to leave, and they said they would not leave until they had a meeting. And the police arrested six people.

AMY GOODMAN: And what’s going to happen now? Are they out?

TOM GAULRAPP: Oh, yes, yes. It’s—they were released within less than an hour of the time that they were arrested.

AMY GOODMAN: And what’s going to happen to you, Tom? When do you lose your job?

TOM GAULRAPP: Right now the schedule is that my last day of work will be November 5th, the day before the election. That is always subject to change. They may move it up, or they may move it back a week. The way it looks right now, we may be done actually a little earlier than that. But that’s the plan right now.

AMY GOODMAN: And, Tom, a lot of people are coming to town. Senator Dick Durbin just visited with folks at the encampment you’ve set up across the street from the Bain Capital-owned plant?

TOM GAULRAPP: Yes, Senator Durbin was there Tuesday, and Congresswoman Jan Schakowsky is coming on Monday.

AMY GOODMAN: We’ll be going back to Bainport to get the latest report—Bainport, what the workers are calling this encampment across the street from Sensata Technologies. And we’ll continue to follow up as these developments occur. Tom Gaulrapp, thanks so much for being with us, has worked at the plant for 33 years.

Well, we are continuing our 100-city Silenced Majority Election 2012 tour today. We’re looking for volunteers to lend a hand at upcoming events. You can go to tour.democracynow.org to find an event in your area, to click to the link to volunteers. We’ll be in Nevada City tonight. Tomorrow we’ll be in Los Angeles at the Immanuel Presbyterian Church. On Saturday, we’ll be in Santa Barbara and San Luis Obispo. And then we are headed to Oakland, California, as well as Sebastopol and Palo Alto and other places. 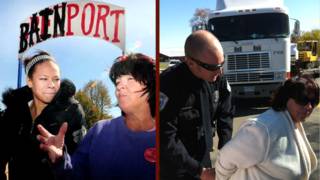