As Newtown’s First Victims Are Buried, Washington Shows Signs of Life in Taking on Gun Lobby

Residents of Newtown, Connecticut, have begun holding the first of many funerals for the 26 victims killed in Friday’s shooting rampage at Sandy Hook Elementary School. On Monday, Noah Pozner and Jack Pinto — both six years old — were laid to rest in small caskets. In the aftermath of the Newtown massacre, a number of pro-gun lawmakers are now signaling a new willingness to soften their opposition to restrictions on weapons sales. Will the Newtown massacre lead to a new way of thinking about guns? [includes rush transcript]

AMY GOODMAN: Residents of Newtown, Connecticut, have begun holding the first of many funerals for the 27 victims killed in Friday’s shooting rampage at Sandy Hook Elementary School. On Monday, Noah Pozner and Jack Pinto—both six years old—were laid to rest in small caskets. Rabbi Edgar Gluck recalled the words of Noah’s mother during the memorial service in which his brief life was remembered.

RABBI EDGAR GLUCK: She spoke about him in glowing, glowing terms. And the main thing that she left was one point, that she said, whenever he — whenever she told him, “I love you,” his answer to that was: “Not as much as I love you.”

AMY GOODMAN: The other child buried Monday, Jack Pinto, was a major fan of the New York Giants football team. His favorite player, Victor Cruz, paid personal tribute by writing ”RIP Jack Pinto” and “Jack Pinto-my hero” across his cleats during a game on Sunday. Pinto was buried in a red-and-white jersey with Cruz’s number. Later in the day, Democratic Congressmember Christopher Murphy, Connecticut senator-elect, led the House of Representatives as it observed a moment of silence to mourn the shooting victims.

REP. CHRISTOPHER MURPHY: All those wonderful little faces that you see on TV and in the newspaper, like Noah Pozner, who was laid to rest this morning, they are a reminder that despite the terrible, awful things that happen, that inside the hearts of all of us is this unbelievable goodness. That’s all Noah Pozner had, was goodness, was just this purity of spirit.

As Newtown wrestles with this grief and recovery, the thoughts and the prayers from others matter. I want to thank everyone here for all of the individual love that you’ve showered down upon our little town. I want to thank the Connecticut delegation here with me today for all of their support. It helps, in some small way, to know that the world is grieving with us.

So, Mr. Speaker, I would ask that the House now rise.

AMY GOODMAN: Connecticut Senator-elect Chris Murphy, leading a moment of silence in the House of Representatives. Meanwhile, Connecticut Governor Dannel Malloy has called for a national moment of silence this Friday, one week after the Sandy Hook shooting. Malloy spoke with reporters Monday, echoed a growing call for more gun control legislation at the federal level.

GOV. DANNEL MALLOY: These guns aren’t used to hunt deer. And, you know, I’m a—I’m a big believer in hunting rights, a big believer in supporting the Second Amendment. But there is a reality that this stuff has gone too far and is too easy to own. And then, your—the whole point of your question is that Connecticut has these laws. In the absence of a federal framework in which we limit really the explosive nature of the weapons and ammunition that’s used, no state would ever be safe based on simply its own laws. That’s why the Brady bill, that’s why the Assault Weapons Ban was so very important. Politics played a role in allowing that to expire. Politics should play a role in having it be reinstituted.

AMY GOODMAN: Democratic Senator Dianne Feinstein of California has already promised to introduce a new assault weapons ban on the first day of the new Congress, challenging President Obama to back the bill. Obama has vowed to use the power of his office to prevent more mass shootings. But speaking Monday, White House Press Secretary Jay Carney had few details of what the solution might look like.

PRESS SECRETARY JAY CARNEY: The president, as you know, has long supported reinstating the Assault Weapons Ban that expired in 2004. And as the president has said, and I just said, this is a complex problem that requires a complex and a variety of solutions. So, I don’t have a specific policy outline for you today from the president. And I think that it’s important to remember that this is about our gun laws and enforcing them, but it’s also about a broader series of issues, including issues of mental health and education and—and the like. So, the president’s position on the Assault Weapons Ban has not changed. He still supports its re-enactment. But, you know, you’ll hear from him, I think, as he said last night, in the coming weeks, to speak more specifically about what he thinks we can do, moving forward.

New Town to Newtown: How ’96 Massacre Spurred Gun Laws in Australia — and No Mass Shootings Since

NEXTNew Town to Newtown: How ’96 Massacre Spurred Gun Laws in Australia — and No Mass Shootings Since 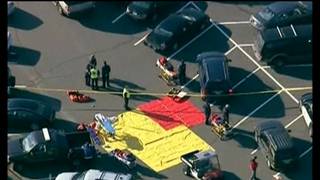