After Deadly Clashes in Cairo, Egypt Faces One of Its Largest Political Crises Since Revolution Began

The Egyptian army has deployed tanks outside the presidential palace in Cairo after six people died in clashes between supporters and opponents of President Mohamed Morsi. The violence marked the culmination of two weeks of protests after Morsi issued a decree granting himself sweeping and unchecked powers last month. Morsi’s critics have also objected to a draft constitution passed by an Islamist-dominated panel that’s scheduled for a referendum on December 15. We go to Cairo to speak with Democracy Now! correspondent Sharif Abdel Kouddous. [includes rush transcript]

AMY GOODMAN: We are broadcasting from Doha, Qatar, but we begin today’s show in Egypt, where six people are dead and hundreds wounded following overnight clashes between opponents and supporters of President Mohamed Morsi. Tanks were deployed around the presidential palace in Cairo today amidst reports of ongoing scuffles. The violence marked the culmination of two weeks of protests after President Morsi issued a decree granting himself sweeping and unchecked powers last month. Morsi’s critics have also objected to a draft constitution passed by an Islamist-dominated panel that’s scheduled for a referendum next week. Former Arab League Secretary-General Amr Moussa spoke during an opposition news conference on Wednesday.

AMR MOUSSA: [translated] Here, in your presence, we are one hand speaking in one voice in defense of Egypt and the continuation of Egypt’s revolution. Today, tomorrow and for all time, the Egyptian voice should be raised high that we are for a new and democratic nation, and not for the status quo or the division of the Egyptian people or the imposition of an unacceptable constitution.

AMY GOODMAN: The clashes mark the largest violent confrontation between Egypt’s rival groups since the uprising that ousted President Hosni Mubarak nearly two years ago. Fighting erupted Wednesday when supporters of President Morsi descended on a protest sit-in near the presidential palace, chasing Morsi opponents and tearing down their tents. The two sides battled with Molotov cocktails and rocks, with government supporters reportedly using live ammunition and tear gas. Clashes spread through the country, with Muslim Brotherhood offices set aflame in other cities.

In the latest development today, Egypt’s top Islamic body, the Al-Azhar institution, has called on Morsi to suspend his controversial decree. Meanwhile, authorities have reportedly set a deadline that expired just minutes ago for demonstrators to leave the area outside the presidential palace.

Sharif, welcome back to Democracy Now! Can you explain what’s happening right now in the streets?

What happened last night was really a major escalation in this crisis that began two weeks ago with Mohamed Morsi’s constitutional decree. We saw thousands and thousands of Muslim Brotherhood members and their allies in the ultra-conservative Salafi groups descend on the presidential palace, where there were a few hundred anti-Morsi protesters, had set up a sit-in. I spoke to many people who were there when the Brotherhood came. They said they came in very hard, tore down the tents, kicked people out, attacked several people and beat them. And this—the response to that was, of course, people coming to the presidential palace, and this escalated into massive clashes that lasted for hours, with rocks, with Molotov cocktails. You could hear the sound of shotguns or some kind of fire happening. I saw injuries of people injured with birdshot. And as it stands, as you mentioned, six people were killed. Over 670 have been injured. And many are laying the blame for this violence at the foot of President Mohamed Morsi and the Muslim Brotherhood.

What we’ve seen since this declaration came down on November 22nd by Mohamed Morsi, which granted him wide, sweeping and unchecked authorities and put him beyond the reach of the judiciary, has been only an escalation in the political crisis, a deepening of the political cleavages, and that has manifested itself so violently on the streets of Cairo now. The Brotherhood—in the wake of this—of this declaration by Morsi, we saw some of the biggest protests on the streets of Cairo here in Tahrir Square behind me. And the response by Morsi and his—and the Muslim Brotherhood, the group that he hails from, was to double down on their strategy and to force the transition.

And they called the constituent assembly, which is drafting the country’s constitution, called for a hastily—a hastily called vote, where they passed, in a 17-hour session, the constitution for the country, in a very self-congratulatory tone, passing in near unanimity most of the amendments. That text has come under criticism from rights activists, rights advocates and others for being restrictive of certain rights. But it was really the process by which it was done. It reminded many people of the Mubarak era, this tactic of ramming through legislation.

When the Brotherhood announced that they were going to hold a protest at the presidential palace, the prospect of violence was very high, and many people are blaming the Muslim Brotherhood for calling for a protest at the palace at the same time their opponents on there—are there, at this very, very tense moment, and using very aggressive language. The Brotherhood spokesperson, Mahmoud Gozlan, he said—he called for the demonstration to protect the legitimacy after the brute infringements by a group that he said thought it could shake legitimacy or oppose its opinions by force. And then we saw Essam el-Erian, a leader in the Freedom and Justice Party and the Muslim Brotherhood, saying that these weren’t clashes between supporters and opponents of the president, but they were really skirmishes between what he called “the guardians of legitimacy and the revolution” against counterrevolutionary attempts to topple legitimacy. So, you know, this kind of language and this kind of behavior resulted in these massive clashes right now. People are heading to the presidential palace again. It’s unclear where this is all going, but—but the political crisis that Egypt finds itself in is among the most severe and the deepest since this revolution began.

AMY GOODMAN: Sharif, I heard rumor—now, I heard it here in Doha, Qatar—the possibility of Mohamed Morsi and the prime minister of Turkey, Erdogan, possibly going to Gaza. Is there any word of that in the air? And the significance, what’s taking place there? Is it fueling, or how is it affecting what’s taking place in the streets of Egypt?

SHARIF ABDEL KOUDDOUS: I have not heard that rumor here. I would be surprised if Morsi decided to leave Egypt for any reason. There’s a very deep political crisis that he’s going through. Three of his advisers resigned last night, holding Morsi accountable or responsible for the violence. At least three of them resigned. That adds to three who resigned in the wake of the decree two weeks ago. And, you know, these advisers are advisers that he selected and were supposed to be the people around him that are giving him advice, but it’s very clear that these are not the real people who he’s listening to. The person selected to be his adviser for the democratic transition, Samir Morcos, wasn’t even told about the constitutional decree beforehand, and he resigned. So, Mohamed Morsi is clearly getting his advice from other people, presumably the leading members of the Muslim Brotherhood.

And right now, as it stands, they’re pressing forward with this referendum that Morsi called for on December 15th. The Muslim Brotherhood is saying, “Look, we’re allowing for the democratic process to take place. If in fact there is a majority that does not approve this constitution, then let them speak at the polls. Let them speak with their votes.” However, the opposition is saying that this is a false choice that is being presented to them, that on the one hand, there’s a choice of accepting a constitution that many members of the opposition, as well as members of the Coptic Christian church, Egypt’s minority group, were—did not have a hand in passing, and on the other hand, if the constitution is voted down, there has been no clear plan given by the presidency of what would happen then. Presumably, Morsi would retain these unchecked and sweeping powers that he granted himself in the decree. So, they’re saying that this is a false choice being presented to them. And as well as the pure logistics of the poll appear to be breaking down. We’ve seen judges go on strike, several judges’ groups, major judges’ groups, announcing that they’re going to boycott the referendum and participate. By Egyptian law, judges need to be at the polling stations to oversee the vote. And just recently, there are reports that 200 ambassadors in embassies across the world are refusing to oversee the referendum for Egyptian expats abroad. That voting is supposed to start on Saturday.

AMY GOODMAN: Sharif, finally, Ahram Online is reporting a journalist was one of the six people who were killed in the overnight clashes in Cairo, El-Hosseini Abul-Deif, working for the El-Fagr newspaper.

SHARIF ABDEL KOUDDOUS: I heard similar reports, as well. We don’t know if that’s been confirmed yet. Again, the clashes were very brutal, going back and forth for hours last night, with people firing. There was loud bangs happening, a lot of rock throwing, people firing fireworks at each other, Molotov cocktails, cars were burned down, and many injuries, head injuries from rocks and so forth. And so—and as yet, the country is still waiting for Mohamed Morsi to make a statement. He has not appeared on television or made a statement since calling for the referendum on Saturday. So, we’ll have to see where this goes from now, but the prospects of holding a referendum, or its credibility and legitimacy, have been seriously called into question. And the future of this transition, the future of the presidency now—you know, the calls in the beginning, the official demands, were for Morsi to reverse his decree and for Morsi to postpone the referendum and perhaps form a new constituent assembly. Now the calls are growing for Morsi to step down. And we’re hearing the same kind of language that we heard from protesters during Mubarak’s ouster. So, we’ll have to see where it’s going to go in the next few days and weeks.

AMY GOODMAN: Well, Sharif Abdel Kouddous, I want to thank you so much for being with us from Cairo, Democracy Now! correspondent. And we’ll link to your pieces at thenation.com.

This is Democracy Now!, democracynow.org, The War and Peace Report. When we come back, we turn here to the U.N. climate change summit that’s taking place in Doha, in the Gulf emirate of Qatar. Stay with us.

“We Are Running Out of Time”: Obama Urged to Match Rhetoric to Action on Climate Deal

NEXT“We Are Running Out of Time”: Obama Urged to Match Rhetoric to Action on Climate Deal 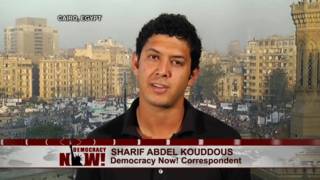