Senegal appears headed to a runoff election after a heated first round of voting and a year of protests against President Abdoulaye Wade’s decision to seek a third term, despite a constitutional two-term limit. The protests are “the most bloody and blood-filled campaign that the country has ever known,” says Arame Tall, a Senegalese analyst. Over the past year, a movement led by a number of Senegalese rappers has helped mobilize the country’s youth against Wade, joining the main opposition and civil society group, the June 23 Movement, or M23. “The reference is not really the Arab Spring here, but rather the history of renaissance in Africa and the history of political change, which we’ve started, but now which we really need to substantiate,” Tall says. We also speak with Ken Silverstein, a contributing editor at Harper’s Magazine, a fellow at the Open Society Institute and investigative journalist with the group Global Witness. [includes rush transcript]

AMY GOODMAN: We turn now to Senegal. In Senegal, it appears that the country is headed to a runoff election following a heated first round of voting. The race pitted President Wade against a wide field of challengers. Results from Sunday’s voting gave Wade 32 percent, making it likely he’ll face former prime minister and protégé Macky Sall in a runoff next month.

Wade’s re-election bid has been mired in controversy. Protests against his government have intensified over the past month, after Senegal’s highest court cleared him to seek a third term despite a constitutional two-term limit. Over the past year, a movement led by a number of Senegalese rappers has helped mobilize the country’s youth against the current president, joining the main opposition and civil society group, the June 23rd Movement, or M23. After a year of protests sweeping Muslim countries, some say Senegal, a Muslim African country, could be next.

Joining us in Senegal is Arame Tall, a Senegalese commentator and consultant. In Washington, D.C., Ken Silverstein is with us, contributing editor at Harper’s Magazine, a fellow at the Open Society Institute, investigative journalist with the group Global Witness.

I want to begin with Ken in Washington, D.C. Explain the significance of the Senegalese election, Ken.

KEN SILVERSTEIN: Well, it’s a hugely important vote, not just for Senegal, but for the whole region. Senegal became independent in 1960, and there’s an uninterrupted record of regularly held elections there. It’s the only country on the mainland of West Africa where there’s never been a military coup. And in fact, the military has pretty much been invisible. I mean, it remains in the barracks. It’s firmly under civilian control. And so, when the President decided he wanted to run for a third term, despite being fairly apparent that the Constitution did not allow for this—I mean, I’m not going to go through all the contorted arguments he made—it was clear that it amounted to what his opponents called a “constitutional coup.” And so, for the first time, it appeared that Senegal might be in real trouble, that democracy in Senegal might be in real trouble. And that would clearly be a disaster, again, not just for the country, but the whole region, because it really has been a model of tolerance and democracy. I mean, things there are unperfect, there’s all sorts of problems, but in terms of democracy, it’s really the most inspiring place in that part of the world.

AMY GOODMAN: Arame Tall, can you talk about the significance of this right now in Senegal and the number of people who have been imprisoned or have been killed in the lead-up to this election?

ARAME TALL: Thank you very much, Amy, for having me on the show.

I concur with what the previous speaker has said. This has been a major election for everyone, I think, in Senegal and outside following closely Senegalese elections. No one has been imprisoned in the lead-up to the—just to clarify, in the lead-up to the election. What has happened, however, has been the most bloody and blood-filled campaign that the country has ever known. I think the previous speaker has said it very nicely. We’ve had 10 elections since independence. Every one of them has had its ups and downs, but all towards the consolidation of democracy. But this year, we’ve had 12 people die in the run-up to the election and in contestation protest of President Wade’s attempt to have a third bid at the presidency, which the Constitution clearly does not allow him to do.

AMY GOODMAN: And the rappers who have led the protests, Arame Tall?

ARAME TALL: We’ve also had something very peculiar in Senegal this year, a group of rappers, the Y’en a Marre people — in English, that translates into “We are fed up” — has had such resonance in the nation, that has brought out really something that even Senegalese people and observers of the elections had never seen in the past. People came out into the streets screaming that slogan, “Y’en a Marre! We’ve had enough!” under the leadership of the rap group, but also of a larger movement that really came to birth nine months ago, on June 23, to shout out its outcry that we’ve just had enough. We want substantive democracy, and we want Wade to just understand that he’s not allowed to run a third time, and that’s it.

AMY GOODMAN: Ken Silverstein, you were in Senegal. Why did you get interested in this particular story? And would you say we are talking about an equivalent of the Arab Spring?

KEN SILVERSTEIN: Well, Amy, to be honest, I went to Senegal en route to another destination. I was there to do some modest research, really. But as soon as I arrived, it was clear that it was a very, very interesting political moment. You started talking to people, and everyone was talking about how fed up they were with the current president, Wade, who’s been in power for many years and all sorts of corruption. And, you know, he’s built these ridiculous monumental projects, including this African Renaissance monument that the North Koreans came in to build for, I think, $27 million. And meanwhile, people are becoming poorer and poorer and poorer. So, oddly enough, I went there with not really the intention of writing about the election at all, and it was really was a stop en route to somewhere else, but it just seemed like such a fascinating moment that I wanted to write about it. You know, you just—you go anywhere in Senegal, and people were mad and talking about this election and really wanting the end of this government.

In terms of the Arab Spring, you know, I don’t think it’s that sort of situation, personally. I have to say, I am not an expert on Senegal. I was there for a couple of weeks. I deeply immersed myself in the country, but I’m not a scholar. But if you look at the situation and compare it to the—you know, the Arab Spring countries, the level of tyranny in the Arab countries was quite different. I mean, Senegal has, again, all sorts of problems, terrible economic inequality, but the people do have a role in the government and in the democracy. And it looks like Wade now is going to go to a runoff. It’s very, very hard to imagine him winning in the second round, where you’ll have a united opposition. And so, unless—now, I mean, anything can happen in a runoff election, and the government has a lot of power and a lot of patronage power to try to change the outcome. It’s hard to see, though, how he’s going to win without serious outright fraud in the second round. And so, assuming he hands over power peacefully, if he does lose, then I think the crisis will be resolved. It doesn’t have the feel, to me, of an Arab Spring situation, because you don’t have a history of intense political repression, and the people do have a role in the government. Again, not a perfect role. I’m not trying to—you know, this is not a model democracy, but it’s also—it’s not Libya, it’s not Egypt. It’s a very different situation.

AMY GOODMAN: Arame Tall, can you talk about President Wade’s son, Karim Wade, who is being groomed to take power, and the significance for you, as a Senegalese, of what this turn of events will mean, if in fact Wade does cede power?

ARAME TALL: Amy, Wade was our Obama in year 2000, as I like to always make that comparison. He came in 2000 and was the leader of a monumental regime change. We were independent in 1960. For the 40 years after that, we’ve been under the leadership of the Socialist Party. Wade changed all that in 2000 and came with the hope and the slogan of change, Sopi, in Wolof.

So, when he, five years later, tried to groom his son—and acts have been posed to convince us indeed that he was grooming his son to take over—people started to resent him, because, to this day, I think, even if you talk to the most seasoned analyst of political evolution in Senegal, they’ll tell you that Wade, really, people still love him. But It’s because of his son that people have literally turned against him. And today you see the youth, that was his horse, his running horse, literally, back in the 2000 and 2007 election—now the youth has turned its back against him. And that’s really the monumental change, which he realized, I think, a few days ago, when he went to vote, and he was booed at his own voting office.

AMY GOODMAN: I want to thank—

ARAME TALL: As for the Arab Spring—if I may intervene a bit. I don’t know if we have time.

ARAME TALL: It’s very different. Senegalese context is extremely different, and the reference is not really the Arab Spring here, but rather the history of renaissance in Africa and the history of political change, which we’ve started, but now which we really need to substantiate. Thank you.

“A Moral Catastrophe”: Africa CDC Head Says Lack of Vaccines for the Continent Will Imperil World 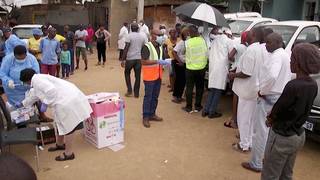 “A Moral Catastrophe”: Africa CDC Head Says Lack of Vaccines for the Continent Will Imperil World