As Georgia votes in its Super Tuesday primary, the State Senate has voted to ban undocumented immigrant students from all public universities. Undocumented students from Georgia are already barred from the state’s five most competitive schools and must pay out-of-state tuition at other state schools. “Telling us that we cannot obtain higher education, that we cannot go to college or community college, even if we work hard and do our best in school, it is crushing dreams, it is crushing goals,” says Keish Kim, an undocumented student from South Korea who now attends Freedom University, an ad hoc underground school in Athens, Georgia, where university professors volunteer to teach undocumented students kept out of public classrooms. We also speak with Azadeh Shahshahani, director of the National Security/Immigrants’ Rights Project at the ACLU of Georgia. [includes rush transcript]

AMY GOODMAN: In a moment we’re going to talk about the significance of Georgia. One of the most critical fights over nuclear power is taking place there. But first, well, it is Super Tuesday, and Georgia is one of the 10 states up for grabs in the Republican presidential contest. We turn to two issues that have been overlooked in the frenzy over the Republican primary. We begin with immigration.

On Monday, Georgia’s State Senate approved a measure that would ban undocumented immigrant students from all public colleges and universities. The measure comes on top of the already existing policy in Georgia that bars undocumented students from the state’s five most competitive schools, including the University of Georgia. It also comes nearly a year after Georgia became the first state to enact a copycat law modeled on Arizona’s anti-immigrant law requiring police to demand documentation of residency and to detain people they suspect are in the country without permission.

For more, we’re joined by two guests. Azadeh Shahshahani is the director of the National Security/Immigrants’ Rights Project at the ACLU of Georgia. We’re also joined by Keish Kim. She is an undocumented student and organizer with the Georgia Undocumented Youth Alliance, a student at Freedom University, an ad hoc underground school in Athens, Georgia, where university professors volunteer to teach undocumented students kept out of the classroom.

We welcome you both to Democracy Now! Let’s begin with Azadeh Shahshahani. Talk about the legislation that has just been passed by the Georgia State Senate, expected to be passed by the Assembly, as well.

AZADEH SHAHSHAHANI: Yes, thank you very much, Amy, for having us.

The legislation passed yesterday was an amendment, and we’re currently studying the language of the amendment to understand its implications. And a lot is going to depend on the interpretation of the Board of Regents of what the amendment will do, but the intent of the legislators who put this legislation forward is clear. And their intent is to ban undocumented students from access to public higher education. You know, we know that the issue of tuition and receiving in-state tuition versus out-of-state tuition is not at issue here, because undocumented students are already paying out-of-state tuition in Georgia. So we’re talking about enrollment.

AMY GOODMAN: Who are the forces behind this legislation that is passing through the legislature?

AZADEH SHAHSHAHANI: It’s a very small group of legislators, and really, you know, behind them is the extremist right-wing forces who are pushing forward this racist attack on undocumented students. You know, even many of the legislators who last year were behind House Bill 87, the anti-immigrant legislation that you talked about, were not behind this legislation for various reasons. You know, for one thing, our state has already seen the impact of House Bill 87 and, you know, the devastating impact on the agriculture industry, on the reputation and the image of our state. And so, the leadership, including the governor and others in the leadership of the state legislature, did not really want to see any other pieces of the anti-immigrant legislation pass this session.

And then, the other thing, again, is that this legislation targets students, who have worked so hard to get to this state and get to this stage in their lives, and they’re paying their own way. And so, you know, we had a House version of this legislation that was introduced earlier in the session, and because of the overwhelming opposition and the voices from across the state from the educators and students, that the vote on the measure was suspended, and, you know, effectively, the legislation was halted. And, you know, so we were celebrating that victory, and all of a sudden we were presented with this other attack of basically inserting this provision banning undocumented students from access to public higher education inside a bigger bill that would amend House Bill 87 in some other ways, so as a—you know, as a way to push it forward.

AMY GOODMAN: Keish Kim, you are an undocumented student from South Korea. Explain what Freedom University is and also why you’ve chosen to come forward.

KEISH KIM: Well, thank you, Amy, for this opportunity. Freedom University is a volunteer-led organization that provides rigorous college-level education to all students regardless of their immigration status or any other discriminatory policies. And it’s really interesting because the classroom is consistent—consists of many students, undocumented and not, are there because they love learning. And I decided to come forth, because I thought it would be important to have the voice and a face of an undocumented student going through these policies and going through this rhetoric in a state who loves learning and who wants to achieve higher education, to voice out how I feel and how we feel and how this will impact the country and the state.

AMY GOODMAN: Now, the whereabouts of Freedom University in Athens, Georgia, is not actually known, Keish?

KEISH KIM: We were afraid that possible demonstrations or oppositions will deter the classroom setting and education. So, for that reason, we have kept it safe.

AMY GOODMAN: And when did you come to the United States?

KEISH KIM: Oh, I came here when I was eight years old.

AMY GOODMAN: Have you tried to become documented?

KEISH KIM: That is a common mistake or misconception, is that there is no pathway to citizenship or documentations at this point in the United States.

KEISH KIM: Well, there is no line. If you become undocumented in the United States, there isn’t a line or a paper that you can fill out to become a resident or a U.S. citizen. That’s why there are certain federal bills and laws that are trying to be passed for the last 10 years that will provide a pathway to citizenship for students and youth like myself.

AMY GOODMAN: Are you concerned, by coming forward and talking about being undocumented, that you could be deported?

KEISH KIM: Right, there are many risks that comes with this, but I think that it is important for me and students like myself to come forth and voice our opinions, or else these policies will just come on and on, attacking us over and over again. And that’s why I’m risking caution and just coming forth to urge and just display how much of an impact these kind of bills have on students and youth all over the country.

AMY GOODMAN: What impact do these laws on higher education have for undocumented immigrants like yourself, Keish, who grow up here in the United States?

KEISH KIM: Right. We have to understand that a lot of us—I came at the age of eight, but there are many various of students who come at—when they are one or a few months old, and we learn that this is our country. Telling us that we cannot obtain higher education, that we cannot go to college or community college, even if we work hard and do our best in school, it is crushing dreams, it is crushing goals. You’re telling someone that they can’t do something, that they can’t achieve something. That, you cannot express in words.

AMY GOODMAN: Now, you applied to Georgia’s universities to go to college after graduating from high school?

AMY GOODMAN: Were you accepted?

AMY GOODMAN: So, why didn’t you go?

KEISH KIM: Well, one of the main factors was that I had to pay out-of-state tuition. It was too expensive, and my family couldn’t afford that.

AMY GOODMAN: Explain why you had to pay out-of-state tuition if you’re from Georgia.

KEISH KIM: That’s because I’m an undocumented student, so the schools had considered me an international student and asked me to pay out-of-state tuition. That goes behind the reasoning of—that undocumented immigrants in Georgia do not pay taxes. But again, that’s another misconception. My parents have been paying taxes for the past 10, 12 years that we’ve been here in this country.

AMY GOODMAN: What are you going to do about this legislation that has passed the State Senate, moves on to the Assembly, and would have to be signed by the governor to be signed into law, but could well happen?

AMY GOODMAN: What are your plans? What do you plan to do about it? Are you organizing?

KEISH KIM: Yes. Well, I am with the Georgia Undocumented Youth Alliance, and we strive to make sure that these bills do not happen and does not pass. If it were to pass, at a personal level, I would have to apply to schools that are out of state, unfortunately, and figure out if I can receive scholarships and private scholarships that will aid me in obtaining higher education and achieve my goals. At the community level, we will have to make sure to offer resources to students and make sure that they don’t give up on their dreams, they don’t give up on their goals, and make sure that they can obtain higher education, and just offer that help that they need.

AMY GOODMAN: Well, I want to thank you both for being with us. Keish Kim, Freedom University student and organizer, a university somewhere in Athens, Georgia, she’s with the Georgia Undocumented Youth Alliance. And Azadeh Shahshahani, director the National Security/Immigrants’ Rights Project at the ACLU of Georgia.

When we come back, we’ll remain in Georgia looking at, well, possibly the first nuclear plants to be built in decades. And then we’ll go to Russia to talk about the massive protests that are taking place with the return of Putin to the Russian presidency. Stay with us. 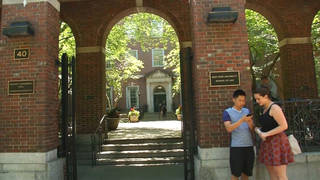