Set to be implemented by 2017, Vermont’s healthcare overhaul goes well beyond the new federal law. The Vermont Patient Protection and Affordable Care Act, enacted last month, will make Vermont the first state in the nation to offer single-payer healthcare. On Thursday, Vermont Gov. Peter Shumlin hailed the Supreme Court decision upholding the federal Affordable Care Act, but he said Vermont would probably be least impacted by it. “We’ve had a long history of healthcare reform and a real priority of taking care of our citizens,” says Robin Lunge, Vermont’s director of Health Care Reform. “We’re not interested in waiting for the nation to catch up with us.” [includes rush transcript]

JUAN GONZÁLEZ: Well, I’d also like to bring into the conversation Robin Lunge, director of Health Care Reform for the state of Vermont. In May, Vermont Governor Peter Shumlin signed a healthcare reform bill that will make Vermont the first state in the nation to offer single-payer healthcare beginning in 2017. The Vermont Patient Protection and Affordable Care Act aims to stem the rising cost of healthcare and provide universal coverage.

AMY GOODMAN: On Thursday, Governor Shumlin hailed the Supreme Court decision upholding the federal Affordable Care Act, but he said Vermont would probably be least impacted by it. Possibly the biggest effect of the federal law will be funds to help the state pay for its new healthcare system.

Robin Lunge, welcome to Democracy Now! Explain the system you are putting in place in Vermont and how the ACA, this law, affects it.

ROBIN LUNGE: Hi. Thanks very much.

Yes, so, in Vermont, we’re looking to move forward with a Vermont-style single-payer system, which will ensure that every Vermont resident has healthcare as a right and not a privilege. So, in terms of the ACA, we are looking to move forward with a waiver from the ACA, when that is available, so that we can move to a single-payer system and not continue to operate a private insurance-based system.

AMY GOODMAN: And how did you accomplish this? And how do you feel about the single-payer activists who were deeply disappointed yesterday? They wanted the—some of them wanted the Affordable Care Act to fail, because they felt it would create much greater impetus for Medicare for all—you know, just dropping the words “over 65” from Medicare.

ROBIN LUNGE: I certainly understand the disappointment of the single-payer advocates on the national level. In Vermont, we’ve had a long history of healthcare reform and a real priority of taking care of our citizens, so we’re not interested in waiting for the nation to catch up with us. So, for us, we are in a different position than a lot of other states.

JUAN GONZÁLEZ: Well, I’d like to bring in Ollie Fein and ask you—Republican Senator Marco Rubio of Florida reacted to the Supreme Court’s ruling on the healthcare law by saying it’s effectively a middle-class tax increase.

SEN. MARCO RUBIO: A victory for the Obama administration means a middle-class tax increase, and that’s exactly what this is. Let’s be clear. The Supreme Court rules only on the constitutionality of things. They don’t rule on whether it’s a good idea or a bad idea. And I think, after all the noise is done, I hope people back home fully understand what this means.

JUAN GONZÁLEZ: That was Senator Marco Rubio of Florida speaking on Fox News. Ollie Fein, this issue now that—which obviously will become a major issue in the upcoming election with the Republicans, that this is a huge, unprecedented tax increase of the federal government on the middle class?

DR. OLIVER FEIN: Yeah, there is an element, frankly, of truth to that. The real benefit of a single-payer approach, right, is that we would move from our multi-payer, for-profit health insurance industry to a Medicare-for-all kind of program. Medicare has an overhead of only 3 percent. That means that 97 percent of all dollars collected by the Medicare program go to pay doctors, hospitals and for prescription drugs. Private health insurance has an overhead of somewhere between 20 and 30 percent, which means that only 70 or 80 percent of the dollars collected in premiums go to pay for care.

But that’s only part of the story, because, you know, then the providers—for instance, hospitals—have to have a staff to deal with all those companies. We compared Toronto General in Canada with the Mass General in Boston: three billers up in Toronto General, over 300 billers at the Mass General. One could save an enormous amount of money. And the same thing is true, frankly, in doctors’ offices. We all need somebody there to deal with the denial of claims, the different prior approval guidelines that each company has. We have, frankly, a lot of waste in the healthcare system because of the private health insurance industry.

AMY GOODMAN: Robin Lunge in Vermont, head of Health Care Reform, how did you beat the insurance industry in achieving this legislation for Vermont?

ROBIN LUNGE: So, in Vermont, I think we—we have a culture of taking care of each other. And so, it’s very important to Vermonters that everyone have coverage. And I think part of the way we involve the insurance companies is that, currently in our state system, we contract out certain services. So we may continue to contract out certain services, so there would continue to be a role for one payer, and that could be an insurer, depending on how much they came in for a bid and how much they’re willing to reduce administrative costs. So I think, partially, we were looking for ways to ensure that we got to the Gold Star and that there was a role for at least one payer.

AMY GOODMAN: Why didn’t President Obama, Ollie Fein, do a public option? And do you see—although many people now, like the Progressive Caucus, said if it wasn’t passed, ACA, it would immediately push for Medicare for all. Do see that momentum right now?

DR. OLIVER FEIN: Well, you know, I think there needs to be a grassroots movement that sees the value of moving in this direction, right? Frankly, the pain that we see and suffering that patients are going through in this present system, I think, is going to generate a real movement among people. This could be the civil rights movement of the 21st century in this country. And so, I see that kind of movement as being the thing that will lead us to, in fact, get to a universal coverage system, a single-payer, Medicare-for-all kind of approach.

JUAN GONZÁLEZ: Yeah, I’d like to ask Wendell Potter, where do you see the insurance industry going from here now, in terms of what—you were a spokesman for CIGNA for a while. You know the industry well. Where do you see the strategy of the industry now to maintain its goal of highest profitability possible, now that the new system has been approved by the Supreme Court?

WENDELL POTTER: It will have a couple of strategies. One will be to try to influence how the Affordable Care Act is implemented at the state level and to influence the regulation writing, which will continue. The other strategy will continue what it has been doing for decades, which is to define the single-payer movement in negative ways. And I was a part of that, and I know how successful it has been. And I agree with Dr. Fein, it would be wonderful if there could be a grassroots movement. But we’ve been—I’ve been observing the fact that that has not been happening, has not taken root, if you will. And that is because the entrenched special interests—certainly the insurers—have spent an enormous amount of money to influence public opinion—and to even call the Affordable Care Act a government takeover of healthcare. They know, to communicate, you have to communicate to reach people emotionally, and they spend an enormous amount of money to misinform people. That will continue.

And that is why—and my sympathies are with the single-payer people. But they just really, really need to start thinking about this and working in a more strategic way, and realizing that grassroots is important, but it absolutely is not the only way to get where we need to go. That’s got to be the focus.

AMY GOODMAN: I want to thank you all very much, Wendell Potter, former spokesperson for CIGNA; Robin Lunge, director of Health Care Reform for Vermont, Governor Peter Shumlin. Thank you very much to Oliver Fein, past president of the [Physicians for a] National Health Program; Jodi Jacobson of RH Reality Check.

I’ll be on HBO, Real Time with Bill Maher tonight. Check it out. 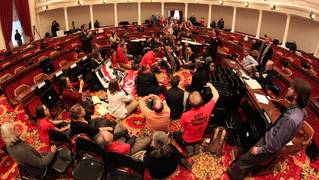