We turn now to Vermont, where a sit-in demanding single-payer healthcare erupted during Gov. Peter Shumlin’s inaugural address on Thursday. This comes after Shumlin backed down in December on his promise to create a single-payer healthcare system in the state. During Thursday’s sit-in, protesters sang songs and expressed their disappointment as they called out their demands and were arrested. We speak to James Haslam, director of the Vermont Workers’ Center, which coordinates the Healthcare is a Human Right Campaign.

JUAN GONZÁLEZ: We turn now to Vermont, where a sit-in demanding single-payer healthcare erupted during Governor Peter Shumlin’s State of the State address on Thursday following his inauguration. This comes after Shumlin backed down in December on his promise to create a single-payer healthcare system in the state. Shumlin first won election in 2010 with a pledge to make Vermont the first state in the country with a single-payer system. But in a report released at the end of December, he said the program would draw fewer federal funds than expected, and tax hikes needed to fund the system had proven too high.

GOV. PETER SHUMLIN: I’m not going to undermine the hope of achieving critically important healthcare reforms for this state by pushing prematurely for single-payer when it’s not the right time for Vermont. … This is the greatest disappointment of my political life so far, that we couldn’t advance this ball as quickly as we had wished. But we shall persevere. We shall get it right. We shall push on.

AMY GOODMAN: During Thursday’s sit-in, protesters sang songs, expressed their disappointment, as they called out their demands and were arrested.

AMY GOODMAN: Since no candidate for governor won more than 50 percent of the vote in November’s election, a provision in the Vermont Constitution required the Legislature to decide the race. The mainly Democratic Legislature chose incumbent Governor Peter Shumlin over his challenger Scott Milne, who earned just over 45 percent of the vote in November compared over 46 percent for Shumlin. So it was yesterday morning that the Legislature chose Shumlin as the governor and yesterday afternoon that the State of the State happened and these protests took place.

Well, we’re joined right now by one of the leaders of the protest, of the sit-in, who has been leading the push for single-payer healthcare since 2009. James Haslam is director of the Vermont Workers’ Center, which coordinates Healthcare is a Human Right Campaign, joining us by video stream.

Welcome to Democracy Now! A highly unusual day—people had not taken over the floor of the Vermont Legislature before in Montpelier, and Governor Shumlin chosen by the Legislature. James, talk about everything that took place yesterday.

JAMES HASLAM: Thanks, Amy and Juan. Yes, yesterday was an incredible day. We had hundreds of people come out on an incredibly cold day. You know, windchill factors were negative-30 in Vermont yesterday. And, you know, we started off the day right down the street from the State House in a church. We had a People’s State of the State address, a speak-out, where the Healthcare is a Human Right Campaign was joined by the folks from immigrant right organizations, climate justice organizations, disability rights organizations, unions—you know, an incredibly broad range of folks—to talk about a vision forward, which—including, obviously, focusing on universal healthcare, but how that is also connected to actually all of our human rights and having the kind of democracy and economy that works for all the people. And then we marched down to the State House through these cold temperatures and ended up packing the State House before the State of the State address, as you had said, and singing and ended up, you know, being there basically for many hours throughout the day.

JUAN GONZÁLEZ: And, James, what about the governor’s claim that the taxes required to be raised would be far too onerous for the citizens of Vermont in terms of implementing single-payer? What’s your response?

AMY GOODMAN: Something like 11 percent on payroll, 9 percent on income tax.

JAMES HASLAM: Well, they just released a report. And the law that we passed in 2011 required the governor to develop a proposal how to finance it. And it was actually due two years ago as part of the law that we passed in 2011. And, you know, he waited until after the election. He said he had to wait to make sure he got it right. And his job was to come forth with a proposal that then the Legislature would determine whether we could do or not. And instead of doing that, he said that, you know, this is the best he could do, but he thinks that Vermont can’t afford it.

We’ve spent the last few days, and others have, including a lot of economists, who have dug into the report—some really good work was done in there, and it actually shows that Vermont can do this, that it actually benefits the majority of people, but it would require us raising taxes on—keeping high levels of taxes on large corporations and on wealthy folks. And that was, you know, a political choice that he said that we couldn’t afford. And what we say is, we can’t afford the current system. It’s a crisis in our communities, and we have to keep moving forward.

AMY GOODMAN: And to state legislators who supported single-payer, said you hurt the cause by sitting in and disrupting the inauguration?

JAMES HASLAM: Well, you know, we are coming to say, yesterday and all the days to come that we need to, that we are not going to stop. We’ve come way too far. We’re not turning back. Vermont has passed a law saying that healthcare is a public good, and that they have a job to take up this financing report and take it seriously.

AMY GOODMAN: We will leave it there, James Haslam, director of the Vermont Workers’ Center. 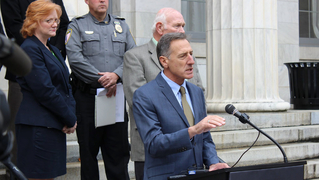