This month marks the 50th anniversary of the assassination of President John F. Kennedy in 1963. It is a topic our guest Thom Hartmann wrote about the 2009 book, “Legacy of Secrecy: The Long Shadow of the JFK Assassination,” co-authored with Lamar Waldron. Warner Brothers is now making the book into a movie, starring Leonardo DiCaprio in the role of FBI informant Jack Van Laningham. The topic of JFK’s assassination has also been in the news after last week’s interview with Secretary of State John Kerry on NBC, in which he expressed doubts about whether JFK’s accused shooter acted alone. Kerry was questioned about those remarks Sunday by NBC’s David Gregory. Kerry declined to elaborate on his beliefs about a possible conspiracy surrounding the assassination.

StoryNov 05, 2013Oliver Stone on 50th Anniversary of JFK Assassination & the Untold History of the United States

AMY GOODMAN: Next week, November 22nd marks the 50th anniversary of the assassination of John F. Kennedy, 1963. It’s a topic our guest, Thom Hartmann, wrote about in his 2009 book that he co-authored, Legacy of Secrecy: The Long Shadow of the JFK Assassination. Warner Brothers is now making the book into a movie, starring Leonardo DiCaprio in the role of FBI informant Jack Van Langingham.

Well, the topic of JFK’s assassination has also been in the news after last week’s interview with Secretary of State John Kerry on NBC, in which he expressed doubts about whether JFK’s accused shooter, Lee Harvey Oswald, acted alone. Kerry was questioned about those remarks Sunday by NBC’s David Gregory.

DAVID GREGORY: Mr. Secretary, a final question before you go. You gave some comments in light of the 50th anniversary of the assassination of President Kennedy to NBC News that have now been widely broadcast and reported on. And in those comments, you said this: “To this day, I have serious doubts that Lee Harvey Oswald acted alone.” That certainly would be surprising to a lot of people that those are your views. Would you care to elaborate?

SECRETARY OF STATE JOHN KERRY: No. I just have a point of view. And I’m not going to get into that. It’s—you know, it’s not something that I think needs to be commented on, and certainly not at this time.

DAVID GREGORY: Do you think the conspiracy theories—his involvement with Russia, motivation from the Soviet Union or Cuba—are valid at some level?

SECRETARY OF STATE JOHN KERRY: David, I’m not going to go into it. It’s just inappropriate, and I’m not going to do more than say that it’s a point of view that I have. But it’s not ripe or worthy or appropriate for me to comment further.

AMY GOODMAN: That was John Kerry this weekend on—speaking to NBC’s David Gregory. Your response to this, Thom Hartmann, and why you think this is at all interesting to look at 50 years later?

THOM HARTMANN: Yeah, well, John Kerry’s saying, you know, it probably wasn’t Oswald and maybe it was a conspiracy, it’s like, surprise, surprise! The House Committee on Assassinations did an exhaustive look at this, and they concluded not only, you know, that Oswald did not act alone, but that all the evidence indicated that there was a conspiracy, and that, in all probability, Carlos Marcello and Santo Trafficante, the two big mob bosses that Bobby was aggressively prosecuting, had the motive, means and opportunity—phrase of the House Select Committee—to have committed the crime. So, you have that. Secondly, you have—you know, naval intelligence did an exhaustive look at Lee Oswald, specifically, after all this, and concluded that there was no possibility that he could have been the shooter.

AMY GOODMAN: And yet you have the Warren Commission that said not only was he the shooter, but that he acted alone.

AMY GOODMAN: Talk about who was on that commission and when they came out with their findings.

THOM HARTMANN: Yeah, there’s a reason for this. Jack and Bobby Kennedy, just before the assassination, were doing two simultaneous things. One, they were very aggressively—and very, very close to successfully—trying to negotiate peace and rapprochement with Castro. At the same time, they were planning an assassination of Castro. It was going to be on December 5th of 1963. And the assassination—that plot to assassinate Castro was found out about and somewhat infiltrated by the mob, by Trafficante and Marcello. And they turned—they used—how to say this? When the assassination happened, LBJ concluded, very quickly—in fact, a number of people in the government concluded very quickly, because of the apparent involvement of Oswald—that Castro was somehow involved.

Now, right after the Cuban missile crisis, we almost had World War III. If the American people thought that Castro had killed the president of the United States, there would have been such a hue and cry for a war against Cuba, which Kennedy knew would cause Khrushchev to very probably start World War III, and it would be a nuclear war, and civilization might not even survive, that the American people had to be convinced, at all costs, that Castro had nothing to do with this. And yet, at that point in time, many of the people, senior people in the government, were convinced that Castro was responsible. So, the Warren Commission report—I mean, this is why Earl Warren had the tears running out of his eyes when Jack—when President Johnson commissioned him to do it, because he basically said, “We’ve got to cover this thing up.” And so, the Warren Commission report was largely a whitewash to avoid that from coming out.

AMY GOODMAN: And what about the significance of today’s secretary of state, John Kerry, saying, “I don’t want to talk about it, but I think it involves Russia and Cuba, and I think that the story that we know, the establishment story, is not true.”

THOM HARTMANN: Yeah, yeah. The—with virtual certainty, I can say that, you know, it was the mob who killed Jack Kennedy. At that—in that context, I mean, there was involvement of others within our government and whatnot, but principally it was the mob. The FBI was following these people. You know, the FBI failed, in many ways, hugely, and to this day they would really rather not own up to that. Jack Van Laningham, for example—

AMY GOODMAN: Explain who he is. You know, he’s going to—

AMY GOODMAN: This is—he’s the focus of—

THOM HARTMANN: He’s the character for this movie, yeah.

AMY GOODMAN: —the film that—

THOM HARTMANN: Yeah. And Jack was the cellmate with Carlos Marcello for a number of years, and he was an informant for the FBI. And they were audio-taping his conversations with Marcello, where Marcello basically laid out they did everything. I mean, this—it’s just—it was fairly straightforward.

AMY GOODMAN: And why does it matter now?

THOM HARTMANN: It matters now, I think, because—well, for two reasons. One, the killing of Jack Kennedy was a consequential change in the direction, the political direction, of America. And number two, I think it’s really important that we know our own history, even when it’s unpleasant, even when it involves our own government agencies screwing up or even worse.

AMY GOODMAN: And when is the movie coming out?

AMY GOODMAN: Well, Thom Hartmann, I want to thank you very much for being with us. Thom Hartmann is the nationally syndicated TV and radio talk show host of The Thom Hartmann Program. He’s the New York Times best-selling author of two dozen books. Today’s book, that was just published, is called The Crash of 2016: The Plot to Destroy America—and What We Can Do to Stop It. His book about the Kennedy assassination is called Legacy of Secrecy: The Long Shadow of the JFK Assassination.

And that does it for our broadcast. If you’d like to get a copy of today’s show, you can go to our website at democracynow.org. Again, we’re headed to Warsaw, Poland, at the end of this week. We’re the only global broadcast to be broadcasting daily hour throughout next week, from Warsaw, from the United [Nations] climate change summit in Poland. 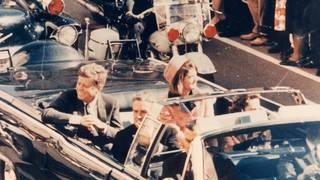