As delegates to the U.N. climate summit debate over how to meet a pledge to provide $100 billion a year in climate aid by 2020, critics note industrialized countries spend more than five times as much money on subsidizing the fossil fuel industry as they do on helping poorer countries adapt to global warming. We speak with the activists raising these concerns inside the climate talks in Warsaw, including Stephen Kretzmann, executive director of Oil Change International, which has just released the report, “Fossil Fuel Subsidies Continue to Overshadow Climate Finance.”

AMY GOODMAN: We turn right now to an action that took place just about an hour before we went to broadcast, drawing attention to how industrialized countries spend more than five times as much money on subsidizing the fossil fuel industry than on the climate fund.

STEPHEN KRETZMANN: Hi, I’m Steve Kretzmann, executive director from Oil Change International. And we’ve just heard this and seen this great skit which graphically illustrates the fact that, unfortunately, countries, rich countries here in Warsaw, are funding fossil fuel subsidies—big oil, coal and gas—five times more than they are climate finance. When you’re in a hole, you have to stop digging. And we are in a huge hole with climate. And not only are we still digging, but governments are paying the fossil fuel industry to dig for more every day.

INGRID VERNE: I’m Ingrid from Changemaker in Norway. The rich countries have promised to provide $100 billion a year by 2020, but right now we don’t know how we’re going to get those money. So we need a scaling-up plan with concrete numbers and targets for how we’re going to reach that $100 billion goal. And we need predictability, because developing countries need to know if they’re going to have money to adapt to the climate changes that are happening.

SIMON BRADSHAW: Simon Bradshaw, Oxfam International. Adaptation can mean many things. It can mean building infrastructure, seawalls, other defenses to rising seas and to other impacts. But it’s also about building the capacity within communities to deal with the changes today and tomorrow. And that’s why it’s important to invest in community-based adaptation, in strengthening governance, in amplifying the voices of vulnerable communities, so that they can hold their governments to account, and so can be fashioning solutions to work for them wherever they’re placed. Now, those solutions may be infrastructure. It may be drought-resistant crops, various climate-smart food gardens and so forth. But really it’s about building the capacity within communities to deal with those challenges, whatever climate throws at us.

AMY GOODMAN: All of this comes as richer countries here at COP 19 are negotiating over how to meet a pledge to provide $100 billion a year in climate aid by 2020. That pledge was made by Secretary of State Hillary Clinton in Copenhagen in 2009. I asked Steve Kretzmann, the executive director of Oil Change International, to elaborate on the disparity in how much money is put into fossil fuel subsidies versus the climate fund.

STEPHEN KRETZMANN: I’m Steve Kretzmann with Oil Change International. And we’re here today to point out the fact that governments have their priorities all wrong here in Warsaw. They’re still spending more money on fossil fuel subsidies, subsidizing—giving taxpayer money to big oil, coal and gas, than they are actually fighting climate change, at the end of the day. And we have a new analysis out today that shows that that’s actually a disparity of at least five to one in the wrong direction. So, we’re seeing at least $58 billion coming from rich countries going to fossil fuel industries and only $11 billion annually going to climate finance around the world.

AMY GOODMAN: How do you—can you explain the justification for this?

STEPHEN KRETZMANN: Well, you know, unfortunately, the fossil fuel industry has a very deep and powerful relationship with governments around the world. I mean, at the end of the day, they have a lot of influence, particularly in the United States, where, you know, it’s clear that they have captured one political party and really cowed the other one, so that we have a president who, on one hand, believes in an all—believed in an all-of-the-above energy strategy, and, on the other hand, says that he’s committed to fighting climate change. These two things are totally antithetical, and yet the Obama administration seems to live with this conflict all the time.

STEPHEN KRETZMANN: He has, absolutely. And he’s put—he’s put legislation in front of Congress to eliminate a small portion of the existing fossil fuel subsidies. But that would be great. Congress isn’t willing to work at it because the oil, coal and gas industry give overwhelming amounts of campaign finance to really stop any action on taking away their tax breaks in Congress.

AMY GOODMAN: How did they ever get these tax breaks, to begin with?

STEPHEN KRETZMANN: When they were, you know, young industries, people said they needed this money to actually become competitive. They obviously don’t need that anymore, but once—at the end of the day, once these things are enshrined in law, they’re very, very difficult to remove. And, in fact, we saw a huge jump in additional subsidies that came in during the Bush administration in the 2005 Energy Act, because, you know, that administration, in particular, was so close to the oil industry that they felt the need to give more of our taxpayer dollars to them.

AMY GOODMAN: And those subsidies continue.

AMY GOODMAN: So, how would the money better be spent?

STEPHEN KRETZMANN: I mean, if we agree that we’re going to fight climate change, the first thing to do is to stop funding the problem, which is funding fossil fuel subsidies. And so, we should redirect that money towards solar energy, wind power, clean energy technologies. We can also redirect it towards helping communities in the United States—on the coast of New Jersey, in Louisiana, etc.—adapt to what rising sea levels and a harsher climate are going to mean, and also communities around the world, like were just affected in the Philippines with Typhoon Haiyan. You know, we need to be able to have our taxpayer money support adaptation for these communities.

AMY GOODMAN: How does the issue of jobs fit into taking away fossil fuel subsidies and putting it into climate fund?

STEPHEN KRETZMANN: So, the oil industry and the fossil fuel industry, in general, always cries, “Oh, if you take away our money, we’re going to have to take away jobs.” That’s ridiculous. The only thing that would happen is they would perhaps have to make slightly less than astronomical profits. You know, instead of $50 billion a year, it may be $30 billion a year or something. But there’s absolutely no reason that it should lead to layoffs in the short term. But obviously there is going to have to be an economic transition, and we need to use public money to help either retrain workers and provide a safety net and actually effect this economic transition. We know what we have to do. It’s not—you know, it’s not that mysterious. We have to switch our economy to one that functions on clean energy, first and foremost. And there will be people impacted by that, but we can take care of those people with our taxpayer support, because it’s an important priority for the United States and globally.

AMY GOODMAN: Have there been any studies done about how wind and solar, how adaptation of communities against extreme weather could actually create more jobs?

STEPHEN KRETZMANN: Absolutely. I mean, generally, these industries tend to be much more labor-intensive and much less capital-intensive. The oil and gas industry is very capital-intensive and not particularly labor-intensive at the end of the day. So, you know, there are some figures that show it’s—you employ five times as many people to generate equivalent amounts of energy, right? There are—those numbers vary depending upon your assumptions, etc., but consistently they show that we can employ more people in a clean energy economy than we can in our current extractive economy.

AMY GOODMAN: How do you respond to those who say, “Your ideas are cute—solar, wind—but we’re talking about more energy needs, not less, in the United States”? How can these alternative forms of energy actually meet the need?

STEPHEN KRETZMANN: Solar and wind are the fastest-growing new sources of energy in the world and in the United States today. These are proven technologies, which are cost-competitive despite the fact that there is an overwhelmingly imbalanced playing field going towards fossil fuels. These industries are really succeeding. People are making real money, and people are, you know, enjoying real jobs in these new clean tech industries. And so, we have to stop propping up the past with these subsidies and instead move into actually facilitating the future.

AMY GOODMAN: It’s interesting that the United States gives subsidies to the fossil fuel industry. Aren’t they challenging China for subsidizing the solar industry? Can you make comparisons between China and the United States?

STEPHEN KRETZMANN: I mean, it seems that, actually, China is much more serious, when you look at the amount of money that’s going in actually funding its clean energy technology, than the United States is. And, you know, it’s a little bit sad, from a U.S. perspective, because solar technology was developed in the U.S., but it’s really been commercialized and made much more economically profitable by the Chinese, who have pumped lots of money into it to make it competitive, you know? I think it’s quite absurd that the U.S. is challenging Chinese clean energy subsidies. And—

AMY GOODMAN: How are they challenging? Where?

STEPHEN KRETZMANN: At the WTO. I’m not familiar with all the information, but it’s happening on a regular basis there. And the U.S. seems to be more interested in protecting its own fossil fuel industries than it is in actually encouraging clean energy globally.

AMY GOODMAN: That was Stephen Kretzmann, executive director of Oil Change International, here at the U.N. climate change summit in Warsaw, Poland. This is Democracy Now!, democracynow.org, The War and Peace Report. When we come back, one of the leading Philippine climate change commissioners gives yet another heart-rending speech here at the climate change talks about climate and the typhoon in the Philippines. Stay with us.

Filipina Climate Chief: “It Feels Like We Are Negotiating on Who Is To Live and Who Is To Die”

NEXTFilipina Climate Chief: “It Feels Like We Are Negotiating on Who Is To Live and Who Is To Die” 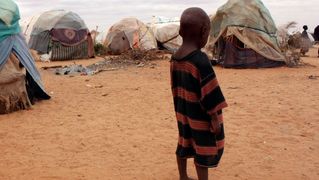