WikiLeaks founder Julian Assange addressed a major gathering of computer experts Monday at the Chaos Communication Congress in Hamburg, Germany, calling on them to join forces in resisting government intrusions on Internet freedom and privacy. We play highlights from Assange’s speech, as well as the one given by Sarah Harrison, the WikiLeaks member who accompanied Edward Snowden to Russia. We also hear from independent journalist and security expert Jacob Appelbaum, who reveals a spying tool used by the National Security Agency known as a “portable continuous wave generator.” The remote-controlled device works in tandem with tiny electronic implants to bounce invisible waves of energy off keyboards and monitors to see what is being typed. It works even if the target computer is not connected to the Internet.

StoryApr 26, 2012Targeted Hacker Jacob Appelbaum on CISPA, Surveillance and the “Militarization of Cyberspace”

AMY GOODMAN: We turn now to the Chaos Communication Congress, or CCC, in Hamburg, Germany. One of the speakers at the conference was WikiLeaks’ Sarah Harrison, who accompanied Edward Snowden to Russia and spent four months with him. Harrison addressed the audience after receiving a long standing ovation.

SARAH HARRISON: Together with the Center for Constitutional Rights, we filed a suit against the U.S. military, against the unprecedented secrecy applied to Chelsea Manning’s trial. Yet through these attacks, we have continued our publishing work. In April of this year, we launched the Public Library of US Diplomacy, the largest and most comprehensive searchable database of U.S. diplomatic cables in the world. This coincided with our release of 1.7 million U.S. cables from the Kissinger period. We launched our third Spy Files, 249 documents from 92 global intelligence contractors, exposing their technology, methods and contracts. We completed releasing the Global Intelligence Files, over five million emails from U.S. intelligence firm Stratfor, the revelations from which included documenting their spying on activists around the globe. We published the primary negotiating positions for 14 countries of the Trans-Pacific Partnership, a new international legal regime that would control 40 percent of the world’s GDP.

As well as getting Snowden asylum, we set up Mr. Snowden’s defense fund, part of a broader endeavor, the Journalistic Source Protection Defence Fund, which aims to protect and fund sources in trouble. This will be an important fund for future sources, especially when we look at the U.S. crackdown on whistleblowers like Snowden and alleged WikiLeaks source Chelsea Manning, who was sentenced this year to 35 years in prison, and another alleged WikiLeaks source, Jeremy Hammond, who was sentenced to 10 years in prison this November. These men, Snowden, Manning and Hammond, are prime examples of a politicized youth who have grown up with a free Internet and want to keep it that way. It is this class of people that we are here to discuss this evening, the powers they and we all have and can have.

JULIAN ASSANGE: Those high-tech workers, we are a particular class, and it’s time that we recognized that we are a class and looked back in history and understood that the great gains in human rights and education and so on that were gained through powerful industrial work as we formed the backbone of the economy of the 20th century, I think we have that same ability, but even more so, because of the greater interconnection that exists now, economically and politically, which is all underpinned by system administrators. And we should understand that system administrators are not just those people who administer one unique system or another; they are the people who administer systems. And the system that exists globally now is created by the interconnection of many individual systems. And we are all, or many of us, are part of administering that system, and have extraordinary power, in a way that is really an order of magnitude different to the power industrial workers had back in the 20th century.

And we can see that in the cases of the famous leaks that WikiLeaks has done or the recent Edward Snowden revelations, that it’s possible now for even a single system administrator to have a very significant change to the—or rather, apply a very significant constraint, a constructive constraint, to the behavior of these organizations, not merely wrecking or disabling them, not merely going out on strikes to change policy, but rather shifting information from an information apartheid system, which we’re developing, from those with extraordinary power and extraordinary information, into the knowledge commons, where it can be used to—not only as a disciplining force, but it can be used to construct and understand the new world that we’re entering into.

Now, Hayden, the former director of the CIA and NSA, is terrified of this. In Cypherpunks, we called for this directly last year. But to give you an interesting quote from Hayden, possibly following up on those words of mine and others: “We need to recruit from Snowden’s generation,” says Hayden. “We need to recruit from this group because they have the skills that we require. So the challenge is how to recruit this talent while also protecting ourselves from the small fraction of the population that has this romantic attachment to absolute transparency at all costs.” And that’s us, right?

So, what we need to do is spread that message and go into all those organizations—in fact, deal with them. I’m not saying don’t join the CIA. No, go and join the CIA. Go in there. Go into the ballpark and get the ball and bring it out—with the understanding, with the paranoia, that all those organizations will be infiltrated by this generation, by an ideology that is spread across the Internet. And every young person is educated on the Internet. There will be no person that has not been exposed to this ideology of transparency and understanding of wanting to keep the Internet, which we were born into, free. This is the last free generation.

The coming together of the systems of governments, the new information apartheid across the world, the linking together, is such that none of us will be able to escape it in just a decade. Our identities will be coupled to it, the information sharing such that none of us will be able to escape it. We are all becoming part of the state, whether we like it or not, so our only hope is to determine what sort of state it is that we are going to become part of. And we can do that by looking and being inspired by some of the actions that produced human rights and free education and so on, by people recognizing that they were part of the state, recognizing their own power, and taking concrete and robust action to make sure they lived in the sort of society that they wanted to, and not in a hellhole dystopia.

AMY GOODMAN: WikiLeaks founder Julian Assange addressing the Chaos Communication Congress that’s taking place in Hamburg, Germany. He, of course, was speaking from the Ecuadorean embassy in London. He fears if he steps foot outside that embassy, where he’s been for a year, that he will be arrested by British authorities, that he would be extradited to Sweden, and he most fears being extradited to the United States. 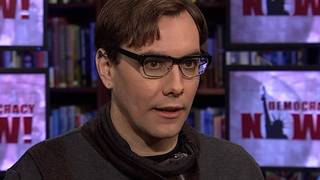 Targeted Hacker Jacob Appelbaum on CISPA, Surveillance and the “Militarization of Cyberspace”