“We Need To Push Him”: Actress Daryl Hannah Arrested While Urging Obama to Reject Keystone Pipeline

For the second time in six months, actress Daryl Hannah has been jailed for protesting the Keystone XL oil pipeline. In October, she was arrested in Texas. On Wednesday, she and 47 others were arrested outside the White House. “It’s incumbent upon us, upon citizens, to show up and stand up and take action,” Hannah says. “The polls show that the majority of people in this country are very, very concerned about the climate crisis and want action. And so, the only way that’s going to happen is if we insist upon it. President Obama again and again says, 'Push me.' Well, we need to get out there and push him.” [includes rush transcript]

AMY GOODMAN: Midnight Oil’s “Beds Are Burning.” Back in 2009, musicians and celebrities from around the world released this reworked version ahead of the U.N. climate talks in Copenhagen. The video launched TckTckTck, the Time for Climate Justice campaign. And for those of you listening on the radio, go to our website at democracynow.org to check out the music video.

Well, Daryl Hannah is an actress and activist. She was arrested last year in Texas for protesting the Keystone XL pipeline. And yesterday she joined 47 others, including Julian Bond, the former chair of the NAACP, a leading civil rights activist; Robert Kennedy Jr., the attorney; Michael Brune, the head of the Sierra Club, in getting arrested once again, this time in front of the White House.

Daryl Hannah, welcome back to Democracy Now! Why did you get arrested again over this issue?

JUAN GONZÁLEZ: And, Daryl Hannah, your rap sheet is developing, obviously, within these various protests that you’ve been involved in. But you’ve also been outspoken in terms of the influence of lobbyists on some of the key Democratic leaders, both President Obama and Hillary Clinton, as well.

DARYL HANNAH: Yeah, I mean, it’s—you know, it’s important to recognize that, you know, we no longer have—can have faith that corporations are not going to stop themselves from making record profits, obviously, so they’re not going to stop themselves. And I don’t think we can have faith that the government has the mechanism to stop these things, either, since Citizens United and since corporations can put money in the pockets of our politicians. So, I think it’s incumbent upon us, upon citizens, to show up and stand up and take action, such as the brave move that Sierra Club has stepped up to and this demonstration that’s going to happen on the 17th, and speak out and let their voices be heard. You know, the polls show that the majority of people in this country are very, very concerned about the climate crisis and want action. And so, the only way that’s going to happen is if we insist upon it. President Obama again and again says, “Push me.” Well, we need to get out there and push him and let ourselves be heard.

AMY GOODMAN: You know, I was watching the networks through last night. There was very little attention paid to this protest the day after the State of the Union address—most of the people, I assume, who got arrested, of all of you, almost 50, supporters of President Obama. So, for example, MSNBC, as I watched through the night, there was almost no mention—I saw no mention, but I, you know, didn’t see every minute of it—for hours, of this protest. Instead, the focus was on the debate between the Republicans and the Democrats: the Republicans who, they kept on saying, you know, do not believe in climate change; the Democrats, of course, who are trying to push forward on climate change. What about that issue of the pressure on President Obama, not from the Republicans, but from traditionally his supporters, who are willing to get arrested for forcing him to take a stand against the Keystone XL?

DARYL HANNAH: Well, I think it’s interesting, the coverage issue. You know, I think maybe that was just a bad timing choice to do this demonstration after the State of the Union, because a lot of the news organizations that were interested in booking some of the people who were participating in the civil disobedience had already had commitments to congressmen, etc., to have them on their shows. But nevertheless, I think that—I think that this is the time for even his supporters to stand up. President Obama is not up for re-election again, so this is the time to make him take action and be aware that his legacy is at risk here, that we need him to be a president that shows real leadership, that performs actions that are brave and not just talks about things, and use his executive power.

AMY GOODMAN: Daryl Hannah, will you be at the—in Washington on Sunday for this major rally?

DARYL HANNAH: I hope to be. I’m supposed to work on Friday, so if I get done in time, yeah.

AMY GOODMAN: Well, I want to thank you very much for joining us. Daryl Hannah is an actress and activist, previously arrested in Texas in October for protesting the Keystone XL pipeline, yesterday was arrested in Washington, D.C., among almost 50 others protesting, calling for the Obama administration not to approve the Keystone XL. They put off the decision twice. President Obama put off the decision soon after 1,200 people were arrested in front of the White House, saying he would do it after the election. And now, once again, they’re saying the announcement will be made in the spring. This is Democracy Now!, democracynow.org, The War and Peace Report. I’m Amy Goodman, with Juan González. 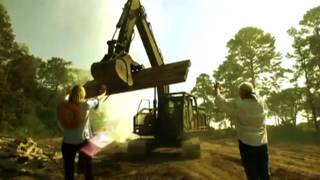