A David-versus-Goliath case heard by the Supreme Court this week pits a 75-year-old farmer from Indiana against Monsanto, the world’s largest seed company. The dispute began when soybean farmer Vernon Bowman bought and planted a mix of unmarked grain typically used for animal feed. The plants that grew turned out to contain the popular herbicide-resistant genetic trait known as Roundup Ready that Monsanto guards closely with patents. Monsanto accused Bowman of using their technology without paying for it. Their contracts with farmers give them the exclusive rights to supply the Roundup Ready soybeans. They sued Bowman for patent infringement. We discuss the case with Debbie Barker, program director of Save Our Seeds and international director of the Center for Food Safety. [includes rush transcript]

JUAN GONZÁLEZ: We end today’s show with a look at David versus Goliath, a case heard by the Supreme Court Tuesday that pitted a 75-year-old farmer from Indiana against Monsanto, the world’s largest seed company. The dispute began when soybean farmer Vernon Bowman bought and planted a mix of unmarked grain typically used for animal feed. The plants that grew turned out to contain the popular herbicide-resistant genetic trait known as Roundup Ready, that Monsanto guards closely with patents. Monsanto accused Bowman of using their technology without paying for it. Their contracts with farmers give them the exclusive rights to supply the Roundup Ready soybeans. They sued Bowman for patent infringement.

AMY GOODMAN: Well, on Wednesday, I spoke about this case, how it could impact corporate control of the world’s food supply, with Debbie Barker, program director of Save Our Seeds and international director of the Center for Food Safety. She co-authored a new report called “Seed Giants vs. U.S. Farmers.” I spoke with her, along with Nermeen Shaikh of Democracy Now! This is what she had to say.

DEBBIE BARKER: Of course, the case, it’s hard to know exactly how the Supreme Court will end up ruling, whether it be narrow or broadly. But the reason why we wrote an amicus brief and then wrote this report supporting Hugh Bowman is to point out the fact that, unfortunately, this is a microcosm of a bigger issue of seed patenting and the question of who should own the right to products of life, if you will, or living organisms. So, for example, Monsanto has already sued around—has about 144 lawsuits involving about 406 farmers and about 50-plus small farm businesses across 27 states. And they have—farmers have already paid Monsanto in these cases about $28 million. And then, of course, there are thousands of cases that are settled out of court, where Monsanto comes after farmers to investigate them for seed patent—alleged seed patent infringement. And they have had thousands of cases—our report and investigation has shown thousands of cases settled out of court in confidential arrangements. So, this has implications not only for farmers, but rural America, and, as well, as I said, the question of who should be owning seeds. And right now, a handful of corporations—say, the top three agrochemical corporations—control 53—approximately 53 percent of commercial global sale of seeds. And we think that that has broader socioeconomic issues. And that’s what this report and our amicus brief in the case of Bowman discusses.

NERMEEN SHAIKH: And, Debbie Barker, one of the lawyers for Monsanto, Seth Waxman, he said during the Supreme Court hearing, quote, “Without the ability to limit reproduction of soybeans containing this patented trait, Monsanto could not have commercialized its invention and never would have produced what is, by now, the most popular agricultural technology in America.” Could you respond to that?

DEBBIE BARKER: Well, first of all, I think, to talk about why is that the most popular agricultural product, one of the situations we have is, because of the current seed-patenting regime that gives exclusive rights to companies like Monsanto, you have a situation where, as I said, there’s a handful of companies controlling the rights to seeds and germ plasm, and this leads to, obviously, market concentration. And with that, we’ve seen an incredible increase in the price of seeds. For example, in soybean, in the last decade, there has been a 325 percent increase in seeds.

Now, what many farmers told us in our “Seed Giants” investigation report is that they’re not necessarily—I mean, they’re kind of held hostage, that not only have the seed prices gone up, but when they don’t want these kinds of seeds, and maybe they want to go back to other seeds or conventional seeds that were available before the GM soy seed, it’s not really available on the market. So, when the companies—they’ve invested a lot in the innovation or the research and development on this GE soybean, so to recoup the investment, one of the ways of doing that is kind of cornering the market or making sure that that is almost the only option available to farmers.

AMY GOODMAN: The report has these stunning figures: 86 percent of corn, 88 percent of cotton, 93 percent of soybeans farmed in the U.S. are now genetically engineered?

AMY GOODMAN: Making—so if you want non-genetically engineered crops, it is very difficult to get them here?

DEBBIE BARKER: Yes, it’s very difficult. We’ve had, you know, anecdotal stories with the farmers that we talked to that will say, “You know, when we’ve asked our seed supplier, our licensee of [inaudible], to get us just conventional seeds, and they’ll say, 'Oh, well, perhaps they're ready, but you might miss a planting season.’” And no farmer can afford to do that. So that’s the kind of situation that they’re put in.

AMY GOODMAN: Let me get your response to Monsanto’s statement about this case. David Snively—I’m not sure how you pronounce his name, might be Snively—executive vice president and general counsel for Monsanto, said the case, quote, “highlights the importance of intellectual property protection in supporting America’s continued investments in breakthrough 21st century technologies that support the increasing demands of our planet and our people.” Debbie Barker, your response?

DEBBIE BARKER: Well, a couple responses. One is, as I said, in our report, we try and show these broader socioeconomic implications. One would be this increase in the price of seeds, and we think that such an increase, if that’s the model, not only has that been devastating to many farmers in the U.S., but if we have a model in which we want to say we want to feed the planet with such crops, and it’s expensive for the farmers to buy these seeds, you extract that model or export it to developing countries, where farmers who formerly saved their own seeds and didn’t have to pay for seeds are now having to pay this huge cost for the seeds, in addition to the chemicals, the high cost of the chemicals it takes to have this combination, we feel that that’s not really the best model to go forward to feed the world.

But on top of that, we would say that, to date—and we’ve had two decades now in the U.S. of GE crops, and there have only been—there are no traits of enhanced nutrition. There are no traits for drought-resistant crops. There are—in fact, even in the case in the hearing yesterday, the attorney said, in fact, that the soybeans do not have any increased yield. So that kind of takes the steam out of—they’ve admitted that they don’t increase yields, and therefore, it’s not really a crop that could feed the world, because it doesn’t show increased yields, say, compared to a conventional or then, of course, even an organic or sustainable agroecological system.

AMY GOODMAN: Debbie Barker, program director of Save Our Seeds and international director of the Center for Food Safety, co-authored a new report called “Seed Giants vs. U.S. Farmers.” We’ll link to it on our website at democracynow.org. 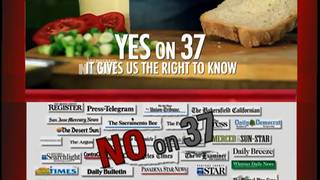