National Security Agency whistleblower Edward Snowden has been given one year temporary political asylum in Russia. Snowden has reportedly already left the Moscow airport where he has been holed up for over a month. On Wednesday, The Guardian newspaper revealed details about another secret NSA program based on leaked documents provided by Snowden. The program, XKeyscore, allows analysts to search with no prior authorization through vast databases containing emails, online chats and the browsing histories of millions of individuals giving NSA analysts real-time access to “nearly everything a typical user does on the internet.” To discuss these latest developments, we’re joined by Spencer Ackerman, national security editor at The Guardian.

AMY GOODMAN: In breaking news out of Russia, National Security Agency whistleblower Edward Snowden has been given one year temporary political asylum in Russia. Snowden has reportedly already left the Moscow airport where he’s been holed up for over a month.

On Wednesday, The Guardian newspaper revealed details about another secret NSA program called XKeyscore, based on leaked documents provided by Snowden. XKeyscore allows analysts to search, with no prior authorization, through vast databases containing emails, online chats and the browsing histories of millions of individuals. According to a slide presentation provided to The Guardian by whistleblower Edward Snowden, XKeyscore gives NSA analysts real-time access to, quote, “nearly everything a typical user does on the internet.” In its own training materials, the NSA calls XKeyscore its “widest-reaching” system for developing intelligence from the Internet. While the program is supposed to target overseas Internet users, The Guardian reports XKeyscore provides the technological capability, if not the legal authority, to target even Americans for extensive electronic surveillance without a warrant. Edward Snowden first hinted at the program during an interview with The Guardian in June.

EDWARD SNOWDEN: Any analyst at any time can target anyone, any selector anywhere. Where those communications will be picked up depends on the range of the sensor networks and the authorities that that analyst is empowered with. Not all analysts have the ability to target everything. But I, sitting at my desk, certainly had the authorities to wiretap anyone, from you or your accountant to a federal judge, to even the president, if I had a personal email.

AMY GOODMAN: The Guardian published its exposé on Wednesday morning just minutes before the Senate Intelligence Committee opened an oversight hearing on the NSA’s surveillance programs. During the hearing, NSA Deputy Director John Inglis conceded that the bulk collection of phone records of millions of Americans under Section 215 of the PATRIOT Act has been key in stopping only one terror plot, not the dozens officials had previously said.

Ahead of Wednesday’s Senate hearing, the Obama administration released three heavily censored documents related to its surveillance efforts, but the White House has refused to declassify the legal arguments underlying the dragnet or the original rulings by the surveillance court on which the released order to collect phone records was based. President Obama will be meeting with a group of lawmakers today to discuss the surveillance programs.

Meanwhile, the head of the NSA, General Keith Alexander, spoke Wednesday at the Black Hat conference, a gathering of hackers and cybersecurity professionals in Las Vegas. His speech was repeatedly interrupted by critics of the NSA’s surveillance program.

GEN. KEITH ALEXANDER: Our nation takes stopping terrorism as one of the most important things.

GEN. KEITH ALEXANDER: Exactly. And with that, when you think about it, how do we do that? Because we stand for freedom.

GEN. KEITH ALEXANDER: Not that. But I think what you’re saying is that, in these cases, what’s the decision? Where is the discussion? And what tools should we have to stop those?

JON McCOY: No, I’m saying I don’t trust you!

UNIDENTIFIED CRITIC: You lied to Congress. Why would we believe you’re not lying to us right now?

UNIDENTIFIED: Wait for the question session.

GEN. KEITH ALEXANDER: Thank you for that. But I do think this is important for us to have this discussion, because, in my opinion, what you quickly believe is that which is written in the press, without looking at the facts.

We’re joined now by two guests. Spencer Ackerman is national security editor at The Guardian. His latest piece, “US Government Declassifies Court Order on NSA Surveillance as Pressure Builds.” And Jim Bamford is with us, investigative reporter who has covered the National Security Agency for the last three decades, helped expose the NSA’s even existence in the 1980s. His most recent book on the agency is called The Shadow Factory: The Ultra-Secret NSA from 9/11 to the Eavesdropping on America. And his most recent piece is for The New York Review of Books is called “They Know Much More Than You Think.”

I wanted to begin with Spencer Ackerman with the news that right now Edward Snowden has left the airport in Moscow and has been granted temporary asylum in Russia. The significance of this, Spencer?

SPENCER ACKERMAN: It’s going to be fascinating to see how U.S. foreign policy and the fabled reset to Russia quickly becomes subordinated to the furious demands by the Obama administration for Russia to turn over Edward Snowden. And it also creates some tension. Russia is an authoritarian society. This is something that really can’t be denied. And now you see, for what one could probably concede are cynical purposes, they’re using Snowden as a chit against the United States.

AMY GOODMAN: So, Spencer Ackerman, can you start off by talking about what it was—I mean, obviously, Edward Snowden has had enormous impact in this country, and the reverberations are being felt around the world. One hearing after another now, he is being—and polls shows that most people in this country consider him a whistleblower, not a traitor. I wanted to start by your focusing on the Obama administration’s declassification of documents yesterday and the significance of this.

SPENCER ACKERMAN: It’s tremendous. Two of the documents were fabled instances of oversight that the NSA and the Obama administration have cited to show that Congress has been fully on board with these programs from the start. When you look at what members of Congress who weren’t on the secret intelligence committees in the House and Senate actually saw in these documents, it immediately starts off by talking about the threat of terrorism, the legacy of 9/11, and then describing that there are some bulk collection programs of phone records. And they never say in the documents that these are all Americans’ phone records, that these collection programs occur without any suspicion of any American to any act of terrorism or espionage, which is what the underlying statute authorizing them says. They’re four pages long. The Obama administration and the NSA issued them right before key surveillance votes. And this is what they now turn around and say amounted to congressional oversight and knowledge of these programs.

AMY GOODMAN: Now, this were documents that Edward Snowden had already released, is that right?

SPENCER ACKERMAN: Well, no. These were some different—two of the documents were things that the Obama administration used as sort of summaries of the programs, not in detail, for Congress. And then, one of them was a really extraordinary document from the FISA court that complemented the first document from Snowden that we published back in June disclosing the secret order on Verizon to turn over all of their subscribers’ phone records. Unlike that document, this one goes into a bit more detail about the rules under which the NSA can access the phone records that it collects from millions of Americans, particularly cases where, despite what the Obama administration and the NSA have said, low-level technical officials, like Snowden, for instance, can actually access the databases without the fabled reasonable, articulable suspicion of connections to terrorism or espionage. They just can’t turn them into intelligence reports. And it also disclosed that there are algorithmic searches that the NSA has built. And I’m sure Mr. Bamford, who knows more about this than most of us will ever know, and probably forgotten more about this than ever know, can explain in more detail. But in those cases, searches of the database do not occur when there is reasonable, articulable suspicion; they occur when an algorithm determines that a proper ping should then go to an analyst.

AMY GOODMAN: We’re going to go to break and come back. We’ll be continuing with Spencer Ackerman of The Guardian and Jim Bamford, who has covered the National Security Agency perhaps more than anyone in this country. Stay with us. 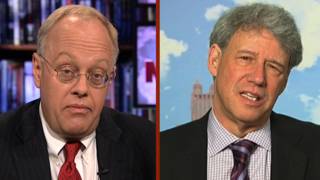