Bradley Manning apologized for leaking classified documents to WikiLeaks during his sentencing hearing on Wednesday. Manning faces up to 90 years in prison after being convicted last month on 20 counts. He said: “I am sorry for the unintended consequences of my actions. When I made these decisions, I believed I was going to help people, not hurt people.” Manning added, “I understood what I was doing and the decisions I made. However, I did not truly appreciate the broader effects of my actions. Those effects are clearer to me now through both self-reflection during my confinement in its various forms and through the merits and sentencing testimony that I have seen here.” An Army psychologist who analyzed Manning while he served in Iraq also testified Wednesday, along with a clinical psychologist who spent 21 hours examining Manning after his arrest. Manning’s sister and aunt also both took the stand to deliver emotional testimony about his childhood. We speak to reporter Alexa O’Brien, who was in the courtroom and has closely covered the Manning trial. “Bradley Manning is more of a moral character than he is a political one,” O’Brien says.

NERMEEN SHAIKH: We turn now to the trial of Army Private Bradley Manning, as the sentencing phase winds down with a decision expected as soon as next week. On Wednesday, the 25-year-old whistleblower, who faces up to 90 years in prison for leaking hundreds of thousands of documents to WikiLeaks, took the stand for about three minutes. Manning told Judge Colonel Denise Lind, quote, “I am sorry for the unintended consequences of my actions. When I made these decisions I believed I was going to help people, not hurt people. The last few years have been a learning experience. I look back at my decisions and wonder, 'How on earth could I, a junior analyst, possibly believe I could change the world for the better over the decisions of those with the proper authority?'” Manning added, quote, “I understood what I was doing and the decisions I made. However, I did not truly appreciate the broader effects of my actions. Those effects are clearer to me now through both self-reflection during my confinement in its various forms and through the merits and sentencing testimony that I have seen here.”

AMY GOODMAN: An Army psychologist who analyzed Bradley Manning while he served in Iraq also testified Wednesday, along with a clinical psychologist who spent 21 hours examining Manning after his arrest. Manning’s sister, Casey Major, and his aunt, Debra Van Alstyne, took the stand to deliver emotional testimony about Manning’s difficult childhood. All of this comes as several other defense witnesses took the stand this week, after the government wrapped up its witnesses Friday.

For more, we’re joined by Alexa O’Brien in Washington, D.C. She’s been attending the Manning trial daily since it began at Fort Meade, and will return there Friday when the court-martial is set to reconvene and the government may make a rebuttal.

Alexa, we welcome you back to Democracy Now! It’s good to see you in a studio. We usually see you in a car outside the trial. Can you talk about Bradley Manning’s apology?

ALEXA O’BRIEN: Yeah. You know, one of the most important things that I want to say today is the fact that his statement yesterday is completely consistent with the statements that he made in court back in February with that providence statement where he pled to 10 lesser included offenses. And, you know, he pled to service discrediting, and he told the judge back in February that he didn’t have the authority and that—and he knew that what he had done was wrong. He also said that he could understand how his actions harmed perceptions and feelings about the United States not being able to handle information securely and how that might affect the United States in its relationships globally. So, I don’t think that his apology is in any way contradicting the last, actually, 19 months in court.

ALEXA O’BRIEN: Well, as you know, in the merits phase of this trial, Manning was convicted on probable harm. So, here—you know, and motive and actually actual damage was all relegated to sentencing. So, here we’re in the sentencing phase, and we knew that Manning was going to talk about his motive. And what we had yesterday was a clinical psychologist and a forensic psychiatrist, who explained to the court mental health issues as they relate to legal issues, talk about Manning’s good-faith motive.

Now, of course, it didn’t come in the package that people expected it to come in. It actually came in a very sort of—I would actually characterize it as an earnest and sincere package. People have to understand something: Bradley Manning is more of a moral character than he is a political one. Why are people so moved by Bradley Manning? Why do people say, “I am Bradley Manning?” Because his acts were fundamentally an act of conscience. And I think that very much—the way in which he’s presented himself in court has always been deferential to authority, has always been, in a certain sense, respectful, very neutral. He’s actually even instructed his attorney to only speak in text-based documents with the press, in a very accurate way, and to get right to the point. And I think that in Bradley Manning doing that and in taking even the statement of apologizing to the U.S. government, what he does is actually show, in stark relief, the prejudice of the U.S. government and their prosecution towards him, how overbearing they’ve been, how hysterical they’ve been, because Bradley Manning has been nothing of the sort.

But Bradley Manning does have a complex personality. I mean, he actually has a very simple personality, but he has a complex history, meaning you can’t package it and sell it to the media and everybody loves it. You know, he has gender identity disorder, and he had a very complicated relationship—interpersonal relationship. He was very young. And I think also he did lack, in a certain sense, some discrimination to even protect himself from the might of the U.S. government when it came to these leaks. You know, he was really actually completely wide open to be abused by the press, as well as abused by the U.S. government. So, it’s very much in line with, I think, what’s been a really actually successful defense strategy on Coombs’s part, is to lay it all out there and show how it all fits together.

AMY GOODMAN: We have this cross-dressing photo that Bradley Manning sent his sergeant. And if you could talk about the significance of this. It’s something that he also alludes to in his own statement, when he said, “I was dealing with a lot of issues, issues that are ongoing and continue to affect me.” He wrote in the email to the officer, “This is my problem. I’ve had signs of it for a very long time. It’s caused problems within my family. I thought a career in the military would get rid of it. It’s not something I seek out for attention, and I’ve been trying very, very hard to get rid of it by placing myself in situations where it would be impossible. But, it’s not going away; it’s haunting me more and more as I get older.” If you could comment on the significance of this, as the sentencing phase of the trial is wrapping up, Alexa?

ALEXA O’BRIEN: Absolutely. I mean, I think fundamentally what we need to understand is when Bradley Manning’s forensic psychiatrist and clinical psychologist talked about his gender identity issues in court yesterday in relations to the leak, they didn’t talk about it in terms of as a pathology. They talked about it in the fact that the two occurrences were happening at the same time. The largest leak—the first large leak that Manning did was in January 2010, and it was around the time, on leave back in the United States, where he started to actually dress as a woman. And so, Bradley Manning’s personal truth and his—also his acts of conscience of leaking these large data sets all come from the same—

ALEXA O’BRIEN: —all come from the same thread.

AMY GOODMAN: Well, I want to thank you very much for being with us. Of course, we’ll continue to follow this trial, continues on Friday.

Facing Rest of Life Behind Bars, Will Bradley Manning’s Sentencing Weigh Lack of Harm to U.S.? 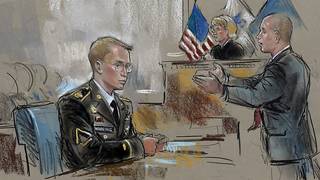 Facing Rest of Life Behind Bars, Will Bradley Manning’s Sentencing Weigh Lack of Harm to U.S.?