Iran’s new president, Hassan Rouhani, was sworn in on Sunday, replacing outgoing President Mahmoud Ahmadinejad. In what analysts termed a “conciliatory address,” Rouhani called for engaging with the United States and the lifting of international sanctions. Three days before he was inaugurated, the U.S. House passed its harshest sanctions yet on Iran, focusing on the country’s oil exports. We speak to Trita Parsi, founder and president of the National Iranian American Council. “For the U.S. Congress to pass sanctions three days before the inauguration of the new president — a president that has engaged successfully in diplomacy in the past, who has given the world some hope … only indicates that there isn’t a clear interest in the U.S. Congress for a resolution, but rather a clear interest for going towards a confrontation,” Parsi says.

AMY GOODMAN: We turn now to Iran, where the country’s new president, Hassan Rouhani, was sworn in Sunday, replacing the outgoing President Mahmoud Ahmadinejad. Rouhani signaled the possibility of talks to resolve disputes over the country’s nuclear program. He has also called for the lifting of international sanctions.

PRESIDENT HASSAN ROUHANI: [translated] Interactions based on equal footing and cooperation will be the basis of our relations with other countries. On this basis, proportionate to the behavior and approach of the other side, in view of improving and promoting future ties, we will ascertain our next step. So I will say this: If you want the right response, don’t speak with Iran in the language of sanctions; speak in the language of respect.

To talk more about the implications of Rouhani’s presidency, we’re going to Washington, D.C., to Trita Parsi, founder and president of the National Iranian American Council, author of several books, including A Single Roll of the Dice: Obama’s Diplomacy with Iran.

TRITA PARSI: Thank you for having me.

AMY GOODMAN: First, tell us who the new president of Iran is.

TRITA PARSI: Well, he is definitely an insider of the system in the Islamic republic. He is not a reformist, that has been reported in some places, but rather more of a centrist, but enjoys very good relations with most of the factions in the Iranian political system. But perhaps most importantly, he is known to his friends as the sheikh of diplomacy, because he has led so many of the negotiations that Iran has been engaged in. And according to the former French ambassador to Tehran, François Nicoullaud, he believes that Rouhani was essential in convincing the supreme leader, Ayatollah Khamenei, to end some of the military dimensions of the Iranian nuclear program back in 2003 when the Europeans were negotiating with Rouhani.

AMY GOODMAN: You know, just before the inauguration this weekend, the U.S. House of Representatives passed its harshest sanctions yet on Iran, focusing on the country’s oil exports. What’s the significance of this?

TRITA PARSI: Well, the significance of this, I think, is that it shows that there is a significant difference between the approach of the Obama administration and the U.S. Congress. Hard-liners on both sides, both in Tehran and in Washington, have had too easy of a time to scuttle deals and sour opportunities for diplomacy between the two countries. And for the U.S. Congress to pass sanctions three days before the inauguration of the new president, a president that has engaged successfully in diplomacy in the past, who has given the world some hope that perhaps there can be a resolution to the nuclear program, only indicates that there isn’t a clear interest in the U.S. Congress for a resolution, but rather a clear interest for going towards a confrontation.

AMY GOODMAN: What does this mean for the relationship between Iran, Israel and the United States, Trita, the new president?

TRITA PARSI: Well, what it means for the United States and Iran, if we take that first, is that at the end of the day, if real negotiations end up taking place—and I think there is an interest in the Obama administration’s side to do so—we have to understand that there’s going to be a significant confrontation at some point, most likely, between the Congress and the president as to whether actually deliver anything in the negotiations, because the question that the U.S. is asking, legitimately, validly, about the new president in Iran is whether he actually is capable of delivering. But what we tend to forget is that the Iranians ask the exact same question of President Obama—Is he capable of delivering?—mindful of the fact that in the midst of negotiations Congress is never-ending in its strive for imposing new sanctions that actually undermine the chances of diplomacy.

AMY GOODMAN: And the relationship with Israel, what this new president means?

TRITA PARSI: With Israel is going to be very interesting. We saw this past weekend that there were mistranslation by the Iranian media saying that Rouhani has said something along the lines that Israel is a wound that needs to be removed, whereas in reality he didn’t do so at all. The tape later on emerged—Rouhani himself tweeted the tape that showed that what he was referring to was the occupation of Palestinian territories is a wound, a statement that I believe a lot of Israelis would agree with, as well—and ended up becoming somewhat embarrassing, because the Israeli prime minister, Benjamin Netanyahu, went out very quickly and pointed to the mistranslation as evidence that there is no difference between Rouhani and Ahmadinejad, and cautioning the world not to have any illusions about dealing with Rouhani. And then it of course turned out that he had not said that at all.

But, in fact, the language coming out of Rouhani in regards to Israel is remarkably moderate compared to what was coming out of Ahmadinejad. And I think when you take a look at some of the statements that Rouhani has said on this issue, you get a very clear picture that he tends to be along those within the Iranian political system who favors the idea of really lowering the rhetoric vis-à-vis Israel, not getting engaged or entangled directly in a confrontation with the Israelis, retaining support for Palestinians but not being a front-line state vis-à-vis Israel. And that’s a remarkable shift compared to what we’ve seen in the last couple years with someone like Ahmadinejad, who believed that it was a value, a strategic value, for Iran to constantly escalate matters vis-à-vis Israel.

AMY GOODMAN: I want to thank you, Trita Parsi, for being with us, founder and president of the National Iranian American Council, author of a number of books, including Treacherous Alliance: The Secret Dealings of Iran, Israel, and the United States. His new book, A Single Roll of the Dice: Obama’s Diplomacy with Iran. 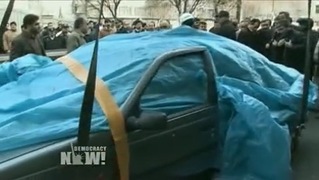