How to Buy a City: Chevron Spends $3 Million on Local California Election to Oust Refinery Critics

The oil giant Chevron is being accused of attempting to buy the city government of Richmond, California. The company has spent more than $3 million to back a slate of pro-Chevron candidates for mayor and city council ahead of Tuesday’s election. According to a report in the Los Angeles Times, Chevron has paid for TV attack ads, purchased space on virtually every billboard in town, funded a flood of mailers and financed a fake “news” website run by a Chevron employee. The move comes two years after a massive fire at Chevron’s oil refinery in Richmond sent 15,000 residents to the hospital. It was the third refinery fire since 1989 in the city. The city of Richmond responded to the latest fire by suing Chevron, accusing officials of placing profits and executive pay over public safety. We speak to one of the politicians being targeted, outgoing Mayor Gayle McLaughlin. She was elected mayor of Richmond in 2006, becoming the first Green Party official to represent a city of more than 100,000. Due to mayoral term limits, McLaughlin is now running for Richmond City Council.

JUAN GONZÁLEZ: We turn now to Richmond, California, where the oil giant Chevron is being accused of attempting to buy the city government. The company has spent more than $3 million to back a slate of pro-Chevron candidates for mayor and city council ahead of Tuesday’s election. According to a report in the Los Angeles Times, Chevron has paid for TV attack ads, purchased space on virtually every billboard in town, funded a flood of mailers, and financed a fake news website run by a Chevron employee.

The move comes two years after a massive fire at Chevron’s oil refinery in Richmond sent 15,000 residents to the hospital. It was the third refinery fire since 1989 in that city. The city of Richmond responded to the latest fire by suing Chevron, accusing officials of placing profits and executive pay over public safety. Now Chevron is attempting to defeat some of its critics in city government. Here is one recent political ad paid for by Chevron.

AMY GOODMAN: An ad by Chevron’s campaign committee, Moving Forward, targeting Gayle McLaughlin. In 2006, she was elected mayor of Richmond, becoming the first Green Party official to represent a city of more than 100,000. She is now running for City Council. She was not allowed to run for a third term as mayor due to term limits. Richmond Mayor Gayle McLaughlin now joins us from San Francisco.

Welcome back to Democracy Now! Can you please explain this for a global audience that might not understand what is going on in Richmond right now, the extent to which Chevron is a player in your municipal elections?

MAYOR GAYLE McLAUGHLIN: Thank you, Amy. It’s a pleasure to be here.

Yes, what’s happening in Richmond now is that we have made remarkable—a remarkable transformation over the past 10 years since I’ve been in office, with other progressive electives and a progressive community. Previous to that, over the past hundred years, we were known as a company town, with Chevron having control of the City Council, having the City Council bought out, in their pockets. We had among the highest rates in the nation of violence. We were known for widespread corruption. You know, Richmond had the refinery, with a situation of allowing it to continue to pollute, without the refinery paying its fair share of taxes, without hiring locally, without upgrading the refinery in a responsible way in terms of having safety for our residents. In fact, they have thousands of clamps holding corroded pipes together. And that’s what led to the fire of 2012.

AMY GOODMAN: And the fire and the extent of the damage caused by the fire?

MAYOR GAYLE McLAUGHLIN: —we formed a progressive alliance, and that RPA, Richmond Progressive Alliance, ran people for elected office. We won five local elections, including my mayoral seat. And we set about making the people’s priorities the focus of our work as elected officials.

And that has led to many, many gains. We won a $114 million tax settlement with Chevron. We’ve renovated our parks, many, many urban renewal projects. And we’ve reduced our crime dramatically, a 70 percent reduction in homicides. We are continuing to put forward sustainable projects—number one in the Bay Area for solar installed per capita. So, we’re spiraling up and reversing that downward spiral. And Chevron feels very threatened by that. They want to stop us as progressives. They want to continue and get and regain the City Council in their pockets. And so, we’re standing tall and making it clear that we’re a community that defines its own destiny and will continue to do so.

JUAN GONZÁLEZ: Well, Mayor McLaughlin, I want to read from a statement Chevron made to MSNBC in response to reports of it spending $3 million in local elections this year. Quote, “The amount of money we spend to inform voters must be viewed in the context of the more than $500 million in local taxes, social investment and spending on local vendors from Chevron over the past five years, and our $90 million social and environmental commitment to the city that will follow once our $1 billion refinery modernization is allowed to proceed.” Your response?

MAYOR GAYLE McLAUGHLIN: Yes, you know, yeah, sure, Chevron does some good things in the city of Richmond, but it comes at a price. First and foremost, they require all the money that they give to nonprofits to come with this requirement that these nonprofits utilize Chevron’s logo in their press releases, and they have press conferences where Chevron gets to do its PR campaign. So it comes at a price. Yes, we think those are good projects that they have contributed to, but it is no excuse for one domineering company to try and buy a city’s election.

JUAN GONZÁLEZ: And what about the fire that led to your council and your government seeking redress from Chevron? Could you talk about the impact on your community?

MAYOR GAYLE McLAUGHLIN: Yes, the 2012 horrific fire caused great damage to our community. It was a situation where 15,000 people went to local hospitals for respiratory ailments. We had damages to our local economy in terms of our property values were lowered, and there was a slowdown in attraction of new businesses to Richmond. So we feel that there was, you know, a huge trauma and a huge impact on the health and the economic future of Richmond.

So we are taking them to court. We have a lawsuit. It’s the first-ever lawsuit that the city of Richmond has waged against Chevron. And we think we deserve a City Council that will stand strong and not drop this lawsuit. If Chevron-friendly candidates get into the City Council, we fear that’s exactly what will happen, the lawsuit will be dropped, or a very weak settlement will come about. We want to stand strong and get the kind of compensation that the community deserves. And we want to make it clear that Chevron’s corporate culture must change, that they must put the health and well-being of our community before their corporate profits.

AMY GOODMAN: Mayor, can you talk about the Richmond Standard website, which describes itself as a home of, quote, “community-driven news,” but it is actually funded entirely by Chevron?

MAYOR GAYLE McLAUGHLIN: Yes, the Richmond Standard website tries to promote itself as a news website, but in fact it’s a public relations—Chevron public relations website. All the articles in there are Chevron-friendly articles. They’re articles that promote Chevron’s agenda. It is not anywhere near even a mainstream news service that pretends to be somewhat neutral. It is clearly a Chevron PR website.

AMY GOODMAN: Well, I want to thank you very much for being with us. One of the tabs says “Chevron Speaks” on that website. Mayor Gayle McLaughlin, mayor of Richmond, the Green mayor of the—she is the mayor of the largest—it’s the largest city, Richmond, to have a Green mayor. Her term is ending. She’s term-limited out, and she’s now running for the Richmond City Council. We’re going to continue with Green Party politics in a moment here in New York. Stay with us. 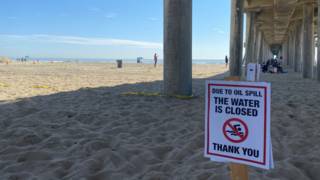