A historic number of marijuana legalization measures were on the ballot Tuesday, and most of them passed. Voters in Oregon and Alaska joined Colorado and Washington to make pot available for adults to buy in retail shops, while voters in the District of Columbia approved an initiative that makes it legal for adults to possess two ounces of marijuana and grow up to six marijuana plants in their home. One medical marijuana amendment narrowly lost in Florida, while another in Guam won by 56 percent, making it the first U.S. territory to approve such a law. Meanwhile, California overwhelmingly voted to change six low-level, nonviolent offenses, including simple drug possession, from felonies to misdemeanors. We speak with Ethan Nadelmann, founder and executive director of the Drug Policy Alliance, whose lobbying arm helped draft and support many of Tuesday’s successful measures.

NERMEEN SHAIKH: We end our show looking at the wave of drug policy reform measures that passed Tuesday. Voters in Oregon and Alaska joined Colorado and Washington in making pot available for adults to buy in retail shops. And voters in the District of Columbia approved an initiative that makes it legal for adults to possess two ounces of marijuana and to grow up to six marijuana plants in their home. One medical marijuana amendment narrowly lost in Florida, while another in Guam won by 56 percent, making it the first U.S. territory to approve such a law.

AMY GOODMAN: Meanwhile, California overwhelmingly voted to change six low-level, nonviolent offenses, including simple drug possession, from felonies to misdemeanors. And after a two-year campaign in New Jersey, voters approved Public Question No. 1, which allows legislation to go into effect that will reduce pretrial detention for low-risk offenders. A report by the Drug Policy Alliance found nearly three-quarters of people in New Jersey jails are awaiting trial rather than serving a sentence, often for more than 10 months. Nearly 40 percent have the option to post bail but can’t afford to do it.

For more, we’re joined by Ethan Nadelmann, founder and executive director of the Drug Policy Alliance. Their lobbying arm helped draft and support many of these measures.

Ethan, welcome back to Democracy Now! Just why don’t you lay out what happened in these midterm elections?

ETHAN NADELMANN: Yeah, I mean, mostly we had initially thought that we’d wait until 2016 to try to move forward with the other marijuana legalization initiatives, because typically young people are so much less likely to vote in a non-presidential-election year. But we decided, together with the local activists, to roll the dice. And I’ll tell you, Oregon, I think it won just about as big as Colorado and Washington did two years ago. Alaska is the first red state to endorse marijuana legalization. D.C. was a 70 percent vote in favor and the first marijuana campaign that was really framed in racial justice terms and that focused on the racial disproportionality of marijuana arrests. So it was really, I think, an incredible endorsement of what Colorado and Washington did two years ago, and it really set the stage nicely for what’s going to happen two years from now, when you’ll see a much bigger wave of marijuana legalization initiatives across the country

NERMEEN SHAIKH: Where do you anticipate in—

ETHAN NADELMANN: I should also—

ETHAN NADELMANN: Yeah, I was just going to say, and on the medical marijuana, you know, Guam, funny that it happened in Guam, but that’s a fairly conservative political jurisdiction, a large U.S. military presence. So that was significant. And in Florida, it technically lost, because Florida requires 60 percent of the vote to win a ballot initiative, but 57 to 58 of the electorate in Florida endorsed medical marijuana. So, it may have lost in Florida, but nationally speaking, that huge majority is going to resonate throughout the South and on Capitol Hill. So we really do see a transformation in public sentiment on these issues. And those reforms, linked with the other changes in California and New Jersey, suggest that increasingly the American public is ready to end marijuana prohibition, to tax and regulate this stuff. And on the criminal justice side, it suggests that, you know, a significant majority of Americans now say, “Let’s roll back the prison populations. You know, let’s push back the power of the prison-industrial complex.” I think the wind’s really at our backs right now on these issues.

NERMEEN SHAIKH: And, Ethan Nadelmann, so where do you see this going in 2016?

ETHAN NADELMANN: Well, I assume that California is going to be the anchor of the marijuana legalization effort. We’re already making plans, talking with allies and activists and others there, elected officials. But I’d keep my eye—I think that Maine and Nevada are very likely to have initiatives on the ballot in 2016. I’d say that Massachusetts and Arizona have a decent shot. And since a lot of times the initiative is taken not by national organizations like mine, but by local organizations and local activists, who then reach out to us seeking our support, I’d say you never know where else it’s going to pop up. As for medical marijuana, I’d keep my eye probably on Arkansas, Ohio. They’re among the few remaining states that have not yet legalized medical marijuana and that also have a ballot initiative process.

AMY GOODMAN: And the whole issue of both decriminalization of marijuana, medical marijuana, and then these drug sentences, if you could talk about that, and the drug war, what it means for U.S. and Mexico? We’re speaking to you in Mexico right now.

ETHAN NADELMANN: Yeah, no, I’m down here at TED-like festival, Ciudad de las Ideas, in Puebla, Mexico. I think there’s two major implications outside the United States. The first one is that when you’re down here in Mexico, the previous president, Calderón, oversaw this massive and disastrous war on drugs. But to his credit, when he had a chance to stir up the broader debate and raise questions about the failures of prohibition, he did so. The current president, Peña Nieto, has really shied away from this issue. And what I’m told by many people who know him personally in Mexico is the only thing forcing him to think about this issue and the only thing that will stir up the debate within Mexico is for California to legalize marijuana. You know, Washington and Colorado raised eyebrows. Oregon and Alaska are raising more eyebrows. But California is sort of the big chinchilla as far as the Mexican debate is concerned, because at that point it becomes sort of absurd for Mexico to continue with a failed prohibitionist policy on marijuana, while meanwhile in California they’re taxing and regulating it.

AMY GOODMAN: Ethan Nadelmann, we want to thank you for being with us, founder and executive director of the Drug Policy Alliance.

I’m heading to Washington, D.C., today. I’ll be speaking at George Mason University at the HUB at 2:00 p.m., and on Sunday in Princeton, New Jersey at Nassau Presbyterian Church at 1:30. Hope to see folks there. Go to our website, democracynow.org. 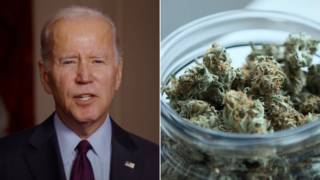