The Root is Racism in America: Ferguson Activist Speaks Out on Police Abuses After Meeting Obama

One week after the grand jury decision in the Michael Brown case, President Obama has given his first major policy response to the protests from Ferguson and beyond over racial profiling and police brutality. At a meeting with activists and officials from around the country, Obama unveiled a process to address what he called “simmering distrust.” The administration’s response comes as protests continue nationwide over the non-indictment of former officer Darren Wilson over killing Brown. On Monday, demonstrators walked out of workplaces and classrooms in some 30 cities with their hands raised, the symbol of Brown’s death and the movement that has emerged since. As the “Hands Up Walk Out” took place, some of the movement’s key leaders were not out in the streets but inside the White House. Obama’s guests included seven young activists who have helped organize the protests in Ferguson and in other communities of color. We are joined by one of those activists: Ashley Yates, an activist, poet and artist who is co-creator of Millennial Activists United. “While that is a step towards ending this real problem,” Yates says of Obama’s reforms, “the real root of it has to be addressed. And the real root of it is racism in America, the anti-black sentiments that exist. Until we begin to address that, we really can’t have any real change — all we have are these small steps towards justice. We need leaps and bounds.”

AARON MATÉ: One week after the grand jury decision in the Michael Brown case, President Obama has given his first major policy response to the protests from Ferguson and beyond over racial profiling and police brutality. At a meeting with activists and officials from around the country, President Obama unveiled a process to address what he called “simmering distrust.”

PRESIDENT BARACK OBAMA: Ferguson laid bare a problem that is not unique to St. Louis or that area and is not unique to our time. And that is a simmering distrust that exists between too many police departments and too many communities of color, the sense that in a country where one of our basic principles, perhaps the most important principle, is equality under the law, that too many individuals, particularly young people of color, do not feel as if they are being treated fairly.

AARON MATÉ: On the policy front, President Obama announced a new task force to come up with concrete steps for building public trust in police forces nationwide. Obama announced a $263 million community policing initiative, which includes $75 million for body cameras to around 50,000 police officers. Obama also announced an executive order that will tighten rules on the provision of military-grade equipment and weapons to local police forces, such as those used in the crackdown on the Ferguson protests. But in a rejection of activists’ demands, Obama vowed to leave the transfers mostly intact.

ATTORNEY GENERAL ERIC HOLDER: In the coming days, I will announce updated Justice Department guidance regarding profiling by federal law enforcement. This will institute rigorous new standards and robust safeguards to help end racial profiling once and for all. This new guidance will codify our commitment to the very highest standards of fair and effective policing.

AARON MATÉ: The new guidelines will not apply to state or local police agencies, such as in Ferguson, but, Holder said, they will help set an example. The administration’s response comes as protests continue nationwide over the grand jury’s decision not to charge Officer Darren Wilson for the killing of Michael Brown. On Monday, demonstrators walked out of workplaces and classrooms in over 30 cities with their hands raised—the symbol of Michael Brown’s death and the movement that’s emerged since. In Washington, a group of protesters held a “die-in” at the Justice Department, laying their bodies on the ground.

AMY GOODMAN: Continuing tactics that sprouted up last week, demonstrators blocked roads in D.C. and other cities, leading to arrests. As the “Hands Up Walkout” took place nationwide, some of the movement’s key leaders were not out in the streets but inside the White House. President Obama’s guests on Monday included seven young activists who have helped organize the protests in Ferguson and other communities of color.

One of those activists joins us now from Washington, D.C. Ashley Yates is an activist, poet and artist raised in Florissant, Missouri, a member and co-creator of Millennial Activists United and among the group of activists who met with President Obama at the White House on Monday.

Ashley, welcome back to Democracy Now! Can you talk about what happened at that meeting?

ASHLEY YATES: What happened at the meeting, Amy—thanks for having me once again. What happened at the meeting was very frank conversation from young activists such as myself who have been on the ground—four of us from Ferguson, three of us from around the nation, New York and Miami. And we just had really frank conversation about what’s been happening on the ground in Ferguson and around the nation, in general, and our experience about being black and brown in America and what that really looks like on a day-to-day basis in real time. The president was very receptive and was open and willing to hear our experiences and really get that viewpoint from the other side.

AMY GOODMAN: What did you tell the president, Ashley?

ASHLEY YATES: I told the president, myself, the reason that I know that this movement has to be maintained. I gave him a very personal story about why I continue to do this work, why I’m so committed to this work. My family is a large part of that—in particular, one of my younger cousins, who is a very, very fast runner and loves to run everywhere. And I looked the president right in his eye and said that I do this because I want to make sure that, unlike Tamir Rice and unlike Trayvon Martin and unlike Mike Brown, my little cousin can make it home safely.

AARON MATÉ: Ashley, what were the policy prescriptions that you offered to the White House on Monday, and what’s your response to those that they announced—the task force, the tightening slightly of the rules for giving military equipment to police forces, and the body cameras to police?

ASHLEY YATES: Well, the steps that they introduced yesterday are just that: They’re steps, right? They have to lead to something. So, we laid on the table what we’ve said from day one, that 1033, as a program, needs to be abolished. There is no reason that our local law enforcement should have military weapons, and especially in the way in which they’ve been using them. They were given those weapons in order to fight terrorism, but they are the ones enacting terrorism upon our communities; therefore, they have proven that that program is not effective. And not only is it not effective, it’s being used to oppress American citizens, so it needs to be stripped away.

So, the step that they took yesterday to actually monitor the program—which should have been done in the first place, right?—but to actually monitor it, that’s a step. We do have to have some accountability as to how these weapons are being used on our American citizens, but we’ve all seen it. We saw it for the last 115 days in Ferguson. So, to me, that monitoring has been occurring for 115 days, so now we have to see some accountability, and we need to see those stripped away. So that is a step towards progress, but we need to see more, and that’s why we continue. This movement doesn’t stop.

The body cameras? Once again, a step. But cameras didn’t save Tamir Rice. Cameras didn’t save John Crawford. They didn’t make sure that John Crawford saw justice. So, we know that while that is a step towards ending this real problem, the real root of it has to be addressed. And the real root of it is racism in America, the anti-black sentiments that exist. And we have to have a cultural shift. It’s the reason why Darren Wilson is able to get in front of a grand jury and say that he saw a young black boy as a demon and people can accept that. We have to address why that is a reality in our community. And until we begin to address that, we really can’t have any real change, and all we have is these small steps towards justice, but we need leaps and bounds.

AMY GOODMAN: Ashley, your response to the grand jury decision and to Darren Wilson resigning from the Ferguson police force?

ASHLEY YATES: Darren Wilson should not have been able to resign. He should have been fired over a hundred days ago. Also, he is resigning a much richer man. It is profitable to kill a black boy. Not only is it profitable, but you get away scot-free, as we saw with the grand jury’s decision to not indict him. It’s absolutely heartbreaking, and that’s why we continue to do this work, because, like we have said time and time again—

AMY GOODMAN: Explain what you mean by he retired—he resigns as a much richer man.

ASHLEY YATES: I think it’s pretty public knowledge that he—there were several people who set up a GoFundMe for him, which is a reason why I don’t support that site. They set up a GoFundMe. He raised over half a million dollars. And there is also speculation out there that the interview he did, he also received some incentive for. But we definitely know that there is money being put into his pocket from several different places, and the only reason is because people are supporting him throughout this. The only thing we know about him is that he killed a black boy. He has been scrubbed clean. Meanwhile, Mike Brown has been demonized in the media, and they’ve done everything they can to dehumanize him and defame his character. So, like I said, it’s absolutely heartbreaking that this can occur in America. It’s absolutely heartbreaking that we didn’t see justice in this case. It’s absolutely heartbreaking that I had to sit in front of Lesley McSpadden and watch her break down because she had an expectation that the American justice system would work for her family, and it didn’t. So, we continue to do this work so we don’t have to see another family go through that.

AMY GOODMAN: Ashley Yates, I want to thank you very much for being with us. Ashley Yates is one of the young activists who met with President Obama yesterday at the White House, activist, poet, artist, raised in Florissant, Missouri. She is a member and co-creator of Millennial Activists United. This is Democracy Now! When we come back, we’ll speak with Lehigh University professor James Peterson. Stay with us. 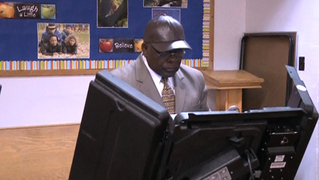