Can the President Strike an American Anywhere in the World?: Drone Memo Raises Troubling Questions

During a three-month span in 2011, U.S. drones killed four American citizens overseas. On September 30, cleric Anwar al-Awlaki and Samir Khan were killed in a drone strike in Yemen. Two weeks later, another U.S. drone killed Anwar’s 16-year-old son, Abdulrahman, in Yemen. A month later, a U.S. citizen named Jude Kenan Mohammad was killed in Pakistan. For the past two-and-a-half years, the Obama administration has refused to release its legal rationale for killing American citizens overseas. That changed on Monday when a federal court released a heavily redacted 41-page memo. It concludes the 2001 Authorization to Use Military Force gave the U.S. government the authority to target Anwar al-Awlaki, who the Obama administration claims had joined al-Qaeda. On Capitol Hill, Sen. Ron Wyden praised the release of the memo but said it raises many questions. Wyden asked, “How much evidence does the president need to determine that a particular American is a legitimate target for military action? Can the president strike an American anywhere in the world?” Questions also remain over when the United States can kill non-U.S. citizens. We speak to Hina Shamsi, director of the American Civil Liberties Union’s National Security Project.

For the past two-and-a-half years, the Obama administration has kept secret its legal rationale for killing American citizens overseas. That changed on Monday, when a federal court released a heavily redacted 41-page memo. It concludes the 2001 Authorization to Use Military Force gave the U.S. government the authority to target Anwar al-Awlaki, who the Obama administration claims had joined al-Qaeda. The Justice Department memo states, quote, “We believe that the A.U.M.F.’s authority to use lethal force abroad also may apply in appropriate circumstances to a United States citizen who is part of the forces of an enemy.”

AMY GOODMAN: The memo goes on say the U.S. could use lethal force against a U.S. citizen when high-level government officials have determined a capture operation is infeasible and that the targeted person is engaged in activities that pose a continued and imminent threat to U.S. persons or interests. The memo also states the U.S. Constitution would not require the government to provide, quote, “further process,” such as advance notice [or] a court hearing before carrying out a deadly strike on a U.S. citizen. The memo was written on July 16, 2010, months after the first known U.S. attempt to kill Anwar al-Awlaki.

On Capitol Hill, Senator Ron Wyden praised the release of the memo but said it raises many questions. Wyden asked, quote, “How much evidence does the president need to determine that a particular American is a legitimate target for military action? Can the president strike an American anywhere in the world?” he asked.

Earlier this year, a federal appeals court ordered the memo’s disclosure in response to lawsuits filed by the American Civil Liberties Union and The New York Times.

To discuss the significance of the memo, we’re joined by Hina Shamsi, director of the American Civil Liberties Union’s National Security Project.

Welcome to Democracy Now! So you got what you wanted: You got the memo. What do you find most significant inside it?

HINA SHAMSI: Well, Amy, this memo’s release is long overdue. It’s critically important for transparency. But as we see from reading the memo itself, it’s by far from enough. And there are a couple of things that I think are most important. One is both what’s in the memo, and, two, what’s surprisingly not in the memo.

With respect to what’s in the memo, as you said earlier, the justification for the killing of a U.S. citizen largely relies on the 2001 Authorization for Use of Military Force. Now, that authorization has to be read alongside the international law that regulates when the United States and any other country is or is not in an armed conflict. And one of the key things that this memo does is that it says that some of the limitations on when an armed conflict exists don’t have to apply. So it says that the things that we think of and that the law recognizes—you know, a certain level of duration of hostilities, a certain level of intensity of hostilities—those don’t have to be present. In essence, it reads away any kind of territorial limitation or temporal limitation for when war exists. And this has been one of the things we and others have been so long concerned about, which is the Obama administration’s broad interpretation of law of war authority, even when that does not exist.

AARON MATÉ: Can you talk about what the memo says about imminence? That’s such a key issue, is whether or not the target constitutes an imminent threat to the U.S.

HINA SHAMSI: And that’s one of the surprising aspects of the memo, because the concept of imminence, or what we’ve heard of earlier as a continuing imminent threat, is barely discussed in it, at least in the versions that have been made public. And this is critically important for at least a couple of reasons. First of all, the white paper that was earlier released, or leaked, that talked about the administration’s definition of a continuing imminent threat, said that the threat did not have to include specific evidence of a plot that was actually about to take place in the immediate future. So, the real-world meaning of imminence is read away. And the memo itself—again, at least in the parts that have been disclosed—does not discuss this controversial, novel interpretation, nor does it discuss how that interpretation could possibly be lawful.

AMY GOODMAN: Can you talk about the redaction in the footnotes? Why is this so significant?

HINA SHAMSI: There are multiple redactions in this memo. The largest chunks of redactions are, we know from reading the court’s opinion, with respect to the factual basis for the administration’s determination that it could carry out this killing. There’s also a set of redactions in the footnotes that appear to be about the legal justifications. And two key aspects again here. One is that without knowing the factual basis for why these killings are lawful, we don’t know whether they are in fact lawful. Repeatedly, the memo’s authors say that the legal conclusions are based on factual representations made by the CIA, by the Department of Defense and the intelligence community. It also says that senior intelligence officials can make the determination about whether facts are justified to permit the killing. And this shows you just how dangerous it is not to have any independent judicial review before or after the fact, which is what the administration has argued and what this memo seeks to justify.

AMY GOODMAN: Are there secret laws?

HINA SHAMSI: You know, I think that there are still secret interpretations of the law. One of the aspects we’ve thought has long existed is multiple legal memos. We know from Senate Intelligence Committee disclosures that there are approximately 11 legal memos governing the targeted killing program. Four of those apparently relate to citizens; the others apparently relate to noncitizens. This is a body of legal interpretation by the administration about when it can exercise perhaps the most consequential authority of all—killing of people, including its own citizens. And we do not yet have access to this body of information.

This is one of the things that the court has sent back to the district court, additional review of additional secret memos that we are seeking the release of. But, you know, the administration does not have to wait, as it did here, to be ordered by a court to release information that should be public. It can go ahead and follow through on promises of transparency and provide the legal interpretations, as well as basic information about noncitizens. Thousands of noncitizens have been killed in this program, and yet we do not know, officially, the number of noncitizens, their identity or the legal justifications for them.

AMY GOODMAN: Is there an explanation of Abdulrahman Awlaki, the 16-year-old boy that was born in Denver, who was out actually looking in the desert for his dad and was killed two weeks after his father was killed?

HINA SHAMSI: There is no mention of Abdulrahman al-Awlaki. And Abdulrahman, of course, had no idea where his father was, because he was killed hundreds of miles away. But I think that’s an important part of what remains undisclosed. The memo itself says that, you know, in essence, efforts will be made to keep all civilian bystander casualties to a minimum, and those are policy pronouncements that the Obama administration’s senior administration officials have made over and over again. Yet we know from independent reporting and independent investigations from human rights groups that, in fact, at least hundreds of people who are civilian bystanders have died in this program, and we have no basis or way of understanding what the reasons were that they were killed. And certainly none of these people have been afforded any recognition, let alone compensation, by our government for wrongful killings.

HINA SHAMSI: Well, of course, noncitizens and citizens have the same rights under international law, and we believe those rights are reflected in the human rights provisions of our Constitution. The administration has taken policy positions about what legal—what standards would be applicable to noncitizens. But here again, we go back to the lack of transparency. There are apparently seven memos that relate to the killings of noncitizens, although the administration itself has not confirmed that. And as much and as necessary as it is to know what standards apply to citizens, we also equally need to know what standards apply to noncitizens.

AMY GOODMAN: So where do you go from here?

HINA SHAMSI: We go in a number of different places. First, aspects of this case are going to go back to the court in New York, and we’re going to continue fighting for release of additional information, legal memos, factual basis. We have a second lawsuit in the District of Columbia, where we’re seeking information not just about citizens, but noncitizens, and the use of drones strikes with respect to noncitizens. But again, I think what’s really important is that the administration does not have to wait for the ACLU or The New York Times or anyone else. It can act and follow through on its promises of transparency, and it should do so.

AMY GOODMAN: We want to thank you for being with us, Hina Shamsi, director of the America Civil Liberties Union’s National Security Project.

When we come back, something like 1,500 to 3,000 water consumers in Detroit a month—a week are having their water shut off. Stay with us. 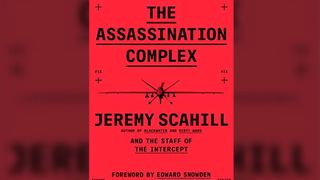