In a development many are linking to the Egyptian regime’s crackdown on dissent, Egypt’s most popular satirist announced this month that he was taking his program off the air. Bassem Youssef’s broadcast had been compared to Jon Stewart’s “The Daily Show” for its comedic take on politics in Egypt and the Middle East. The show was incredibly popular — reaching as many as 30 million views per episode. Youssef said he was ending his program rather than face censorship and threats on his life. Yousef was vague on the pressure he has faced, but suggested the military regime has made it impossible for him to continue. Speaking at the Deutsche Welle Global Media Forum, Youssef said his decision to suspend the show could be seen as a new beginning. “We have inspired a whole generation to go out there and express themselves in their own way,” Youssef says. “Satire and comedy might be one of the few antidotes against fear. It liberates your mind. It sets your judgment free. That is why it is a threat.”

StoryJul 06, 2020Egyptian Activist Laila Soueif on the Jailing of Her Children & the Fight Against Authoritarianism

AMY GOODMAN: In a development many are linking to the Egyptian regime’s crackdown on dissent, Egypt’s most popular satirist announced earlier this month he’s taking his program off the air, just days after General Abdel Fattah el-Sisi was elected president. Bassem Youssef’s broadcast has been compared to Jon Stewart’s The Daily Show for its comedic take on politics in Egypt and the Middle East. The show was incredibly popular, reaching as many as 30 million views per episode. Bassem Youssef said he was ending his program rather than face censorship and threats on his life. Youssef was vague on the pressure he has faced but suggested that the military regime has made it impossible for him to continue. Earlier today, Bassem Youssef, who is a heart surgeon by training, spoke here at the Deutsche Welle Global Media Forum.

BASSEM YOUSSEF: Fear sells. Fear works. Fear makes you get away with anything. And when people are afraid, they will not accept logic, let alone satire. Fear can drive the masses. Fear can turn them into ruthless organisms devoid of human mercy and intellectual logic. Fear can drive humans to give up their best-ever given trait: humanity. Under fear, they accept taking away the right to object, to oppose, and even applaud taking away other people’s rights. Under fear, fascism becomes coveted, and “human rights” becomes an indecent word.

Our job was to expose those irrational fears, to dissect through the unfair use of such human basic instinct in order to give up basic human rights and needs. This might sound strange, but again, let me remind you that fear sells, fear delivers. Fear is much, much more stronger. Fear might be the greatest mover of masses ever. You have experienced this during your history. The world has experienced Nazism, fascism, McCarthyism. All were movements that used fears and phobia and empty, vicious rhetoric in order to control the masses.

Satire and comedy might be one of the very few antidotes against fear. It liberates your minds. It sets your judgment free. And that is why it is a threat. And that is why people who use satire will be alienated, marginalized or even scared off. It doesn’t matter if it was a government who thinks that they are closer to God than you or a regime that believes that they are more patriotic than you. You, as a satirist, has no place in the world. It is a world where fascism is celebrated and where fear rules. But satire comes to disrupt such an equation, because when you laugh, you cannot be afraid anymore, because—and thus the system will make sure to eliminate that powerful weapon of laughter, in order for fear to set in.

But maybe there is a small beacon of hope. Maybe change will come from the most unexpected places. The world today is a young world. Youth are connected now more than ever. The Internet and the open skies offers an opportunity that was not there many years ago, when regimes can get away with anything. When we started on the Internet three years ago, we might be the—at that time, the only one in our country who did that with such a unique idea and format, but now the Internet is full of young people coming up every single day to combat fear, intimidation and media deception. We were too big to be allowed to continue, but by the time we were banned, the change has already happened. Stopping the show might be viewed as a sad ending, but we would like to look at it as a new beginning. We have inspired a whole generation to go out there and express themselves in their own way.

The old techniques of the '40s and ’50s won't cut it with those youngsters. The propaganda that worked for their parents’ generation won’t be able to control them anymore. The plethora of fascism that plagues certain regions on the planet right now is only a temporary and transient moment of time that will be soon washed away by the upcoming generation. Fascism now is overwhelming, that you might think that the long-coveted freedom is stillborn. But that is not true. As Bevan once said, “Fascism is not a new order of society. It is the future refusing to be born.” But I tell you that the future is already here. It is just warming up. So fear might sell. Fear might work. Fear might win. But it will eventually face its defeat. And the battlefield for that glorious victory will be no other than the hearts and minds of vibrant, inspired young people who will not give in to fear.

AMY GOODMAN: That’s Bassem Youssef, Egypt’s most popular satirist, speaking here at the Deutsche Welle Global Media Forum in Bonn, Germany. The Committee to Protect Journalists awarded Bassem Youssef the International Press Freedom Award in 2013. He received the award from Jon Stewart of The Daily Show, the comedian to whom he’s most frequently compared in Egypt.

Democracy Now! has two job openings. We have a job opening for an administrative director, as well as a Linux systems administrator, and fall internships. Visit democracynow.org/jobs for more information. 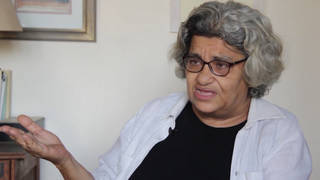