Swedish Foreign Minister Carl Bildt refuses to address questions from Democracy Now!'s Amy Goodman about the case of WikiLeaks founder Julian Assange, who is wanted for questioning in Sweden on allegations of sexual offenses. Assange's attorneys recently asked the Swedish government to withdraw a warrant that has kept him confined in Ecuador’s London Embassy for two years. Assange has voiced fears he would ultimately be sent for prosecution in the United States if he were to return to Sweden. Assange’s attorneys say the warrant should be lifted because it cannot be enforced while Assange is in the embassy and Swedish prosecutors refuse to question him in London. Although Assange faces a warrant for questioning, he has not been formally charged. Fifty-nine international organizations have submitted reports to the United Nations challenging Sweden’s treatment of Assange. Speaking at the Almedalen political festival in Visby, Bildt refuses to address the case directly, calling it an issue for the Swedish judicial system, not its political one. We get reaction to Bildt’s comments from Assange legal adviser Jen Robinson, who also discusses the parallels between Assange and National Security Agency whistleblower Edward Snowden. “We are now seeing a trend of whistleblowers, publishers, journalists having to seek asylum and refuge in countries around the world because of their concern about prosecution in the United States,” Robinson says.

AMY GOODMAN: I stayed on that line of questioning when I met the Swedish foreign minister today, Carl Bildt.

AMY GOODMAN: What are your thoughts about Almedalen?

FOREIGN MINISTER CARL BILDT: Well, it’s a very unique thing. It’s been going on for years, and it’s getting bigger and bigger. But it’s quite fun. It’s quite fun.

AMY GOODMAN: Could I ask you—we’re looking at the case of Julian Assange, and 59 legal and human rights groups have made a submission to the U.N. Human Rights Council challenging the pre-charge detention, which makes it a foreign policy issue. As foreign minister, what are your thoughts on this?

AMY GOODMAN: But because it’s in the U.N. Human Rights commission—

FOREIGN MINISTER CARL BILDT: That doesn’t make any difference whatever, because it’s still a legal issue within the legal system. And as you have in the U.S., I guess, you have the separation between the executive and judicial branch. And the executive—that’s sort of the nature of democracy or constitutional democracy. If you’re a representative of the executive branch, you have no say—and shouldn’t have any say—in what the judicial branch is doing. And that applies here, as well.

AMY GOODMAN: Will it weigh into the Universal Periodic Review that Sweden is up for now before the U.N. Human Rights Council?

FOREIGN MINISTER CARL BILDT: I haven’t a clue. I would doubt that very, very much, I have to say.

AMY GOODMAN: Could I ask why they—Sweden doesn’t just question him at the Ecuadorean Embassy in London, where he is?

FOREIGN MINISTER CARL BILDT: You would have to ask the legal and judicial system on that, of course.

AMY GOODMAN: Then, last question is: Is this an issue that’s being raised to you more and more as you travel as foreign minister?

FOREIGN MINISTER CARL BILDT: No, I think I haven’t heard it for a long time. I think you are the first one to bring it up with me for probably a year or something like that.

AMY GOODMAN: Are you concerned about it? Is it a concern in Sweden, considering he’s been dealing with this for four years?

FOREIGN MINISTER CARL BILDT: Go around here and judge yourself. I think the answer is, was no.

AMY GOODMAN: Swedish Foreign Minister Carl Bildt. I met him today here at this open-air democracy festival, where the politicians, the prime ministers, the foreign ministers, representatives in the Parliament walk by everyday people as they discuss issues of democracy.

Right now, we’re ending the show with Jen Robinson. She is the legal adviser to the WikiLeaks founder, Julian Assange, who has just passed the two years holed up in the Ecuadorean Embassy in London. He was granted political asylum in Ecuador.

JENNIFER ROBINSON: Julian, it’s been almost four years now since these allegations first surfaced. And we filed an appeal last week before the Swedish courts to challenge the arrest warrant, because we say it’s disproportionate. It’s been four years that he’s been waiting for the purposes of being questioned on these allegations, and it’s available to the Swedish prosecutor to be able to go to London and to question him there in London.

AMY GOODMAN: Just step back for a moment. Explain why he is being—Britain has agreed to his extradition. What was he charged with here in Sweden?

JENNIFER ROBINSON: Julian is facing a number of sexual offense allegations. He hasn’t been charged yet. The case before the British courts was purely on the applicability and the validity of the European arrest warrant. It didn’t consider the underlying evidence in the case. We have filed an appeal here in Sweden to challenge the detention, because we say that it is possible for them to question him through other means. He doesn’t need to be in custody to be questioned. And Sweden has done this in a number of other cases. We’ve also applied for—

AMY GOODMAN: You mean that they could go to the Ecuadorean Embassy in London and question him. I mean, this issue of him not having even been, in the U.S. term, indicted might surprise many.

JENNIFER ROBINSON: It’s been almost four years, and he hasn’t yet been charged. The Swedish prosecuting authority says that they need to question him one more time before they can make a decision about whether to charge him or not. And we’ve been offering his testimony since 2010. The Ecuadorean ambassador has offered him to be questioned with no restrictions from within the Ecuadorean Embassy. And we say that this is a reasonable and proportional measure for the Swedish prosecutor to take. If it is possible for her to be able to resolve this case, then she ought to take the means that are available to her to do so.

AMY GOODMAN: What about here, the appeal that was just introduced this week by the Swedish lawyers for Julian Assange?

JENNIFER ROBINSON: Julian’s Swedish counsel have filed an appeal against the arrest warrant based upon the disproportionate exercise of discretion of the prosecutor and the fact that they could actually question him in the embassy. They’ve also applied for the evidence in the case, because we believe that evidence exists which fundamentally undermines the prosecutor’s case and would show grounds to drop the case. So we’re waiting to get access to that evidence. That appeal should be heard any time in the next week. But I think while this is certainly a legal issue and an issue for the Swedish prosecutor, undoubtedly this has political ramifications for Sweden, for the U.K. and for the United States, so I do think that it is an issue for Mr. Bildt to give comment on.

JENNIFER ROBINSON: Of course there are similarities. We’re seeing now a trend of whistleblowers, publishers, journalists having to seek asylum and seek refuge in countries around the world because of their concern about prosecution in the United States. Julian is inside the Ecuadorean Embassy because of his concern of prosecution for his publications associated with WikiLeaks. Edward Snowden is in asylum in Russia for releasing that information. So, yes, the cases are similar. And this is our main concern. We would like to resolve the Swedish case. It is not about the Swedish case for Julian being in the Ecuadorean Embassy; it is a matter about the United States’ potential prosecution.

AMY GOODMAN: Why the United States? Let’s end there.

JENNIFER ROBINSON: We know this because it came out in court filings just last month, filed by EPIC, a Freedom of Information case. We know that there’s an ongoing grand jury. And the Department of Justice continues to say that this is open. Unless and until the U.S. gives an assurance that Julian will not be prosecuted, he will remain inside the Ecuadorean Embassy. And that is, and has always been, our main concern.

AMY GOODMAN: Well, Jen Robinson, I want to thank you for being with us. Jen Robinson is the legal adviser for Julian Assange. She’s here at Almedalen, the political week, an open-air democracy festival in Sweden.

That does it for our show. I want to thank all the people who made this broadcast possible, the folks here in Sweden. Happy birthday in New York to Naqi Cruz.

Democracy Now! has two job openings, for an administrative director, as well as a Linux systems administrator. And we have fall internships. Visit democracynow.org/jobs for more information.

I’ll be speaking here in Visby on Thursday at 3:30 at the Church of Sweden. Go to our website for that information, as well.

I want to thank our local crew here: Gunnar Hoass and Lars Thörnqvist and to Kajsa Övergaard. Special thanks to John Hamilton and Denis Moynihan and Mike Burke. 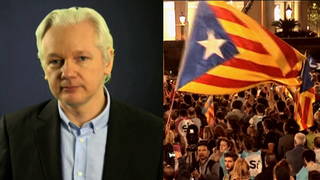