It was five years ago today that the U.S. Supreme Court issued its landmark Citizens United decision, allowing unlimited political spending by corporations and unions. Some of the biggest spenders since have been the billionaire brothers David and Charles Koch. On Tuesday night, newly elected Republican Sen. Joni Ernst of Iowa, who was strongly backed by the Koch brothers, gave the GOP response to President Obama. Meanwhile this weekend, four leading Republican presidential prospects — Sen. Ted Cruz, Sen. Marco Rubio, Sen. Rand Paul and Wisconsin Gov. Scott Walker — are set to appear at an exclusive gathering of rich conservatives organized by the Koch brothers. We speak to longtime consumer advocate Ralph Nader and Lisa Graves, executive director of the Center for Media and Democracy, which published an article Tuesday headlined “Koch Party Delivers SOTU Response.”

JUAN GONZÁLEZ: It was five years ago today that the Supreme Court issued its landmark Citizens United decision, allowing unlimited political spending by corporations and unions. Some of the biggest spenders since have been David and Charles Koch. This weekend, four leading Republican presidential prospects are set to appear at an exclusive gathering of rich conservatives organized by the Koch brothers: Senator Ted Cruz, Senator Marco Rubio, Wisconsin Governor Scott Walker and Senator Rand Paul. The Koch brothers were also among the key backers of newly elected Republican Senator Joni Ernst of Iowa, who gave the Republican response last night to President Obama’s State of the Union.

SEN. JONI ERNST: The new Republican Congress also understands how difficult these past six years have been. For many of us, the sting of the economy and the frustration with Washington’s dysfunction weren’t things we had to read about—we felt them every day.

AMY GOODMAN: That is Senator Joni Ernst, the new senator from Iowa. For more, we go now to Madison, Wisconson, where we’re joined by Lisa Graves, executive director of the Center for Media and Democracy. They published a piece Tuesday headlined “Koch Party Delivers SOTU Response.”

Welcome back to Democracy Now!, Lisa. Why that title?

LISA GRAVES: Well, this is really—it really is the Koch party response, because although Joni Ernst gave a nice speech last night, I think she showed a little more enthusiasm when she was caught on tape at a closed-door meeting with the Koch brothers and their billionaire buddies, thanking them for really being the source of her trajectory to power. And so, she made very clear in those private remarks how dependent she is on the Koch party, basically, the Koch brothers network that they’ve created, which is really a shadow party that in many ways is overtaking the Republican Party in terms of its influence and power.

Koch Industries gave money to her campaign directly. Charles Koch gave money to her campaign directly that was disclosed. They also gave money to a number of groups that don’t disclose their donors, as well as some of the super PACs that they’ve helped bankroll. In fact, one of the super PACs that’s been big in Joni Ernst’s race was one of the Freedom groups, where literally David Koch and Charles Koch each gave $2 million out of their trust fund, not even out of their direct checking account, you know, out of—out of the millions and millions and millions and billions, in fact, they have in their trust.

And so, in some ways, at the anniversary of Citizens United, it’s more than appropriate to take stock of what’s happening, when you have, basically, this Koch party, that has come to power as a result of Citizens United, really giving the response to the president of the United States.

JUAN GONZÁLEZ: Well, Lisa Graves, The New York Times today has a front-page story talking about how the various Republican presidential hopefuls are falling over themselves to try to get meetings with the Koch brothers, to get exposure to their network of donors. How have they gotten such a huge—become such a huge force within the Republican Party?

LISA GRAVES: Well, it’s just money. And it’s really the conversion of money into the idea, by the Supreme Court, that money is speech and can’t be limited or restricted. This is the terrible fruit being harvested, basically, by a minority—basically, a majority of the Supreme Court that has been backing corporate power with very few limits. And so, you know, it’s about money. And these are two of the richest guys on the planet, David and Charles Koch. They are cultivating these politicians to do their bidding.

But when you see the results in the states, states like Wisconsin and Kansas, where you have these Kochites who are at the helm, whether it’s Walker or Brownback, you see a real devastation to the economy from these Koch types of policies. And these policies are really out of step with what many Americans want when they actually have a chance to vote at the polls. At the polls, while the Republican Party, through this dark money and these super PACs, rose to power in this last election, but at those polls, those same polls, ordinary citizens, when voting on paid sick leave or increases to the minimum wage or protections to have notice about GMOs, they voted for progressive policies. But unfortunately, the dark money and these super PACs really had a huge impact on this last election cycle.

AMY GOODMAN: So, the Koch brothers convergence will take place in California in—what is it? In Palm Springs, at this exclusive area for particular presidential candidates. Recently, Rand Paul went to visit at the Wichita headquarters of the Koch brothers. Senator Ernst, calling for elimination of the EPA and the Department of Education, she told a very different story last night in a very eloquent State of the Union address. Yes, she called for the Keystone XL to be passed, said that’s key, but also talked about her own very humble beginnings. Ralph Nader, your response, and the power of the Koch brothers and the new Republican majority and what you think needs to be done?

RALPH NADER: Well, first of all, there should be a state legislature that asks the Koch brothers to come and testify and answer questions. Congress should have a congressional hearing on this, but the Republicans are in control. But nobody ever does anything more than expose the Koch brothers. Well, put them out in the public light and cross-examine them.

My favorite approach is that every major corporation does business with the federal government, and the federal government should simply say that if you want contracts with Uncle Sam, you cannot give money to political campaigns. There are some towns in California who basically say anybody who does business with city hall cannot make contributions. So that’s one way to limit the effect of Citizens United and other judicial decisions.

But for the overall citizen strategy against Citizens United, go to citizen.org — that’s Public Citizen’s website — which has a diverse approach to mobilize people to amend the Constitution, but, in the meantime, to do other things that will limit the effect of putting our politicians on an auction block for the highest bidder.

And last thing I’d say, Amy, is, let’s get the American people more skeptical. Just have a rule: You don’t believe any political ad on TV. Forget it. Close it off. It affects about 10, 15 percent of the swing vote. Most people are hereditary voters—Republican, Democrat, maybe Green Party—but, by and large, it’s that 15 percent swing vote that’s extremely vulnerable to these political ads, because people don’t do their homework on the candidates, their records, and what they’ve done and not done in the interest of the people contrast to the interest of big business and the plutocracy.

AMY GOODMAN: We’re going to have to leave it there. I want to thank you, Ralph Nader, former presidential candidate, longtime consumer advocate. His latest book, Unstoppable: The Emerging Left-Right Alliance to Dismantle the Corporate State. And thanks so much to Lisa Graves, executive director of the Center for Media and Democracy in Madison, Wisconsin. 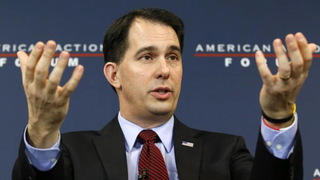