Over 10 days, six predominantly black churches have been set ablaze in the St. Louis area of Missouri. Police and fire officials say there’s no doubt the fires are deliberate. All the fires were set within a three-mile radius of northern St. Louis. The area includes Ferguson, where the police killing of unarmed African-American teen Michael Brown set off protests and a national movement more than a year ago. The burnings come after a series of fires at African-American churches across the South following the Charleston church massacre in June. Three of those fires were ruled as arson. White supremacists have targeted black churches with burnings dating back to the Civil War. We are joined by two guests: Rev. Rodrick Burton, pastor of New Northside Missionary Baptist Church, attacked by an arsonist on October 10, and Jeffrey Mittman, executive director of the ACLU of Missouri.

CAPT. GARON MOSBY: It is arson. These are being intentionally set. You know, they’re doors. These things aren’t—it isn’t spontaneous combustion, so they’re not occurring on their own.

AMY GOODMAN: All the fires were set within a three-mile radius of northern St. Louis. The area includes Ferguson, where the police killing of unarmed teen Michael Brown set off protests and a national movement more than a year ago. The burnings come after a series of fires at African-American churches across the South following the Charleston church massacre in June. Three of those fires were ruled as arson. White supremacists have targeted black churches with burnings dating back to the Civil War.

We’re joined now by two guests in St. Louis. Reverend Rodrick Burton is pastor of New Northside Missionary Baptist Church, attacked by an arsonist October 10th. And Jeffrey Mittman is the executive director of the ACLU of Missouri.

We welcome you both to Democracy Now! Let’s start with Reverend Rodrick Burton. Talk about what happened to your church, the day, how you learned what was happening. Were you there?

NERMEEN SHAIKH: And, Reverend Burton, do you have any idea who was behind the attack?

REV. RODRICK BURTON: No, I have no idea. No one left any sort of threatening voicemails or sent any threatening letters, so I don’t have any idea.

NERMEEN SHAIKH: Jeffrey Mittman, could you talk about what we know so far about these attacks on churches?

AMY GOODMAN: You have called this, Jeffrey Mittman, domestic terrorism, this series of burnings of churches. Explain why.

JEFFREY MITTMAN: What we need to remember is, throughout American history, in the struggle for African-American equality, there are white supremacists who use church burning as a tool to instill fear, to tell the community, “You may not fight for equality. We don’t want you to have the rights the rest of us have.” And we think it’s important that those of us in the majority community step up and acknowledge this history and stand with our African-American community members, friends and neighbors.

NERMEEN SHAIKH: Well, over the summer, the FBI launched an investigation into fires set at seven different African-American churches in seven days across the South. The fires began on June 21st, just days after the Charleston massacre, and occurred in six different states—Tennessee, Georgia, North Carolina, South Carolina, Florida and Ohio. At the time, Democracy Now! spoke to Richard Cohen, president of the Southern Poverty Law Center, about his organization’s call for congressional hearings into domestic terrorism.

RICHARD COHEN: We have called for those hearings before both the Senate and the House, the committees that look at the Department of Homeland Security. You know, since 9/11, we’ve—you know, our resources in the domestic terrorism fight have skewed perhaps too heavily towards jihadi terrorism, at the expense of the forms of domestic terrorism that we saw exhibited in the Charleston massacre. You know, what we think is, we should allocate our resources in accordance with the nature of the threat. 9/11 will always be the Pearl Harbor of our time, but that doesn’t mean all the resources should go in that direction.

NERMEEN SHAIKH: That was [Richard] Cohen of the Southern Poverty Law Center. Jeffrey Mittman, could you comment on what he said?

JEFFREY MITTMAN: Yeah, again, I think his comments are very apt. We know, here in St. Louis over the past year-plus, the community has been working to deal with a history of racism, policies and procedures that have targeted the African-American community—exclusions from housing, policing that is unequal, educational systems that are unequal. And what we see throughout our history is any time there’s an effort by the community to fight for its right, there are those who seek to use fear and who will target the churches, which have historically been a place where the community gathers to plan, to come together—a haven—and tries to send a message that if you fight for your rights, we will fight back against you.

AMY GOODMAN: Over the summer, Republican Congressmember Peter King of New York, who sits on the House Homeland Security Committee, disagreed with the idea that white supremacists could be more dangerous than Muslim extremists. He was speaking on ABC’s This Week.

REP. PETER KING: I can’t believe any real law enforcement officer, looking at the potential of threats that are out there—for instance, the Boston Marathon bombing, there were four killed, almost 300 people wounded. And the fact that in—that Eric Holder, who was a pretty liberal attorney general, said what kept him awake at night was the lone wolf Islamist terrorist who would carry out an attack. There’s no—listen, every murder is horrible. There’s no comparison between these white supremacists and an internationally coordinated movement, which, if the attacks were not stopped, we could have thousands and thousands of deaths.

AMY GOODMAN: Now, that is Congressmember Peter King of New York. I wanted to ask Reverend Rodrick Burton, pastor of the New Northside Missionary Baptist Church—we don’t know who set these fires. We do know that in the fires that happened after the Charleston, South Carolina, massacre, at least three have been called arson. But what are your thoughts on what he said, on what Congressman King said?

REV. RODRICK BURTON: Well, it’s very tragic that one of our representatives of our federal government is so ill-informed. Americans have always been the best at killing other Americans. There’s a history of that. And while as tragic as 9/11 was, if you take a brief survey of American history, in the 20th century, 19th century—you have anarchists, you have the Klan—Americans have always excelled any other outside group at harming other Americans.

AMY GOODMAN: And how are you organizing, Reverend Burton, with other ministers of these churches? I mean, this is the area around Ferguson, is that right? How—what are you calling for right now?

REV. RODRICK BURTON: What I have been consistently calling for is that there will be a coming together of the faith community in St. Louis, because we have a long and a shameful history of division in the city of St. Louis for a number of reasons—a continuing legacy of racism and structural racism. But I really felt that in an instant like this where churches were being attacked, it was an opportunity for the St. Louis faith community to stand up and lead the way in a coming together. But also I felt like this had a larger implication of: An attack on your freedom of religion should rile any American of whatever faith, of no faith. And I was very encouraged that yesterday at our community prayer service there were some who were agnostic who came up and said, “Yes, we agree with you. This is wrong. We are concerned.” I had a few phone calls.

But again, what troubles me is not so much these attacks, but the community’s responses to these attacks. And, you know, I know America loves baseball and sports, but it seems it’s easier to get a conversation with an American about a rivalry of a national sports team than to have a discussion about, wow, our sacred freedom, freedom of religion, to practice or not, is being challenged and attacked. So, I’ve been very intentional and very relentless—matter of fact, I’m losing my voice—to try to get the community to come together and get people to stop and think about a precious freedom and think about how we should appreciate that. And we should collectively say, this is something that we don’t want and does not represent us.

AMY GOODMAN: I want to thank you both for being with us, Reverend Rodrick Burton, pastor of the New Northside Missionary Baptist Church in northern St. Louis, also Jeffrey Mittman, executive director the ACLU of Missouri.

This is Democracy Now!, democracynow.org, The War and Peace Report. When we come back, we look at the case of Shaker Aamer. He has been in prison since 2007 at Guantánamo—he was supposed to be released in 2007, and yet it’s taken 'til 2015 for his release. He's set to be released on Sunday. You’ll find out who he is. Stay with us.

Shaker Aamer: After 5,000 Days of Torment, Last British Prisoner at Guantanamo is Set for Release

NEXTShaker Aamer: After 5,000 Days of Torment, Last British Prisoner at Guantanamo is Set for Release 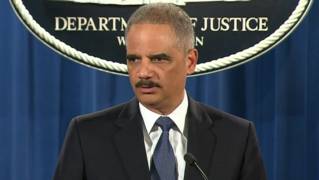