The protests at the University of Missouri come as a similar dynamic plays out at one of the nation’s top Ivy League schools. On Monday, more than 1,000 students at Yale University in Connecticut held a march over racism on campus. The “March of Resilience” comes after several incidents where students of color said they faced discrimination. One woman of color was reportedly denied entry to a fraternity party because she is not white, and a faculty member drew criticism after rejecting calls for students to avoid culturally offensive costumes on Halloween. Monday’s crowd chanted slogans including: “We are unstoppable, another Yale is possible.” We are joined by Lex Barlowe, African American studies major at Yale University and the president of the Black Student Alliance.

AMY GOODMAN: We move on right now to Yale University. The protests at the University of Missouri come as a similar dynamic is playing out at one of the nation’s top Ivy League schools. On Monday, about a thousand students at Yale University in New Haven, Connecticut, held a march over racial insensitivity on campus. The “March of Resilience” comes after several incidents where students of color said they faced discrimination. One woman of color was reportedly denied entry to a fraternity party because she’s not white, and a faculty member drew criticism after rejecting calls for students to avoid racially insensitive costumes on Halloween. Monday’s crowd of a thousand chanted slogans including, “We are unstoppable, another Yale is possible.”

For more on the protests, we’re joined by Lex Barlowe, African American studies major at Yale University, president of the Black Student Alliance.

We welcome you, Lex, back to Democracy Now! Can you talk about what is concerning students at Yale?

LEX BARLOWE: Absolutely. Thank you so much. Yeah, so, I think, as you said, there have been specific incidents this past week, week and a half, that have really been very blatant and obvious about the ways in which the Yale community is really not welcoming or hospitable or even safe for students of color—in particular, women of color—on campus. And so, the thing that happened at the fraternity party and the way in which administrators are undercutting each other by, you know, first, an administrator—administrator sending out an email saying, “Please like respect—do not be culturally appropriative for Halloween,” and then another administrator saying, “Actually, cultural appropriation is fine. Maybe should just look away if someone is doing something that is completely disrespectful to you and your entire culture and tradition.” You know, these are things that are very public right now that have happened and have really brought to a head the ways—the ways in which more broadly and more systemically Yale is just not safe for people of color. And so, you know, we’ve been talking about these specific incidents—

AMY GOODMAN: I want to go to Thursday, Lex—

AMY GOODMAN: —when hundreds of students confronted Nicholas Christakis, the master of one of the college’s residential dorms, over the email that his wife sent in which she condoned offensive Halloween costumes.

STUDENT: The moral of the story is that she wants an apology. Yet you respond not with an apology. That’s—

STUDENT: That’s my question. I’m just saying, are you going to—are you—

NICHOLAS CHRISTAKIS: What if I said—

AMY GOODMAN: Students confronting Nicholas Christakis, a master of one of the college’s residential dorms at Yale. Lex, if you could explain what the letter was that his wife sent out about Halloween costumes?

LEX BARLOWE: Yeah, absolutely. So, the Intercultural Affairs Council, which is a body of various administrators at Yale, sent out an email a couple of days before saying, you know, “Please do not be culturally appropriative for Halloween. Respect other people’s traditions. Do not wear anything that is not your own culture.” Pretty simple and pretty polite, to be honest. And a couple of days after that, the Associate Master of Silliman College Nicholas Christakis’s wife Erika Christakis sent out an email to the residents of her residential college basically saying, “None of that matters. Do whatever you want. The university is trying to control you. They’re trying to tell you what to do. If you want to be culturally appropriative, it’s OK if you really like it. You can do whatever.”

And so, you know, students were outraged. It was basically an outright—you know, completely ignoring the students in her college and also in the university who find these issues to be not just, you know, discomforting and upsetting, but really deeply harmful and actually creating space for violence to happen on campus. And in particular, the advice that she gave was to either look away or to engage in dialogue with someone who might be wearing something culturally appropriative. And when students actually did try to engage with people, they were harassed, they were mocked, they were, you know, physically intimidated. And so, it really did create a completely unsafe atmosphere on campus.

AMY GOODMAN: And then, what happened this weekend with the confrontation of hundreds of African-American students on campus who were questioning the first African-American dean, Dean Holloway, who used to be the master of one of the residences, and even the word “master” has come up now as a question of why the heads of these residences, the dorms, are called masters?

LEX BARLOWE: Yeah, absolutely. So, you know, we actually had a forum the night before, where students were airing grievances. Students were crying. People were telling their stories about the ways in which these events just pointed to broader issues of Yale not being a safe and welcoming environment for students of color. And after hours of that the night before, we came out to Cross Campus to chalk, to write affirmations, to draw pictures, to just sort of be with each other.

And Dean Holloway came out to Cross Campus to look. He had actually not attended the forum the night before. And up until this point, which was almost a week after these—both of these incidents had happened, there was no acknowledgment from the administration whatsoever that any of this had happened. There was not even an email. And so, students began demanding of him, “Where is our email? Where is our email? Why have you not acknowledged this?” in particular because when past events of hate crimes, to be honest, have happened in the past, Dean Holloway had sent out a response within under 24 hours, like immediately addressing it.

And so, students were furious, especially in the black community, as Dean Holloway is the first black dean of Yale College, really expecting him to be more accountable to us. And so, we ended up being out on Cross Campus for hours and hours right before the confrontation with Nicholas Christakis happened, and people were just telling him their experiences. People were expressing their disappointment and their anger and their pain for hours, again, in public, you know, women crying in front of him, black men saying, like, “You were my role model, and now you’ve lost that respect.” It was really—it was, more than anything, just really sad and very painful and also a very public display—

AMY GOODMAN: Lex, we just have 30 seconds, but I want to ask about last night’s March of Resilience.

AMY GOODMAN: Was it also inspired by or fueled by what happened at the University of Missouri? And in this 30 seconds, if you can say what are your—what do you want to see happen now?

You know, the march, for us, was really about reclaiming our right to community and demonstrating the beauty and resilience that we have for each other and with each other. And, you know, at this point, it was really not as much about what happened at the fraternity or the email that was sent out, but really was about these broader issues on campus.

And so, we have specific demands of the administration, which include—you know, which include more diversity sensitivity trainings. We have things that are related to the ways in which faculty get hired, ethnic studies departments being underfunded, faculty of color being retained. And we’re working on fleshing those out even more, but, for now, really just celebrating the women of color who have been leading this movement and been leading the organizing on campus, and who are also most deeply affected by these problems.

AMY GOODMAN: Lex Barlowe, I want to thank you for joining us, African American studies major at Yale University, president of the Black Student Alliance. When we come back, we go to Cairo, Egypt. 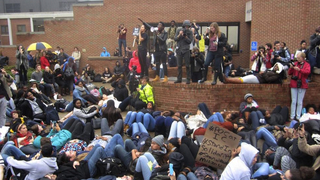