The current draft of the U.N. climate change agreement does not include gender equality, and critics have also noted the lack of women in leadership roles at COP21 in Paris. We speak with former Irish President Mary Robinson, who argues the gender impacts of climate must be addressed. “If you undermine poor livelihoods, who has to pick up the pieces? Who has to put food on the table? Who has to go further in drought for firewood?” Robinson asks. “The vast majority of farmers in the developing world are women.” Robinson is president of the Mary Robinson Foundation – Climate Justice. She served as president of Ireland from 1990 to 1997 and U.N. high commissioner for human rights from 1997 to 2002.

AMY GOODMAN: Now, you were a president. You were the president of Ireland. We saw the big family photo the first two days of this COP, where you had more than a hundred world leaders, about 130 world leaders, standing together, the largest gathering of world leaders in the history of the world. There were not many women. Can you talk about why that matters?

MARY ROBINSON: It matters hugely that we have more women in leadership roles. And leadership happens at all levels, but it’s good if you have top leaders because they influence the policy of their country and they influence priorities. They decide what will be important as, you know, a priority of the country. There are women and supportive men who have been working for years, in the climate context, to try to ensure that there—that human rights and gender equality are fully recognized, because they are important to good climate policy.

AMY GOODMAN: What does gender equality have to do with climate change?

MARY ROBINSON: Oh, there are huge gender impacts of climate, huge impacts. If you undermine poor livelihoods, who has to pick up the pieces? Who has to put food on the table? Who has to go further in drought for firewood? The agents of—those who are trying to adapt and be resilient, the vast majority of farmers in the developed world, are women. So, it is usually important that the gender dimensions are recognized, both the fact that women are more vulnerable, because even in natural disasters they are four times more likely to die than men—14 times, because they care about their children and try to hug them, they can’t run very fast in long clothes—a whole variety of reasons.

AMY GOODMAN: I want to ask you a question. On Wednesday, there was a major protest here last night.

AMY GOODMAN: Democracy Now!’s Amy Littlefield got a chance to speak afterwards with Ashfaq Khalfan, director of the law and policy program at Amnesty International. He talked about the status of human rights in the current draft of the climate accord.

ASHFAQ KHALFAN: At the moment, they are bracketed. We don’t know if states are going to accept them, so there’s still a debate over whether to keep them in the part of the text where it’s about how they’re applied throughout. We’re a bit worried because gender equality has just been dropped from the same provision, and we think that that was a trade-off, where some states agreed to drop gender equality in order to drop the reference to the rights of occupied—peoples living under occupation.

AMY LITTLEFIELD: Could you explain which states you’re talking about?

ASHFAQ KHALFAN: Yes. So, Saudi Arabia is one country that we are talking about, which opposed—which insisted there must be language about the rights of people under occupation. The United States and other countries oppose that. And as a result, they traded, where the gender equality was taken out to make the Saudis happy and the rights of occupied people was taken out to keep the United States and other states happy.

AMY GOODMAN: So, there you have Ashfaq Khalfan of Amnesty International. President Robinson, your response?

MARY ROBINSON: Broadly, I agree with him. Neither human rights nor gender equality are secure in the text. Human rights is still in the operative art, which is very important, but it’s in brackets and could go.

AMY GOODMAN: And what does brackets mean, for laypeople?

MARY ROBINSON: Brackets means that it’s not agreed. If it’s not in the brackets, then that’s text that has been agreed. There are a lot of brackets still in this process.

MARY ROBINSON: Well, and gender equality, for reasons we don’t understand, was dropped out of that. It was protection of human rights and promotion of gender equality. And obviously I want both, because they’re both extremely important. And—

MARY ROBINSON: Well, yeah, maybe. There are a lot of negotiations going on. I think there are a lot of countries who want gender equality back in, so we’re not at the endgame yet. And I think it’s more important that we see wide support. I’ve just come from a roomful of people, including a number of ministers and delegates, who are supportive of both human rights and gender equality. They see them as being very much part of the core principles of the United Nations.

And the reason we want this language in is not just to see these words. The reason we want the language is, is the values that are behind those words and the importance for good climate policy. We’ve made mistakes. Do you remember the corn for ethanol driving up food prices for poor people? We’ve had dams—and we’re still having them—that displaced people with poor land rights. And, you know, there’s going to be a rush for renewable energy. And unless we make sure it’s done responsibly and in accordance with human rights principles, we could have more people affected by how we take action on climate, who are already suffering from climate change.

AMY GOODMAN: I wanted to ask you about the divestment movement.

AMY GOODMAN: As president of Ireland, you were active on divesting from South Africa, the apartheid regime. There’s this whole movement around the world, whether in foundations—and you have a foundation—whether in companies, universities, to divest from fossil fuels.

MARY ROBINSON: Well, what I always say—I support the movement, but I say divest from fossil fuels and invest in renewable energy, because otherwise you’re not moving that equation fast enough. We need more investment in renewable energy and in R&D, and we definitely need countries and companies to get out of coal. I mean, that’s the worst. And also we need to leave two-thirds of the fossil fuel in the ground. We have a paper of my foundation, “Zero Carbon, Zero Poverty the Climate Justice Way.” And we say we have to get out of carbon by 2050. But the interesting thing, just to show you that—there’s a business group here and a lot of business here that is more progressive. And there’s a B Team, which I am linked to through my—the fact that I’m an elder, you know, getting on, elder, brought together by Nelson Mandela.

AMY GOODMAN: You were part of the Council of Elders that President Mandela gathered.

MARY ROBINSON: Yes, exactly, yeah. And The B Team is business leaders who are saying, “We want net zero greenhouse gas emissions by 2050,” you know, stronger than we’re likely to see in the text here, unfortunately. So, business is saying, “Please, give us the—give us a mandate. Give us a challenge, if you like. Make us go faster in getting out of fossil fuel. Take away the subsidies on fossil fuel. Put a price on carbon.” That’s what business is saying, as well as civil society.

AMY GOODMAN: President Mary Robinson, you have said that climate change will lead to further radicalization. What do you mean?

MARY ROBINSON: Well, you know, if you’re in a situation where you’re already isolated and in poverty, and then you have the buffeting or displacement of climate change—because it will be a driver of more and more people becoming displaced—you know, it’s another reason to feel totally frustrated with the inequities in the world. And young people can be influenced, as we know, to be radicalized, to become very frustrated, just as young people are wonderful in an arena like this. We’ve had young girls and other young people who are rallying to make sure that we do the right thing. But if we don’t, you know, if people feel hopeless and jobless, and then it’s made worse through climate change, which they know is human-induced now—I mean, it’s the lifestyles of rich countries that have caused this—so, yes, it can lead to radicalization.

AMY GOODMAN: We’re going to talk more about loss and damage, but there’s a great deal of anger among the LDCs, the least developed countries, and the developing countries around the issue of responsibility—not just charity, like help a country—

AMY GOODMAN: —that is suffering terribly from climate change, but that the most developed countries—the historically biggest emitter, the United States; the largest emitter now, China—owe money and support to the countries that are suffering from their excess.

MARY ROBINSON: Certainly, that whole issue of money, of climate finance, is a key issue, and it’s still not resolved. And I feel that we don’t talk about it in the right way. We talk about climate finance as if it was charity for poor countries that have to somehow now make changes and adapt and grow, without emissions, into renewable energy. But in fact—in fact, what we should be saying is, climate finance is a means to a safe world for all of us. And we should be looking at it from the point of view of how do we encourage India, for example, that is going solar very dramatically, but it’s also saying we have to also invest in coal. If China—if India invests in a large amount of coal, that’s 30 or 40 years. It will be too late. It’s in our interests to say to countries like India and African countries, countries that have to develop and build their infrastructure, “Let us help you, because it’s in our interest, too,” and share the technology and bring in the private investment. We need the $100 billion a year by 2020 as a leverage for trillions into developing countries, to help them leapfrog into the renewable energy.

Fmr. Irish Pres. on Refugees: “It’s Shameful So Many Died and So Many Live in Terrible Conditions”

NEXTFmr. Irish Pres. on Refugees: “It’s Shameful So Many Died and So Many Live in Terrible Conditions” 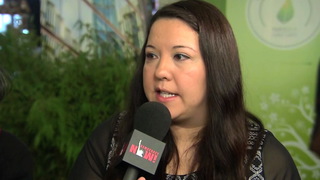