The seventh-largest economy in the world has “de-linked carbon from GDP,” says Kevin de León, president pro tem of the California Senate. De León led the effort in the California Senate to pass a resolution to divest two of the world’s largest pension funds from fossil fuels: CalPERS and CalSTRS, the California Public Employees Retirement System and California State Teachers’ Retirement System. Together, the two funds represent nearly $500 billion in assets. California is in its fifth year of a massive drought, de León notes, and has faced devastating forest fires linked to climate change. We also speak with Bill McKibben, co-founder of 350.org, which has played an instrumental role in the divestment movement.

AMY GOODMAN: To talk more about these developments, we’re joined right now by Kevin de León, who is president pro tem of the California Senate. He led the effort in the California state Senate to pass a resolution to divest two of the world’s largest pension funds: California’s Public Employees’ and State Teachers’ Retirement System. Together, the two funds represent nearly $500 billion in assets. Also with us, Bill McKibben, co-founder of 350.org, which has played an instrumental role in the divestment movement.

We’re going to begin with the president of the California state Senate. We just heard May Boeve lay out the cities around the world that are divesting. California, talk about the significance of the state and what’s happening there.

SEN. KEVIN DE LEÓN: Well, thank you so much, Amy. The significance, I think, is huge, because California is the seventh-largest economy in the entire world, on planet Earth. And what we have done successfully to date is that we have delinked and decoupled carbon from GDP, which is very important. To underscore that, that means we have actually grown the economy, we have added more jobs in California, put people to work; simultaneously, we have actually reduced our carbon emissions output in California, specifically with Senate Bill 185.

I think it is abhorrent that we align our values with our policies. Thermal coal is among the dirtiest fossil fuels in existence. They cause a lot of diseases, illnesses for young children, emphysema, cancer. Asthma rates have skyrocketed because of dirty fossil fuel, specifically because of thermal coal. So what we did with Senate Bill 185 is we ensured that the pension plans in California combined CalPERS and CalSTRS, which are the largest in the nation, half a trillion, half a—$500 billion in value divest from thermal coal. So, starting in 2017, all our investments in our pension plans in the state of California will be thermal coal-free.

AMY GOODMAN: And how do you answer those who say it’s illegal, actually, to do this, because you’re supposed to simply maximize profit, these pension funds?

SEN. KEVIN DE LEÓN: I think that’s a very fair question, because, first and foremost, we have movements happening throughout world, throughout the country, but specifically these pension plans have a fiduciary responsibility to the pensioners, whether they’re teachers, firefighters, police officers. We’ve got to make sure we return value, maximum value. But the bottom line is this, and I want to underscore the following: With regards to thermal coal in America, the value from these publicly traded companies have fallen at least approximately by 95 percent. So that is a bad, risky bet for pensioners in California and throughout the nation.

AMY GOODMAN: At the news conference just before our broadcast, you described the serpent. Explain.

SEN. KEVIN DE LEÓN: Well, in my district, as a senator for the state of California, as the leader, but in my Senate District 24, 1 million constituents, downtown Los Angeles, we have the freeways, we have the 2, the 5, the 10, the 60, the famous Hollywood 101 freeway, the 710 as well as the 110 freeway. These are seven major freeways that crisscross my district like a serpent that chokes the air, the oxygen out of a young child’s lungs. And that’s why asthma rates are so high, skyrocketing. The number one reason for absenteeism in our public school system is due to asthma. These airborne illnesses that these children contract, have to end up going to the emergency room, it costs schools hundreds of millions of dollars, costs parents lost days of work, it impacts our economy. That’s why we must tackle this issue head-on. And I think we’re doing so in the state of California.

AMY GOODMAN: And your response to what happened in Washington, D.C., the House voting to block federal rules to cut power plant emissions, only hours after President Obama delivered his climate speech here in Paris?

SEN. KEVIN DE LEÓN: Well, I want to give lots of credit to our president, Barack Obama. Unfortunately, he’s had to move forward with our public policies through the executive level, through executive decision making, because he has no partners at the legislative level in the Congress. I am very concerned that Washington, D.C., specifically the Congress, has yet to recognize climate change as a reality. That’s why, as a subnational, that’s why the seventh-largest GDP on planet Earth, the state of California, is not going to hold its breath for the congressional members to take action. We’re going to take action on our own.

AMY GOODMAN: I mean, repeat that, because we’re in a global space right now, here in Le Bourget, which is right north of Paris at the COP21—how California, not the entire country of the United States, how large its economy is in the world?

SEN. KEVIN DE LEÓN: We are the seventh-largest GDP on planet Earth. To put this in context, the number one GDP, obviously, is the United States, as a whole, in the aggregate; two, China; three, Japan; four, Germany; five, France; number sixth, it’s the U.K.; and number seven, it’s the great state of California. Our economy is larger than every other nation minus six nations on planet Earth. So to put this in context, we have added 500,000 new jobs in the clean energy space, energy efficiency, as well as renewables. What we’re trying to accomplish in California is we’re trying to recalibrate a new economy of tomorrow that’s clean, that’s cheap, that puts people to work. And that’s what we’re trying to calibrate, because we’re not waiting for Washington, D.C., because, unfortunately, they have yet to deal with this in a very responsible manner.

AMY GOODMAN: Bill McKibben, co-founder of 350.org. We just heard your colleague, May Boeve. How significant is the divestment movement right now?

BILL McKIBBEN: Amy, you were the first person almost to cover this movement. You remember three years ago when it was me writing in Rolling Stone, you know, with Justin Bieber on the cover. The same argument now, because of the divestment movement, the argument that these companies have more carbon in their reserves than we can burn, that’s no longer Rolling Stone. That’s now the conventional wisdom the world over. There are great leaders like Kevin de León. There are people like the governor of the Bank of England, like the people at Deutsche Bank, like the IMF, like the World Bank, really this whole COP now, understanding that we have to leave most fossil fuel in the ground, and that when we do, those fossil fuel companies are going to be worth a lot less.

BILL McKIBBEN: So, the great moment came a year ago when the Rockefeller family, heirs to the greatest fossil fuel fortune on Earth, began divesting. And after that, it was as if the dam broke. Clearly, the most important thing that’s happened in the States, in terms of divestment, was what happened in California. Those are—we’re talking half a trillion dollars worth of pension funds. And thank God they got out when they did. They’ve lost $5 billion in California by not divesting three years ago. It’s one of the reasons that it was possible for Senator de León to rally his colleagues to do the right thing now.

AMY GOODMAN: As we wrap up, state Senator Kevin de León, some might say, “What are you doing in Paris? You should be back in California.”

SEN. KEVIN DE LEÓN: Well, I say this, is that Washington, D.C., other than our president, is taking action. The Congress, the Republican-dominated Congress, have not. This is not necessarily a partisan issue. It’s not an ideological issue. This is a scientific issue, therefore it is a political issue, because there is a lack of political leadership in the Congress and Washington, D.C. Therefore, we’re not going to wait for them to act. Again, California is the seventh-largest economy in the world. What California does, first and foremost, to the rest of the country, as well as the rest of the world, follows closely what happens in California, therefore we’re moving forward with our public policies.

AMY GOODMAN: And as we wrap up, how has climate change affected California?

SEN. KEVIN DE LEÓN: Well, I’ll tell you one thing right now, you don’t have to look farther than California to see how, the devastating impacts. We’re in our fifth year of a record drought in California, so we have the crisis of water. We have farm workers who are currently unemployed and in food lines in the Central Valley because there’s no water. If there’s no water, there’s no jobs. It’s that simple. We have devastating fires. We have spent, from our general fund, upwards—up to $4 billion—that’s with a B, $4 billion—fighting these forest fires. I’d rather spend $4 billion investing in children, in public education, investments in higher education, than combating forest fires due to climate change because of the drought in California.

AMY GOODMAN: Thanks so much. I want to thank you for being with us.

AMY GOODMAN: Kevin de León, president pro tem of the California Senate, he led the effort in California state Senate to pass a resolution to divest two of the world’s largest pension funds. And Bill McKibben, please stay with us. This is Democracy Now!, democracynow.org, The War and Peace Report We’ll be back in a minute. 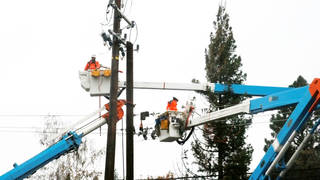