February 21 marks the 50th anniversary of when Malcolm X was shot to death on February 21, 1965, at the Audubon Ballroom in New York City. He was only 39 years old. Details of his assassination remain disputed to this day. Look back at Malcolm X’s life and legacy by browsing Democracy Now! coverage over the years. Above we feature his speech “By Any Means Necessary,” and below you can browse more of his speeches, as well as interviews with scholars, journalists, activists and his biographer Dr. Manning Marable–as well as a debate on Marable’s book. Click here for a debate between Malcolm X and James Baldwin, and click here to see all of our coverage.

Malcolm X: The Ballot or the Bullet

Manning Marable on 'Malcolm X: A Life of Reinvention'

Grace Lee Boggs on Malcolm X: 'He Was a Person Always Searching to Transform Himself' 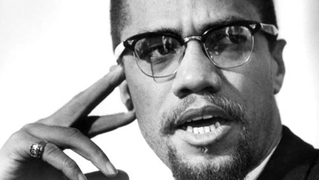