The University of Oklahoma has expelled two student fraternity members it says led a racist song caught on video. Members of Sigma Alpha Epsilon are seen on a bus singing a song that includes a racial slur and a vow that no black people will ever join their group. The school says the two students who allegedly led the song were expelled for creating “a hostile learning environment” and that all those involved “will learn … it is wrong to use words to hurt, threaten, and exclude.” Hundreds of students have marched at the school in a show of protest against racism. We are joined by Rashid Campbell, a senior at the University of Oklahoma who has been participating in the protests against the Sigma Alpha Epsilon fraternity; and Tracie Washington, president and CEO of The Louisiana Justice Institute.

Web ExclusiveMar 13, 2015How Should Universities Respond to Racist Incidents on Campus?

NERMEEN SHAIKH: The University of Oklahoma has expelled two student fraternity members it says led a racist song caught on video. Members of Sigma Alpha Epsilon are seen on a bus singing a song that includes a racial slur and a vow that no black people will ever join their group. The school says the two students who allegedly led the song were expelled for creating, quote, “a hostile learning environment” and that all those who were involved, quote, “will learn … it is wrong to use words to hurt, threaten, and exclude.” Hundreds of students have marched at the school in a show of protest against racism.

AMY GOODMAN: Joining us from Oklahoma City is Rashid Campbell, senior at University of Oklahoma who’s majoring in African and African-American studies. He’s been participating in the protests against the Sigma Alpha Epsilon fraternity over the racist song. And with us from New Orleans is Tracie Washington, president and CEO of The Louisiana Justice Institute. She is a well known civil rights attorney in New Orleans. And staying with us here in New York, Vince Warren of the Center for Constitutional Rights.

But, Rashid, we’re going to go to you first in Oklahoma City. Lay out what has taken place there. Explain what this fraternity is, the song that was sung, the words that these young men on a bus were singing.

RASHID CAMPBELL: Well, I mean, exactly what has been—what is happening is that the song and the chant that the fraternity is singing is a chant that has been taught to them by their elders or the older people in their fraternity. I have been given information to know that the song has been handed down, and it’s not just this chapter at the University of Oklahoma, but it’s also chapters around the country who have similar chants, if not the same chant, taught to them.

What has happened is, is when the fraternity went on a date party, the video was leaked of the chant, and the school and everybody in the country at large were able to see the content of what was being said behind doors. As soon as this information leaked, a lot of people and students at the University of Oklahoma were explaining the ways that a lot of these things were already happening and how people were making complaints. Now, those complaints were not able to necessarily, I think, be engaged with the right way, and a lot of administrators were reluctant to engage inside of the racism claims that people were making because they didn’t have proof. And I think the video provides proof. As soon as the video provided proof, people, students like myself, were able to mobilize and, like you said, marched in protest to show and symbolize the ways that the OU at large and the real Sooners, so to say, were not going to stand for the injustices that have been perpetuated.

AMY GOODMAN: The song’s lyrics are filled with the N-word, include the racial slur, avow no black people will ever join the fraternity, SAE.

RASHID CAMPBELL: Yes, ma’am, I think they should have been expelled. And I also think we should be doing investigation in other areas of the university to where these things are being perpetuated. I know a lot of people were confused from the fact that they knew some of these students on campus and had class with them. These students had relationships with other people of color, even outside of African-American. But I think the truth is, and what is going on, is that regardless of the ways that I think people are showing themselves on campus, there is a lot—many things going on behind the scenes that need to be investigated and pursued to find the truth in the ways that we deconstruct the ways that racism is perpetuating itself. I think if only students celebrate black or African-American—if only white students celebrate African-American students when it comes to football or entertainment, then there is a problem, because in every other instance it’s demonized, or it’s criticized, or, like you hear within the chant, it’s—I guess, for a lack of a better term, it’s spoke about in a terrible way, to where you understand the innate and internal feelings of a person, which generally would explain the reasons to why there is a tension and a perpetuation of racism in different—in other industries and structures on the university and the community at large.

NERMEEN SHAIKH: Tracie Washington, could you explain how you think the university should have responded to this incident?

TRACIE WASHINGTON: [inaudible] students. And thank you, Amy, for having me on the show. Respect the students for the organizing that’s happened. I wrote a blog piece stating that, as an adjunct professor, as an organizer, as a civil rights attorney and as a mom of a 22-year-old who is a college senior, I understand that first impulse to say, “We’re going to get rid of this. You know, we’re going to get rid of this chapter, and we’re going to get rid of these students. We’re going to expel them.” I would have wanted President Boren to take a step back and to breathe and to say, “We get kids on a college campus who are not formed, fully formed, adults, and it’s our responsibility to go a little bit far. What these students did, what they are chanting is disgusting, but it cannot,” as Rashid said, “be only them. We’ve got to heal our campus, and we’ve got to educate our campus on anti-racism.” And that campus includes the entire community—the students, the faculty, the staff—and even those students, even those students who made those disgusting chants, because expelling them, sending them into the world not understanding fully how to be anti-racist, doesn’t do anything for society. But it could lift up that university and that campus to understand how to grow better people.

TRACIE WASHINGTON: And that’s what I wanted to [inaudible]—

RASHID CAMPBELL: I would say, the first thing is that I have a personal relationship with President Boren, and when I spoke to him, I think his reactions were spot-on. I think the fact that he was passionate and emotional in the ways that he wanted to be symbolically showing—

AMY GOODMAN: We have 10 seconds, Rashid.

RASHID CAMPBELL: In the ways that he wanted to show how he wanted to create, I guess, a statue or symbolization to say we’re not going to stand for something, I think that’s great. The thing that I want to say is it’s true that these kids need to be educated, and we have students that are not from communities that know about racism, but I think it is our duty to say what we’re standing for and what we’re not going to stand for. I think there needs to be implementation for other students in classes to have them teach racist activity and educate them on racist structures and how they cannot perpetuate those things.

AMY GOODMAN: We’re going to continue this discussion in put part two online. We’d like people to respond. Rashid Campbell, thanks for joining us. Thanks so much to Tracie Washington. And thanks, Vince Warren.

How Should Universities Respond to Racist Incidents on Campus? 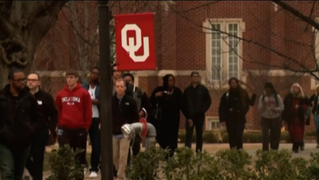 How Should Universities Respond to Racist Incidents on Campus?