As Video Captures Officers’ Fatal Shootings of Unarmed Men, Knowing Your Rights to Film the Police

Over the past week, video of police killings of unarmed African Americans in South Carolina and in Oklahoma has led to charges against the officers who fired the fatal shots. Meanwhile, 10 sheriff’s deputies have been suspended in California after a news helicopter filmed them kicking and punching a suspect as he lay face down in the desert after a chase. As video proves decisive in holding police accountable for abuses nationwide, we are joined by Jay Stanley, senior policy analyst with the Speech, Privacy and Technology Project at the American Civil Liberties Union. He authored “Know Your Rights” for the ACLU, and its companion article, “You Have Every Right to Photograph That Cop.”

StoryAug 28, 2014After Police Abuses Caught on Video, a New Guide Teaches How to Best Archive and Distribute Footage

JUAN GONZÁLEZ: Cries of “Black Lives Matter” continue to ring out across the country after new police killings of unarmed African Americans. A funeral was held in North Charleston, South Carolina, Saturday for Walter Scott, the black man who fled a traffic stop and was fatally shot in the back by police officer Michael Slager. Video of the incident taken by a bystander forced the police to retract their initial defense of Slager and see him charged with murder and fired from the force. This comes as Oklahoma prosecutors have charged a sheriff’s reserve deputy with second-degree manslaughter in the fatal shooting of an unarmed African-American man in Tulsa. Robert Bates, who is white, says he mistakenly used his handgun instead of his stun gun, killing the victim, Eric Harris. The incident was recorded by a police body camera.

On the heels of the police killings of Walter Scott and Eric Harris, activists have launched a nine-day march from New York City to Washington, D.C., to call for sweeping criminal justice reform. The 250-mile “March 2 Justice” seeks an end to racial profiling and militarized policing as well as the dismantling of, quote, “the societal and institutional pillars of mass incarceration.”

AMY GOODMAN: Meanwhile, videos also led to suspensions of 10 sheriff’s deputies in California. A news helicopter filmed the deputies kicking and punching Francis Pusok as he lay face down in the desert after a chase. The FBI is investigating whether his civil rights were violated.

As video proves decisive in holding police accountable and the Black Lives [Matter] movement responds to more deaths, we’re joined by a guest in South Carolina, Muhiyidin d’Baha, an organizer of Black Lives Matter in Charleston. In Washington, D.C., we’re joined by Jay Stanley, a senior policy analyst with the ACLU’s Speech, Privacy and Technology Project. He authored “Know Your Rights” for the ACLU, and its companion piece, “You Have Every Right to Photograph That Cop.”

I want to start with you, Jay. What about the rights? You know, Walter Scott’s brother, Anthony Scott, said he went back to the scene after Walter Scott was killed by police officer Michael Slager. And he was taking photographs, and the police confiscated his camera. The young man, Santana, who actually filmed this whole thing, is remarkable. But what are people’s rights? When do they get arrested? Do they have to give up their cameras?

JAY STANLEY: Yeah, the courts have been crystal clear on this matter: You have a right, under the First Amendment of the Constitution, to take photographs or video of anything in public when you’re in public. And there have been attempts in some states to pass laws curbing this right. They have been struck down by the courts, and the Supreme Court has refused to review those rulings striking down those kinds of laws. So there’s no ambiguity about the law.

The only problem is, is that a lot of police officers continue to think that they can go up to you and say, you know, “You need to turn that camera off, ma’am.” That is not a lawful order. It’s not a constitutional order. But it’s one that continues to happen all too often. And they certainly don’t have the right to look at your camera or seize your phone without a warrant. And they never, ever, under any circumstances that we can imagine, have the right to destroy or erase your video or photographs. 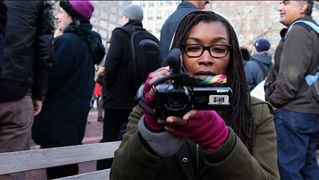 After Police Abuses Caught on Video, a New Guide Teaches How to Best Archive and Distribute Footage