Protests were held from coast to coast on Tuesday in a day of action against police violence and racial profiling. The protests came as the sheriff’s reserve deputy, who fatally shot Eric Harris in Oklahoma, turned himself in to authorities. Robert Bates said he thought he was using his Taser instead of his gun when he killed Harris earlier this month. Bates is a wealthy insurance executive and heavy donor to the Tulsa Police Department, who gets to volunteer on the force as a reserve. Meanwhile, the South Carolina police officer charged with murder for fatally shooting Walter Scott will probably not face the death penalty if he is convicted. Prosecutors say Michael Slager would still be eligible for a sentence of life in prison. We are joined by Khalil Muhammad, author of “The Condemnation of Blackness: Race, Crime, and the Making of Modern Urban America,” and director of the New York Public Library’s Schomburg Center for Research in Black Culture.

AMY GOODMAN: On Tuesday, protests were held from coast to coast in the United States in a day of action against police violence and racial profiling. The protests came as the sheriff’s reserve deputy who fatally shot Eric Harris in Tulsa, Oklahoma, turned himself in to authorities. Robert Bates said he thought he was using his Taser instead of his gun when he killed Harris earlier this month. Video of the incident was released over the weekend. Major Shannon Clark of the Tulsa County Sheriff’s office said the shooting was a mistake.

MAJ. SHANNON CLARK: Mr. Harris fled. He disobeyed the orders of law enforcement. He attempted to flee from capture. And when he was attempting to be subdued and still in a ground combat with deputies, this Deputy Bates approached, and he attempted to use a less lethal device. Inadvertently, he used his handgun instead.

AMY GOODMAN: Robert Bates has been charged with second-degree manslaughter. He was released on $25,000 bond. If convicted, he faces a maximum of four years in prison, a fine of $1,000. On Tuesday, Andre Harris, questioned the police version of his brother Eric’s death.

ANDRE HARRIS: If he had as much training as he supposedly had, he would definitely know a .357 from a Taser. He didn’t have to. This is something that either he didn’t really think about, or he just—he just decided that he just wanted to shoot, and he would worry about it later.

AMY GOODMAN: Robert Bates is a wealthy insurance executive and heavy donor to the Tulsa Police Department who gets to volunteer on the force as a reserve. Meanwhile, authorities said the South Carolina police officer charged with murder for fatally shooting Walter Scott will probably not face the death penalty if he’s convicted. Prosecutors say Michael Slager would still be eligible for a sentence of life in prison. On Tuesday, several members of Congress took to the House floor to denounce police misconduct. Georgia Congressman Hank Johnson called for congressional action.

REP. HANK JOHNSON: It feels like open season on black men in America, and I’m outraged. In fact, all Americans are at risk when bad actors in law enforcement use their guns instead of their heads. Despite bipartisan, nationwide calls for action, and despite my bills to reform the broken grand jury process, hold police accountable and end militarization, and despite my colleagues’ bills to encourage body cameras, this Congress does nothing—no hearings, no blue ribbon commissions, no nothing.

For more, we’re joined by Khalil Muhammad, author of the book, The Condemnation of Blackness: Race, Crime, and the Making of Modern Urban America. He’s director of the New York Public Library’s Schomburg Center for Research in Black Culture, also a visiting professor at the CUNY Graduate Center.

Welcome to Democracy Now! It’s great to have you with us, Khalil.

AMY GOODMAN: Hank Johnson, what he just said, this litany of names?

KHALIL MUHAMMAD: Reminds me of the roll call of the annual almanac of lynching victims. Tuskegee Institute, now University, used to publish it every year. And their primary goal was to acknowledge and provide data for the evidence of the unjustness and the lives taken by vigilantes, as well as state actors, every year, year after year, decade after decade. And so, here we are again, nearly a hundred years after the lynching era began, and we are faced with the same crisis, because we’ve not dealt with the underlying issues.

AMY GOODMAN: That connection that you see—you know, Bryan Stevenson just did a big report on lynching in America. What are the connections that you see? I mean, we’re talking about police in the United States.

KHALIL MUHAMMAD: Yeah, so most of the lynching era turned on both the personal responsibility of the individual who was lynched, their alleged criminality, and in some cases, their actual criminality. And in every instance, the mob was kind of an unfortunate response. It was a set of individual actors who took the law into their own hands. The system was never on trial in the way that it should have been, except for African Americans who led anti-lynching campaigns. In 1934, for example, Howard University students, as members of the NAACP, protested outside of the White House. Then, President Franklin Delano Roosevelt, his attorney general had a National Commission on Crime. And for them, if they were having a national conversation about crime in America, which was ostensibly about bank robbers, should have also been about lynch mobs, and it wasn’t. And they pointed out then, in our contemporary moment about Black Lives Matter, that black lives do matter, and those students stood there with nooses around their neck to indicate this. There is no question that the failures of the lynching era were the failures to take systematic account that Jim Crow America legitimated the kinds of actions that we saw time and time again.

AMY GOODMAN: I wanted to ask you not only about the shooter in the case of Michael Slager in South Carolina, or in the case of Robert Bates, who is 73 years old. And, by the way, The Daily Beast has an interesting piece on him. You know, he’s 73 years old. “Hours before the Tulsa County district attorney charged Bates with second-degree manslaughter … Sheriff Stanley Glanz defended the deputy … his longtime friend [who] served as his insurance agent and onetime election campaign chair. … Glanz also showed a Tulsa World reporter cellphone photos of him fishing with Bates, a millionaire insurance executive. [He said, 'We] both love to fish. … Is it wrong to have a friend?' Still, former officers with the sheriff’s department told The Daily Beast that Bates was a 'pay to play' policeman. The businessman donated thousands of dollars worth of vehicles and equipment to the force.”

Now, when he shot and killed Eric Harris, he said, “I shot him. I’m sorry.” After that, the police have him down. They are handcuffing him on the ground. And as he says that he can’t breathe, one of them says, “F— your breath.”

AMY GOODMAN: So they know that he has been shot with a real gun. It’s not just the shooter. What about the other police officers? Same with Eric Garner. There’s the one who put him in a chokehold, Daniel Pantaleo—

AMY GOODMAN: —but then there’s all the others that are holding him down.

KHALIL MUHAMMAD: Well, I think it’s the culture, right? So, again, we want to either talk about rotten apples, in the case of Mr. Bates, who is the shooter, but we ignore, as you just pointed out, that the space in which policing happens is a space that looks much more like how we treat enemy combatants. If you’re an occupying army, then the rules of engagement are such that any perceived threat is a legitimate response for execution. We have police officers who not only are judge, jury and executioner, but also celebrate victory in the annihilation of people who have posed an ostensible threat to them. So, we really have to look at the contradiction between the coziness of an individual who pays to be on the police force and the total alienation of the police from the members of the community that they are there to protect and serve. That gap has grown greater than it has ever been.

AMY GOODMAN: Khalil, what do you think needs to happen?

KHALIL MUHAMMAD: Well, I think that, as so many have called for, we have to get past this need for commissions and data analysis, and really transform our political culture that makes this OK. We have a problem in America where majoritarian rule simply says that the 14th Amendment, that was established to protect black lives—not all lives; the 14th Amendment, that gave us civil rights, was established to protect black lives. If we don’t teach that and come to terms with that in our political culture, then we’re stuck with a generation after generation wrestling with this. There are no shortcuts to that. So that is political work, that is educational work. And we absolutely need to hold all police actors accountable for the crimes that they commit when they engage in criminal behavior.

AMY GOODMAN: Right now you have the protests that are taking place around the country. A number of people were arrested, feeling that there is no accountability. The issue of studies, even knowing who is killed by police in this country—often those who defend the police say, “We don’t even have figures on this.” Is that an actual defense?

KHALIL MUHAMMAD: Well, it’s not a defense because, again, the search and chase for data, if we start to collect it, then people will—our criminologists and others and our state officials will say, “Well, last year, we saw a 5 percent reduction in police killings.” So, on one hand, it seems commonsensical that we should know this number, and the fact that we don’t is evidence of the ideology that tells us what’s important and what’s not. But at the same time, once we establish it, then we’ll be debating whether there was a 5 percent increase or a 5 percent reduction, which, frankly, won’t change the underlying problem.

AMY GOODMAN: Well, we are going to continue this discussion. And, Khalil Muhammad, I want to thank you for being with us, director of the New York Public Library’s Schomburg Center for Research in Black Culture, author of The Condemnation of Blackness: Race, Crime, and the Making of Modern Urban America. 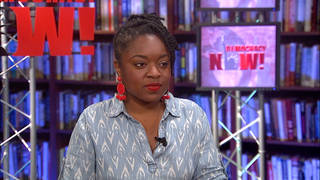 “Unapologetic”: Charlene Carruthers on Her Black, Queer and Feminist Mandate for Radical Movements