“By Any Means Necessary”: Remembering Malcolm X on His 90th Birthday

Ninety years ago today, on May 19, 1925, Malcolm X was born in Omaha, Nebraska. He would go on to become one of the most influential political figures of the 20th century. We hear Malcolm X in his words speaking in 1964 — half a year before his assassination — delivering his famed speech, “By Any Means Necessary.”

AMY GOODMAN: Today we go back 90 years, to May 19, 1925. Malcolm X was born in Omaha, Nebraska. He would go on to become one of the most influential political figures of the 20th century. So we end today’s show with Malcolm X in his words speaking in 1964, half a year before his assassination, delivering his famed speech, “By Any Means Necessary.”

MALCOLM X: One of the first things that the independent African nations did was to form an organization called the Organization of African Unity. […] The purpose of our […] Organization of Afro-American Unity, which has the same aim and objective to fight whoever gets in our way, to bring about the complete independence of people of African descent here in the Western Hemisphere, and first here in the United States, and bring about the freedom of these people by any means necessary. That’s our motto. […]

The purpose of our organization is to start right here in Harlem, which has the largest concentration of people of African descent that exists anywhere on this Earth. There are more Africans here in Harlem than exist in any city on the African continent, because that’s what you and I are: Africans. […]

The Charter of the United Nations, the Universal Declaration of Human Rights, the Constitution of the United States and the Bill of Rights are the principles in which we believe, and that these documents, if put into practice, represent the essence of mankind’s hopes and good intentions; desirous that all Afro-American people and organizations should henceforth unite so that the welfare and well-being of our people will be assured; we are resolved to reinforce the common bond of purpose between our people by submerging all of our differences and establishing nonsectarian, constructive programs for human rights; we hereby present this charter:

The Organization of Afro-American Unity shall include all people of African descent in the Western Hemisphere […] In essence what it is saying, instead of you and me running around here seeking allies in our struggle for freedom in the Irish neighborhood or the Jewish neighborhood or the Italian neighborhood, we need to seek some allies among people who look something like we do. And once we get their allies. It’s time now for you and me to stop running away from the wolf right into the arms of the fox, looking for some kind of help. That’s a drag.

Since self-preservation is the first law of nature, we assert the Afro-American’s right to self-defense.

The Constitution of the United States of America clearly affirms the right of every American citizen to bear arms. And as Americans, we will not give up a single right guaranteed under the Constitution. The history of unpunished violence against our people clearly indicates that we must be prepared to defend ourselves, or we will continue to be a defenseless people at the mercy of a ruthless and violent, racist mob.

AMY GOODMAN: That was Malcolm X speaking in 1964. He would be assassinated at the Audubon Ballroom on February 21st, 1965. Today, if he had lived, he would have been 90 years old. 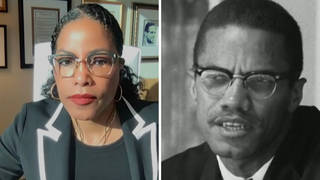